Waiting for the future?

Nano-, micro-, and two-dimensional HPLC are already proving their worth

A major topic during the HTC conference held in Bruges, which is focused on issues relating to hyphenation processes involving HPLC and innovative detection techniques, was the discussion concerning system volumes of modern UHPLC systems. It is again clear, according to many experts at least, that column and particle technology has outperformed the capabilities of modern UHPLC instruments. Several people stressed that using columns with an internal diameter of less than 2.1 mm is not a good idea, since the system volumes associated with modern separation devices remain too high in spite of the great progress made in recent years [1]. Unfortunately, the discussion failed to mention the fact that micro- and nano-HPLC systems with a gradient dwell volume and dead volumes of less than a microlitre have been available for many years already. These devices, however, have yet to really grab the attention of either users or systems theorists. The present article is therefore intended to help fill this gap.

No one would disagree that the separation performance theoretically available with modern stationary phases only really comes into play if the various volumes responsible for band broadening outside the separation column are significantly reduced. In view of this, the experimental setup depicted in Figure 1 was intended to establish whether it is possible to use nano-columns in combination with a micro-LC system and a conventional mass spectrometer. A monolithic column from Merck with an internal diameter of 100 µm was used. This was connected via a filter with the injector of the micro-LC system and the emitter tip of the mass spectro­meter. For this experiment, an older device from AB Sciex (QTrap 3200) was used. An emitter tip with an internal diameter of 25 µm was used to minimise band broadening after the column. The tip can be changed in a matter of minutes with little effort.

Fig. 1 Experimental setup for hyphenating Eksigent micro-LC, Merck CapRod, and AB Sciex QTrap 3200. The enlarged area shows the connection of the separation column between the injector and emitter tip of the mass spectrometer.

As can be seen in the system setup in Figure 1, the column acts as a transfer capillary between the injector and ion source of the mass spectro­meter. Since the column manufacturer recommends the pressure should not exceed 200 bars, the flow rate was set to 5 µL min-1. Figure 2 compares the separation of around 50 pharmaceutically relevant compounds. In the first case, separation was achieved with a conventional HPLC system and a monolithic stationary phase with an internal diameter of 2.0 mm. In the second case, the experimental setup shown in Figure 1 was selected. The peak widths show no evidence of significant band broadening if a nano-separation column is used. This result may be surprising at first, particularly with no modifications being required to the ion source of the mass spectrometer in order to use this in a low flow rate range. It must be stressed, however, that a reduction of the internal diameter of the separation column to 100 µm is only possible with specially designed micro- or nano-HPLC-systems. Nevertheless, these have been available from many manufacturers for a number of years now. It is also absolutely essential to minimise dispersion after the separation column as much as possible. Unless the internal diameter of the emitter tip is adjusted, it is not possible to use nano-columns with the setup selected. Another clear benefit of the miniaturised approach is the amount of solvent used. This amounts to just one per cent compared with conventional separation.

Whereas one-dimensional separations are well established for target analysis, two-dimensional liquid chromatography is playing an ever more important role for screening analyses and identification of biomarkers from complex samples [2]. In addition, these processes may generally be used in the context of suspected or non-target screening in the field of water and wastewater analysis. Such forms of analysis strategy have been the subject of ever more frequent discussion in recent years. 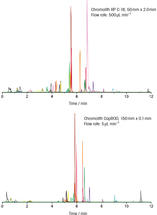 Fig. 2 Comparison of the separation of around 50 pharmaceutically relevant compounds based on a conventional HPLC-MS coupling (top chromatogram), along with the experimental setup shown in Figure 1 (bottom chromatogram).

It is against this background that a two-dimensional LC x LC system consisting of a nano- and micro-LC in the first and second separation dimension was developed on the basis of Eksigent technology [3]. The system, as described in the publication by Haun et al., was specifically modified to meet the requirements of water or wastewater screening analyses. As such, a phase consisting of graphitic carbon from Thermo was used in the first separation dimension. This material is not only suitable for obtaining a high retention of polar substances, it also yields a different selectivity compared with traditional silica-based C18 phases. Figure 3 shows a 3D plot for a wastewater sample, in which the x- and y-axis show the retention times for each separation dimension and the z-axis shows the intensity. It is clear that two-dimensional separation ensures the peaks are distributed across the area available. If a Q-TOF mass spectrometer is used, it becomes possible to identify analytes on the basis of their molecular formula as well as the fragmentation pattern. Further investigations are now concerned with the question of whether the technological approach outlined here is superior to a conventional one-dimensional separation process based on columns with an internal diameter of 2.1 mm [4]. 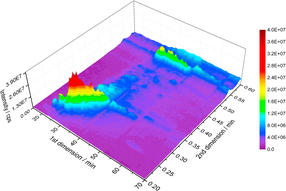 Fig. 3 3D plot showing LC x LC separation of a wastewater sample. More detailed information is contained in the item listed under [3] in the bibliography.

The examples set out here highlight the enormous potential of miniaturised separation techniques. The use of nano- and micro-LC allows to significantly reduce the amount of toxic and expensive organic solvents. In addition, the compact nature of these systems ensures an optimal coupling is obtained between the separation column and the mass spectro­meter. This makes it possible to eliminate critical system volumes, which lead to band broadening and thereby lead to lower chromatographic resolution. The authors do not believe it is necessary to ‚wait for the future’ in terms of the availability of miniaturised separation systems delivering great performance. These kinds of device have been commercially available for several years now.

Acknowledgement: The authors would like to thank Dr Karin Cabrera and Dr Stephan Altmaier from Merck for providing monolithic columns.