Trend barometer: taking the underground to the airport

Hyphenations in HPTLC – the potential for efficient analysis

Yes – you can talk about an ‚underground system’ in terms of analysis. Many samples are forwarded in parallel – including unstyled raw extracts in any condition. The connection to the airport is assured and today molecules can fly in a myriad of different ways. 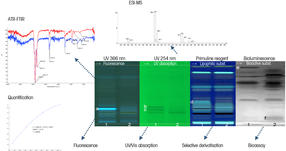 Faster characterisation of samples is now possible with high-performance thin-layer chromatography (HPTLC) in combination with bioassays, derivatisation reagents and spectroscopic or spectrometric detection options (Fig. 1). A very interesting branch is effect-directed analysis, which combines chromato­graphy with aqueous bioassays but still maintains sharp separation zones (Fig. 2). A team of experts is currently devising the planar Yeast Estrogen Screen (pYES) bioassay to be used directly in combination with HPTLC. Substances with an oestrogen-like action are directly identified in complex mixtures. Is it not in the general interest to establish which everyday foods are pharmacologically active and how they compare with drugs? If an active substance is found, it flies directly into the high-resolution mass spectrometer – only what is active and therefore important is selected on a targeted basis. No pointless flights take place.

Fig. 2 White substance zone with an antibiotic action in a plant extract after immersion in a suspension of Bacillus subtilis bacteria and a substrate of tetrazolium salt (track 2; compared with fluorescence detection at 366 nm for track 1).

This is the actual strategy (Fig. 3) which – only in the last five years – has been facilitating fast characterisation of the zone right through to the sum formula obtained by commercially available ambient mass spectro­metry processes, such as LESA, DART, DESI and TLC-MS Interface as well as MALDI (Fig. 4). The direct scanning of ATR-FTIR spectra from zones via the versatile TLC-MS Interface was also demonstrated [1]. Similarly, the possibility of NMR spectra scanning was discussed [2] and briefly demonstrated [3]. As such, important analytical processes are connected to HPTLC on an analytical scale. Over the coming years, this new kind of analytical platform will see actual examples of applications. 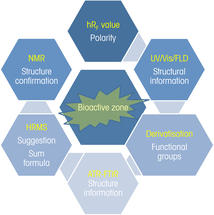 Fig. 3 From the bioactive zone to the structure: hyphenations for effect-directed analysis at an analytical level.

A deeper look at research reveals something unanticipated: the new discipline of Office Chromatography [4] combines the advances made by innovative printing and media technologies with miniaturised separation materials. Novel electrospun [5], nanostructured [6], or monolithic layers [7] are also considered in a business card format. Researchers have been trying to work out how to make these synergies more efficient. It is possible to perform many sample analyses in parallel in anything from one to just a few minutes, which means, in purely mathematical terms, that individual separations take less than a second. 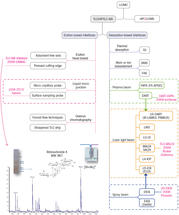 Events always represent an ideal opportunity to discover whether high-performance thin-layer chromatography would be a suitable solution for one’s own analytical problems or challenges. For example, more than 333 participants from over 40 countries attended the last HPTLC symposium during 2011 in Basel. HPTLC 2014 will be held in Lyon between 2 and 4 July 2014.

How to analyze active unknown unknowns?

More than ever, consumers are concerned about the food they consume. For example, for botanical extracts used in food products and food supplements, fraud is quite common. It is evident (…)