Water instead of mineral oil

Innovation in chiral catalysis – A milestone for the pharmaceutical industry

Optical active substances made from chiral catalysis form the basis of many drugs. Expensive precious-metal catalysts are required for the chemical production, which due to their thermal instability decompose at high temperatures and can therefore only be used once. The innovative process of DexLeChem GmbH makes it possible for the first time to use these precious-metal catalysts made from rhodium, ruthenium or iridium more than once, without modifying them. At the same time, reaction occurs in aqueous solutions instead of mineral-oil-based solvents, which increases the sustainability of the process. This is a milestone in catalysis and a real opportunity for the pharmaceutical industry.

One half of the pharmaceutical industry’s global turnover is obtained through chiral active substances [1]. Chiral molecules have special spatial properties. They behave as an image and its reflection (enantiomers). The property of molecules being able to form enantiomers is called chirality (cheir =hand; Greek). As various enantiomers in the body can often cause a wide variety of reactions, it is important to ensure that only the structure with the healing active substance is present, i.e. that the active substance is enantiomerically pure. Currently, 70 % of all newly licensed drugs are manufactured to be enantiomerically pure, and the trend is increasing [2].

For the manufacture of chiral molecules through homogeneous catalysis, expensive precious-metal catalysts from the platinum group are frequently used, such as rhodium, iridium, ruthenium or palladium, whose complex chiral ligand shells have been laboriously synthesized [3]. In homogeneous catalysis, the reactive materials are present with the catalyst in a single phase during the reaction time. At the end of the reaction, the catalysts cannot easily be separated from the manufactured products and recovered from the solvents used [4]. According to the current state of technology, the product and the solution are generally separated using distillation. High levels of energy must be applied to the solution to achieve this. This leads to the decomposition of the active catalysts; due to their thermal instability at high tempe­ratures, they can only be used for one batch [5]. The catalysts become a waste product, from which only the inactive precious-metal fraction can be recycled from the catalyst residue. This is not inconsiderable with catalyst costs reaching several 100,000 euros per kilogram [6]. DexLeChem has developed a procedure that allows the repeated use of catalysts (re-using). Based on various European patent applications, the company has developed a tailor-made re-using process for industrial catalysts. DexLeChem was split off from the Unifying Concepts in Catalysis (UniCat) excellence cluster at the Berlin University of Technology and is now a leader in the field of catalysis. 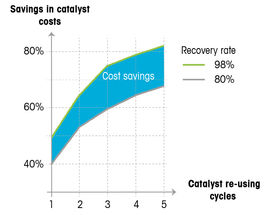 Chiral chemical catalysts are characterised by both the high degree of purity of the product obtained and by the high efficiency of use of the raw materials. So compared with other process variants, in which the catalysts are not present in a dissolved state but are bonded to solids, ­significantly higher product quality is achieved through the use of dissolved metal complexes [7]. As catalysts only support the production of chiral active substances and do not themselves become part of the product, they can in theory be used as often as required. (However, in reality, due to various factors, each catalyst has just one finite lifespan.) The development results of DexLeChem show that in practice catalysts can be re-used five times without any loss of activity and can be used industrially.
It is important to note here, however, that even a single re-using of a catalyst can produce a significant cost saving. Almost 50 % of the catalyst costs are saved in a single re-using at a catalyst recycling rate of 98 %. A second re-using results in a cost saving of 65 % (Fig. 1).

Based on quantum chemical calculations, it is possible to access catalyst details at a molecular level and thus obtain a better understanding of catalytic cycles (Fig. 2). This is, in turn, the basis for further developments in the laboratory. In order to ensure that these calculations do not become research projects themselves, DexLeChem is using a combination of various methods. In this way, it will be possible to quickly delimit the solution space being investigated. 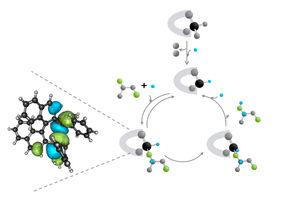 Water instead of mineral oil: ­Reactions in aqueous solutions

Numerous solvents used today in industry and research have negative eco-indicators, so new approaches are required [8]. In addition to the re-using of catalysts, the use of sustainable solvents is therefore essential.

One possible process design is to replace some of the mineral-oil-based solvents with water, plus solubiliser (such as medium-polar solvents) as the main-reaction media. The solubilisers are important in order to transfer unmodified ligands a substrates, which are often very hard to dissolve in water, into the aqueous solution. The product is then separated using a sustainable organic solvent.

In addition, there remains the possibility of carrying out reactions in an organic phase and then removing
the product from the catalyst solution through aqueous extraction. The selection of the right additive is crucial here for good product/catalyst separation (Fig. 3). 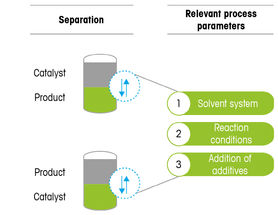 Through skilful selection of the solvent system, the phase behaviour of binary and ternary phases can be controlled by adding an extraction solvent.

This is because: “In an ideal case, a reaction medium should be homogeneous during the reaction and facilitate an optimal course of reaction without the effects of mass transport, and be able to be switched to a two-phase system for the product separation.” [9] “Solvent systems that can be controlled by temperature are called thermomorphic”.

Here the process starts with a mixture of water, an organic phase and a solubiliser. This mixture is homogeneous, i.e. single phase at a specific, generally higher, temperature. With a slight temperature change, a heterogeneous reaction mixture is generated (two-phase or three-phase), which optimally leads to a spatial separation of the product from the catalyst [10]. In this way, it is possible to link the benefits of heterogeneous catalysis (re-using of the catalyst and simple separation) with those of homo­geneous catalysis (high selectivity and activity) [11].

The potential uses for the new “green” procedure are varied and are not just limited to the pharmaceutical area. They can also be transferred to the production of fragrances, so the re-using of catalysts and the use of sustainable solvents offers a broad range of possible uses in the field of homogeneous chiral catalysis. A significant saving in production costs with a simultaneous process conversion according to the principles of “green” chemistry can be achieved in this way [12].