Biosensor-based interaction analyses are enjoying increasing popularity in both quality control and in research and development. Conventional biosensors, such as surface plasmon resonance systems, are based on alterations in the macroscopic properties of the measurement surface. However, switchable DNA layers, featuring switchSENSE® technology, facilitate the active movement of the tethered molecules. This kind of “active” biosensor not only offers information about measurement parameters such as binding affinity and kinetics, but also about biophysical parameters such as melting point, protein size, protein activity, etc. Erythropoietin (EPO) and anti-EPO antibodies are used here as examples to illustrate the potential of this technology both in buffer systems and in serum.

Today, biosensor-driven interaction analysis is part of the standard repertoire in the field of biopharmaceutical research and development. Quality control and diagnostics are other fields in which these systems are frequently employed. Particularly widespread are optical measurement methods, such as surface plasmon resonance (SPR) and biolayer interferometry (BLI), in which the binding of an analyte to a chip surface causes a measurable change in the refractive index. Unlike these “static” measurement methods, electrically-switchable DNA layers (electroswitchable biosurfaces, ESB) enable the active, controlled movement of capture molecules on the chip surface [1, 2]. The DNA molecules are bound to the chip surface at one end, thus acting as hinged “nanolevers”. Binding of the capture molecule to the distal end of the lever is achieved using common methods such as amine coupling, thiol coupling, His tag capture, etc. Due to the negative charge of DNA, the application of alternating current to the chip surface offers a controlled way of “switching” the DNA levers along with their bound capture molecules.

Fig. 1 The diagram illustrates the stand-up motion of DNA (A) and DNA with a bound protein (B). The corresponding time-correlated measurement signals (black: DNA; orange: DNA with protein) are shown in C. The „dynamic response“ is the area under the curve in question and a metric for switching speed.

Measuring the movement of nanolevers

The DNA molecules are marked with a fluorescent dye on one of the two strands. When a positive voltage is applied, the DNA is attracted to the gold surface and a quenching effect causes the fluorescence to decrease. This decrease can be measured with high sensitivity by using time-­correlated single photon counting; therefore, the speed of the switching movement can be determined precisely at any point in time. If the analyte then binds to the capture molecule, the hydrodynamic resistance of the lever, and thus its switching speed, will be changed in a predictable manner (see fig. 1). Looking at the time series of the switching speed allows for the affinity and kinetics of binding between the capture molecule and analyte to be determined. The additional dynamic component offered by this measurement principle allows for the simultaneous biophysical characterization of the capture molecule and the analyte (see fig. 2).

Fig. 2 Interaction analysis with switchSENSE®: From the switching speed (dynamic response) time series during the association and dissociation phase, it is possible to determine both the binding/unbinding rate and the affinity of the interaction.

A comparison with mathe­matically-­modeled reference curves enables the change in the switching speed profile to be used to determine the molecules’ hydrodynamic radius with a high level of accuracy [3]. Changes in the hydrodynamic radius are also caused by the formation of aggregates or conformational changes, and can thus be detected by the system in real time.

In the following example, the switchSENSE® method is used to investigate and characterize the hormone
EPO and corresponding monoclonal anti-EPO antibodies in buffer systems and serum. With the aid of a coupling kit, commercially available recombinant EPO is first covalently bound to single-stranded DNA in vitro using amine coupling. The DNA sequences used are comple­mentary to the single-stranded DNA covalently bound on the biochip surface. Functionalization of the chip with EPO as a capture molecule is therefore a straightforward process, taking only a few minutes. The change in switching speed due to the coupling can be used to measure the hydrodynamic radius of EPO. 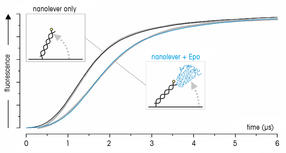 Fig. 3 EPO size analysis. Time-correlated stand-up curves of DNA and DNA with EPO (each in gray) with associated simulation curves (black or blue) not only show how DNA with EPO (blue) and „lags behind“ the pure DNA curve (black) but also illustrate how well the fit curves describe the measurement curves.

Figure 3 shows how the coupling of EPO slows the “stand-up motion”/upward motion of the DNA relative to unmodified double-stranded DNA on a reference electrode. This retardation curve can then be looked up in a library of corresponding reference curves in order to establish a hydrodynamic radius of 4.6 nm ± 0.1 nm. This agrees with the value of 4.7 nm calculated for the EPO molecule based on its crystal structure [4].

After functionalization, the chip is used to determine the binding affinity and kinetics of a monoclonal anti-EPO antibody (also commercially available). Antibody concentrations varying from 30 to 1,000 pM are then injected to obtain the corresponding binding curves. On account of the antibody’s strong affinity, unbinding
is measured over a long time frame of approximately 14 hours. An important/significant advantage of the DRX 2400 switchSENSE® system from Dynamic Biosensors is that it exhibits virtually zero detectable signal drift over very long measurement periods. A global fit results in a KD value of approximately 1 pM.

Fig. 4 Determining the concentration of EPO in an unknown sample by means of a standard curve. A shows linear fits in the initial region of the association at various concentrations. B plots the slope of the linear fit against the corresponding concentration. By measuring the slope, the EPO concentration is a straightforward calculation: concentration (pM) = slope x 1.4 · 106.

The association curves obtained at various concentrations of antibodies can then be used as standard curves, allowing for subsequent determination of concentrations in various samples (see figs. 4 A and B). Due to the very high measurement sensitivity, reliable detection is possible for concentrations below 1 pM. The next step in the analysis is to investigate the thermal stability of EPO. Another advantage demonstrated here is the temperature tolerance of the switchSENSE® technology. Unlike other surface biosensor systems whose operational temperature range is relatively narrow (for example, no more than 40  ̊C for SPR), the DRX 2400 measurement system supports reliable analysis within a temperature range of 4  ̊C to 85  ̊C. EPO begins to denature at about 50  ̊C causing swelling and a subsequent decrease in the switching speed. This phenomenon has been previously described in the literature [5]. From the decrease in switching speed, a melting point of 58.5  ̊C ± 0.5  ̊C is established for EPO. The switching speed can also be used to detect protein swelling or denaturation into its constituent amino acid sequences.

A link is provided by a subsequent experiment with the known anti-EPO antibody. Following temperature-­dependent unfolding, the EPO was once again able to regain its original structure and the EPO was once again recognized by the antibody. The same measurement apparatus is therefore able to determine not only the melting point but also whether biological activity has been affected by thermal stress. The detection of proteins in complex media, such as serum, is often critical for diagnostic applications. For measurements in serum, an assay has been developed, making the detection of anti-EPO antibodies possible with minimal sample pretreatment (filtration step and addition of competitive DNA).

Back to the beginning 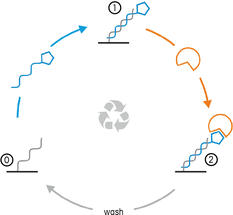 Fig. 5 Workflow for a switchSENSE® measurement. The process starts with single-stranded DNA on the sensor surface (0), which is then hybridized with a DNA capture molecule – in this case, EPO. The chip is now functionalized (1) and a range of separate measurement processes (size analysis, thermally-induced unfolding, interaction analysis, etc.) can now be started. Once measurements are complete (2), a basic solution is used to denature the DNA double helix. This removes the complementary DNA strand with proteins from the sensor. This restores the initial state, and a new measurement cycle can then commence.

Within a short period of time and without any specialized assay development, the chip can be regenerated for further measurements. In a simple pH step taking only several seconds, both of the DNA strands are dehybridized. Now reset to its initial state, the chip can be re-function­alized within minutes by means of repeat hybridization with EPO-modified counterstrands (fig. 5).This straightforward regeneration cycle can be repeated as many as several hundred times. An advantage of this regeneration is that fresh EPO that has not been manipulated or stressed is used for each measurement, therefore excluding the possibility of false/inaccurate measurement results.

In conclusion, switchSENSE® enables the label-free, real-time analysis of high-affinity interactions and their kinetics. KD values can be reliably determined in sub-nanomolar quantities and long-duration ­measurements are possible due to minimal signal drift. Unlike other biosensor systems, the analysis of switching dynamics permits the determination of the hydrodynamic radius and of conformational changes in the same measurement. Due to an available temperature range of 4 ˚C to 85 ˚C, the system is also well-suited to the thermodynamic characterization of molecules. The plethora of measurement parameters possible, such as protein size, melting point and interaction analysis, and the fact this is all offered by a single unit, yields a comprehensive picture of the analyzed sample.