Geoscientists, biologists and chemists at the University of Tübingen are working in collaboration with IFAM (Fraunhofer Institute for Manufacturing Technology and Advanced Materials in Bremen, Germany) to uncover the workings of insect surface adhesion. The goal of this project is the synthesis of an adhesive based on insect secretions. Particularly impressive is the strength of the adhesion achieved by some insects in relation to their bodyweight and the effortlessness with which the insects once again free themselves from the surface. The insects also leave no trace of their secretions on the surface itself.

Two types of adhesive system – one smooth, one hairy – are utilized by insects. One well-researched and familiar example is the hairy system used by the gecko, Gekkonidae. Thanks to a series of continuously finer hairs, which exhibit a characteristic surface structure, the gecko possesses the ability to move freely across vertical surfaces [1].

Smooth adhesive systems are much less well studied. These are based on the production of a two-phase secretion that purportedly exhibits adhesive properties, i.e. there are both polar and apolar components [2]. The abovementioned joint research project is working on collecting and analyzing these secretions to determine their molecular makeup (fig. 1). One sub-project is applying gas chromatography to the analysis of ­hydrocarbons in adhesive secretions.

Why are we analyzing these hydrocarbons?

In insects, long-chain alkanes have an important role to play: they serve as sexual pheromones and kairomones (to identify insect sex and genus) while protecting the insect cuticle from drying-out. Since these hydrocarbons influence the viscosity of secretions, it is reasonable to assume that they may also play a specific role in adhesion. As a rule, viscosity increases in proportion to alkane chain length, whereby tarsal secretions become more viscous and can thus positively influence both the adhesive properties and surface wettability.

One of the insects under investigation is the Madagascar hissing cockroach (Gromphadorrhina portentosa). The insect is especially suitable as a research subject since it is comparatively large for an insect (approx. 6 – 8 cm) and very robust (fig. 2). In order to unambiguously assign substances to the secretion released from the feet (tarsi) and not the insect cuticle (body shell), reference samples were taken from the insects’ lower legs (tibia), where no adhesive organs are present.

Fig. 2 Madagascar hissing cockroach, compared to a 2-euro coin and a human hand

The biggest challenge posed by insect secretion analysis is the sampling process itself. The meager quantity of secretions necessitates a sampling technique that avoids dilution while also implementing an enrichment step. It is also important that the sampling technique is largely immune to the introduction of contamination. Several methods are known for taking samples from insects [3]. One standard technique involves killing the insect with liquid nitrogen, followed by the use of organic solvents (heptane, chloroform, etc.) to extract the cuticular compounds. Another technique involves enclosing the insects whole in capillary tubes and then introducing these directly into the GC injector, where the analyte is thermally desorbed from the cuticular surface for subsequent analysis. These sampling techniques are unsuitable for the present research work, however, since no locally-controlled sampling at the tarsal regions – which release the adhesive secretion – takes place: instead, the molecular profiles of the tarsal secretion and general cuticular fingerprints are intermingled. For this reason, other sampling techniques were developed that permit a targeted, controlled sampling of the adhesive tarsal secretions (fig. 3). These methods were compared using the Madagascar hissing cockroach.

The abovementioned extraction method using organic solvents was specifically modified in order to enable the targeted harvesting of tarsal secretions. As a first step, insects are fixed on a glass plate using adhesive tape and wire. Heptane is then drawn up into a Hamilton syringe and a droplet is placed on the sampling site before then being drawn up again into the syringe. This step is repeated several times and the extract is then collected in a glass vial. This type of sampling is very time-consuming: six people working with twelve insects over 24 hours gathered secretions ultimately providing 200 µL of extract in heptane. Due to the protracted harvesting process, this method is also susceptible to contamination, both from the environment and from other insect body parts.

One comparably advantageous alternative is contact solid-phase microextraction using commercially-available SPME fibers. In our case, a polydimethylsiloxane (PDMS) SPME fiber was utilized, which is particularly suited for use in the extraction of apolar substances. This fiber can be used with contact methods, i.e. brief rubbing directly at the chosen site, for targeted collection of the adhesive secretion. In our case, a stroking action was used for about 7 min. at the chosen site and the fiber was then inserted directly into the gas chromatograph injector, so as to desorb the extracted substance and separate out the complex samples using GC. A quadrupole mass spectrometer (MS) was used for detection. The advantage of this in vivo sampling method is that the cockroach does not need to be fixed in place: anesthesia with CO2 is sufficient to keep the insect still for the approx. 7 mins. of contact SPME sampling.

Commercial SPME fibers are expensive and the coating is very easily destroyed by the contact SPME process. Fibers also break regularly – particularly if the insect wakes up prematurely from the anesthesia and destroys the fibers mechanically by vigorously thrashing about. We were able to demonstrate that the coated SPME fiber can be replaced by a simple glass fiber, manufactured from a precolumn intended for use in gas chromatography. The fiber is cheap, easily made and more rugged than the SPME fiber. The sampling method is also very similar to the SPME fiber process: secretions are also collected for 7 min. and then immediately analyzed. Although the glass fiber is itself a polar surface, the substance profiles extracted show no differences to those that were collected with the apolar-coated PDMS SPME fiber, nor are they any different to those that were obtained using heptane extraction.

Fig. 4 Chromatogram of the adhesive secretion obtained by sampling with the glass fiber SPME; alkanes are labeled

The identification of the compounds detected was achieved both by using their Kovats retention index and
a database lookup, as well as via mass spectra plus characteristic fragmentation and a NIST database search: n-alkanes, methyl-branched alkanes and a dimethyl-branched alkane in the range C27 to C33 were identified both in the secretion and on the insect cuticle. Figure 4 shows a chromatogram after 7 min. of collection with the glass fiber at the tarsi (cockroach feet); the highest-intensity peaks are labeled with the corresponding substances. The highest intensities and thus the greatest proportion of alkanes can be ascribed to the alkanes C29 (nonacosane) and 3-Me-C29 (3-methyl-nonacosane). It is in fact possible to detect whole series of methyl-branched hydrocarbon isomers with a huge variety of chain lengths. The complexity of the tarsal secretion’s molecular alkane profile is well illustrated by figure 4. 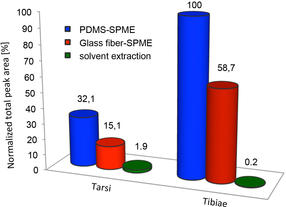 Fig. 5 Alkane yield in percent for the sampling methods, both for tarsi and for tibiae

Comparison of the various sampling methods

In trace analysis, as mentioned above, the sampling work step is decisive not only for obtaining reproducible, high-quality measurement results but also for the desired sensitivity of the analysis method. Adequate extraction can increase yield, thus increasing the sensitivity of the method, thereby actually making it possible for the method to detect substances present only at very low concentrations. In this respect, SPME extraction methods offer considerable advantages over solvent-based extraction. Figure 5 shows the total quantity of alkanes found for each of the sampling operations, normalized to the method with the greatest yield. Here, one should note that the PDMS SPME fiber technique at the tibia collected the greatest quantity, whereas the glass fiber used at the same site was able to collect only about 60 % of alkanes. Fewer alkanes were found at the tarsi, where adhesive secretions are present. That said, the intensity when using the glass fiber was sufficient to identify all of the alkanes. With solvent extraction, the quantity of secretion collected in comparison to the other methods is very low, since in this process the secretion is diluted with heptane during extraction. As a result, the solvent extraction method returns chromatograms with low peak intensities, leading to the loss of compounds featuring low abundance, since these then fall below the detection limit. In comparison, the method using SPME sampling is more suitable: here, the coated PDMS SPME fiber offers advantages in terms of sensitivity while the uncoated glass fiber offers advantages in terms of precision and practical handling, as well as in terms of costs [4]. 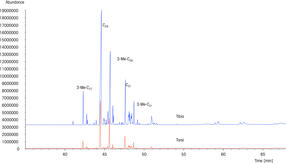 Fig. 6 Comparison of chromatograms from tarsi (feet) and tibia (lower leg, reference). We can see that a significantly larger number of hydrocarbons can be collected at the leg.

Will we soon be using synthetic insect adhesives to climb walls like Spiderman?

To determine the influence on adhesion, the molecular profile of the tarsal secretion was compared to the insect cuticle of the Madagascar hissing cockroach. This comparison reveals that these two molecular fingerprints, while qualitatively very similar, exhibit significant quantitative differences (see fig. 6).

The n-alkanes and methyl-branched alkanes found combined with the absence of unsaturated alkanes and aldehydes indicate that the secretion is likely to be semi-solid and lipid-like. These properties would favor adhesion by providing resistance to slippage and drying out while protecting against abrasion.

In conclusion, we can state that these findings seem to indicate that the hydrocarbons, while not being solely responsible for the adhesive performance achieved, are very likely to play a significant role in contributing to adhesion – and especially by their influence on the consistency and wettability of hydrophobic surfaces. Our interest is therefore increasingly turning to focus on substances such as sugars and proteins. While research is also being conducted in this area, quite a few Madagascar hissing cockroaches will have run up and down smooth walls without us really knowing how they do it before we can develop an adhesive truly able to claim that it is a perfectly biomimetic glue based on such insects’ secretions.