Not least thanks to bioanalysis! 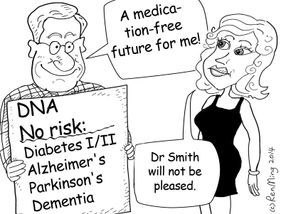 I turned 63 recently.
My secret to staying optimistic as you age towards your inevitable death?

“The idea is to die young, but as late as humanly possible…”

From a historical perspective, life expectancy in Europe has progressed from a meagre 20 years for the Neanderthals to 40 in Victorian times and 70 by the middle of the 20th century before reaching today’s figure of 83 years for women and 78 for men. The rising trend has been nearly linear for four generations and shows no sign of levelling off in the future.

So what is biotechnology – and analytical biotech in particular – capable of even today, to ensure we stay
“fit and healthy” as we grow older? In earlier times, increased life expectancy was influenced by factors such as drastic reductions in infant mortality and death in childbirth, improved hygiene and disinfection, proper nutrition, vaccinations and antibio­tics. The last two are the fruits of the first biotechnological revolution: they eradicated smallpox and measles was to follow. A world without human infectious diseases would surely offer a longer life to everyone. The same would logically be true of a world free of war. Yet even today, a child still dies of malaria every minute, and armed conflict in the world’s flashpoints lamentably produces victims on a daily basis.

Previously, improvements in life expectancy were almost always achieved before adulthood. Aside from antibiotics, there were very few life-prolonging strategies for use in adult life. Biotech optimists, such as my friend Jim Larrick in California, would say: “Lifestyle changes, the right diet and tailor-made pharmaceuticals put a lifespan of 120 years in perfect health within anyone’s reach!”

So which new biotech products can help us to that magic 120 – now and in the future? Recombinant antibodies, stem cells, biopharmaceuticals and bioanalytical techniques. In my specialist field of bioanalysis, glucose and DNA tests are vital, as is rapid immune testing. I can give you an example of this by telling a personal story. Between 1975 and 1981, I worked in the research team headed by Prof. Frieder Scheller at the Central Institute for Molecular Biology (ZIM, Berlin/Buch). Despite limited funding from the DDR, Scheller nonetheless developed a world-leading biosensor for glucose capable of being used up to 10,000 times. Far ahead of his time…

With early diagnosis by means of biosensors, appropriate changes to lifestyle and the potential administration of genetically engineered human insulin, the life-shortening effects of diabetes mellitus can now be avoided. A month ago, my glucose levels (measured on an empty stomach) were slightly elevated – my response is to change my nutrition and finally get around to participating in more sporting activities. Prolonging life with bioanalysis!

A second example: In 2000, we developed the fastest heart failure test in the world at HKUST in Hong Kong (see Renneberg&Glatz, 2013, labor&more 1).

Then, in 2008, this “in-house” FABP rapid immune test dramatically saved my life by immediately indicating
a pending heart attack. After surviving this mini-heart attack I was given warfarin (Marcumar) for long-term blood dilution. So far, so good…

Case 3: In 2010, I sent my DNA for testing by the company “23andMe” in the USA. One highly interesting result was the fact that I have a fivefold copy of genes for nicotine dependency. My father smoked 40 cigarettes a day! The consequences for me? No more than the occasional puff on a cigarillo… And my heart attack risk could also be seen in my DNA, by the way. But where the DNA diagnosis really “struck gold” was my oversensitivity for a specific drug. Guess which? Warfarin. In 2009, I fell into a coma in China after a massive cerebral haemorrhage – caused by warfarin! That time, doctors in Shanghai managed to save my life. A realisation that came too late: I should NEVER have been given warfarin. That’s just a taste of how DNA analysis can help clinical practice today. But is it really what the pharma industry wants?

Today, I lead a cheerful and increasingly healthy life after all these experiences, and it’s not surprising that I think bioanalysis is a wonderful and important science.Any one of us could probably celebrate his or her 100th birthday. We should also consider how this chance can be taken with a properly attentive mind-set.

More about Hong Kong University of Science and Technology