The in vivo-metabolism of flavonoids: a challenge for analytics and pharmacology

There is barely a class of compounds among the secondary metabolites of plants that is so prominently represented in our lives as that of the flavonoids. They are found in ­numerous food substances in various oxidation states, and principally as glycosides (Fig. 1). By consuming fruit, vegetables and grains, we take in significant quantities of these compounds, which are characterised by phenolic structural elements, every day. They can also be found in numerous luxury foodstuffs of plant origin, such as wine, beer, tea and chocolate for example (Tab. 1). Furthermore, as active substances in a multitude of ­medicinal plants (e.g. gingko leaves, hawthorn leaves or milk thistle fruits), they contribute significantly to the therapeutic effects of herbal medicinal products.

Even though numerous different pharmacological effects of flavonoids have been described, both in vitro and in vivo, the main interest in these compounds centres essentially around their anti-oxidative activity and the ability to function as a radical scavenger. Without going into detail about the mechanical principles and structural prerequisites for both effects, a basic differentiation must be made between a direct radical scavenger and an activation of the cellular defence mechanisms (e.g. through transcription factor Nrf-2) with the resulting inactivation of the radicals. Ultimately, in both cases, this leads to a reduction in the oxidative stress for the cells, so that flavonoids can be assumed to have cyto-protective, chemo-preventive and anti-inflammatory effects. As regularly ingested components of food, these compounds can, therefore, contribute significantly to healthy nutrition and have also been discovered to be interesting substances for many functional food industry products. 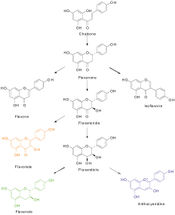 Fig. 1 The most important sub-classes of the flavonoids. Essential structural variations are based on the biosynthetic insertion of additional hydroxyl-groups and the conjugation of the OH groups with one or more sugars. Glycosides of flavonols and anthocyanidins (= anthocyans) and the oligomers of flavanols are often dominant in fruit and vegetables

Flavonoids in the Body

What happens with the flavonoids ingested with food, and in what form are they really found in the body? Due to the multitude of known flavonoid compounds (> 5000), we would like to concentrate on the dominant flavonol glycosides in food, the quercetin type, when answering this question. Direct resorption via active transport processes has only been described in the literature for individual compounds (interestingly dependent on the type and position of the sugar). The general metabolism basically follows two different paths (Fig. 2.). The first step is common for both, which involves the enzymati­cally catalysed splitting off of the sugar, resulting in the formation of the aglycone (here quercetin). This is followed either by the resorption of the intact aglycone and the immediate formation of Phase I/Phase II metabolites, or by the splitting of the aglycone at the C-ring by intestinal bacteria. This results in the formation of numerous low molecular weight aromatic compounds with varying lengths of side chains (C0, C1, C2 or C3), which are in part resorbed and metabolised, but also in part directly excreted with the faeces. Which of these two paths, which run in parallel and overlap each other, is predominant, is thought to depend of the type of flavonoid, the dose of the intake, the other available secondary metabolites, and nutrition. The following only considers some of the analytical and pharmacological aspects of intact flavonoids, because these are processed differently from the low molecular weight compounds. 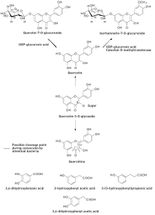 Fig. 2 Metabolism of flavonoids using the example of flavonol glycosides of the quercetin type. After the splitting of the glycoside, either Phase I/Phase II reactions to aglycone (upper part) occur, or a splitting to low molecular weight compounds (lower part). Only a selection is shown, basically because the other hydroxyl groups are also available for glucuronidation (sulphation or mixed glucuronidation/sulphation are not shown).

The identification and quantification of flavonoid metabolites is not easy, among other things due to the lack of available Phase II metabolites as reference substances (Fig. 3). The quantification method predominantly used for the determination of the intact resorbed flavonoids, therefore, involves the collective splitting of all Phase II metabolites, e.g. by the addition of glucuronidases and sulphatases to the serum or tissue samples. This splitting is then followed by extraction and determination of the resulting aglycones, usually by HPLC-UV-DAD. The identification (particularly using a mass selective detector) and quantification of the compounds can be performed easily because the majority is available as reference substances, and the structural diversity of the flavonoid aglycones is limited; they generally possess a similar UV-spectrum in the context of a Phase I reaction, despite the insertion of hydroxyl or methoxy groups. Here, the pitfalls of an exact quantification are often seen in the optimisation of the recovery for the extraction stage, in particular during the optimisation of the hydrolysis reaction and during the variation of the extraction agent. With this method, the substance-specific quantification and identification of the compounds is lost. In order to realise this, the hydrolysis step must be removed. In doing this, the preparation of the sample becomes significantly more difficult, as the diversity of the substances to be extracted is larger. Further, the substances can be present in equilibrium with the dissociated forms, depending on the pH value due to the acidity of the conjugates (glucuonic acids, sulphate). Furthermore, the polarity spectrum (presence of mono- and diglucuronides and mixed glucuronides and sulphates) is substantially greater. 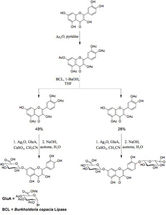 HPLC (or UPLC) coupled mass spectrometry is considered the method of choice for the identification of the compounds. It provides a presumably high level of performance, in particular when coupled to HR-ESI-MS/MS. Since in the Phase II metabolites, however, part of the structural diversity is due to the occurrence of various position isomers of the glucuronides, the synthesis of the expected or postulated compounds is nevertheless recommended, as is comparison with the authentic compounds. This is particularly appropriate if a ­subsequent quantification of these compounds is to be performed. In recent years, numerous recommendations have been made regarding the synthesis of flavonoid glucuronides and sulphates with selective protection/deprotection of individual OH groups. Additionally, there are also biotechnological processes available. However, gaining sufficient quantities of the substance with these is often problematic. 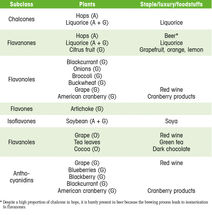 Tab. 1 Occurrence of flavonoids in plants (small selection) and the staple and luxury foodstuffs made from them (A = Aglycones, G = Glycosides, O = Oligomers).

As the original compounds of the flavonoid glycosides cannot be found in serum and other tissues in practice, or only in very low concentrations, the question of which compounds should be particularly extensively pharma­cologically characterised arises. Here, there is still far too little information about the in vitro and in vivo pharmacological activity of the Phase II metabolites, which is also based on the absence of available compounds. But the pharmacological testing of aglycones also appears to be significant. In the past, this was often criticised as unnecessary, as flavonoids are predominantly present as glycosides (Tab. 1) and aglycones in the serum are not detectable, or only in trace amounts. However, more recent works show that cells are able to split the ­glucuronides using so-called “in situ” enzymatic possibilities, so that aglycones are formed again. How relevant this aspect really is in vivo is very difficult to estimate at this stage.

The analytical and pharmacological characterisation of flavonoids, therefore, essentially concentrates on the formed Phase II metabolites and low molecular weight compounds, while the search for starting compounds in the serum, liver, gall and other tissues seems (with exceptions) to be less promising.

Literature:
Literature available from the author.