Where theory and practice come together

Continuous manufacturing in the pharmaceutical industry

The question should not be why is the pharmaceutical industry beginning to engage in continuous manufacturing (CM), but rather “what took so long?” Essentially every other industry has been producing materials continuously for decades. Henry Ford began using the assembly line on December 1st, 1913, so why not drug products? Well, drugs aren’t cars, they are made of chemicals. So are detergents and they have been made continuously since the 1970’s.

A detergent, being continuously manufactured, enlists a series of rail cars on parallel sidings: some with a fatty alcohol, some with chlorosulfonic acid, others with caustic, and a fourth line of empty cars. The fatty alcohol is pumped into a long coil, the acid is added reacted, neutralized, and pumped into the empty rail cars and shipped to distributors.

Why is pharma different?

Pharmaceutical products have different challenges from consumer products. A “bad” consumer product is easily seen by the purchaser or distributor: spoiled milk will not be drunk; a bad tire will be seen as flat. A detergent that doesn’t clean or cake mix that won’t rise will not kill a person, but a pharmaceutical product, designed for acute or serious chronic diseases, will only show a flaw when it fails the patient. Therefore, the Agencies (EMA, FDA) are quick to punish faulty analyses that allow faulty product to be distributed. A patient cannot look at a tablet and realize that it is sub- or super-potent.

The industry was strongly regulated after the first Pure Food and Drug Act (1906) was passed. A series of other acts followed; almost making it seem as if there was no freedom for innovation of discovery, clinical trials, and most importantly, in production. Since the early industry was almost a “cottage industry,” the regulations didn’t slow the business very much. As the industry began to bring faster, larger production equipment to play, the FDA published Good Manufacturing Practices. The rules codified (some say ossified) the industry and the manner in which it designs, produces, and analyzes the products which it sells. Then, it was a good idea. It forced manufacturers to record and document everything from start to finish in a drug’s lifetime. The manner a product was manufactured was specified in the Standard Operating Procedures (SOPs) or Master Manufacturing Formula (MMF). These outlined every step that was to be taken and, considering the alternatives, it was a good idea. Times change. Blacksmiths and stagecoaches were a good idea in the 1800’s and GMP’s were good for the 1940’s, 50’s, 60’s, and even 70’s. At that point, something happened: blockbuster drugs! We began producing many millions of dosage forms at multiple locations, using multiple operators, punches, tablet presses, and critically, numerous points of origin of APIs and excipients. Nonetheless, we were still submitting NDA’s and ANDA’s based on (a minimum of) three production lots, usually from one location.

Keeping the parameters of a production process “completely unchanged” whilst the raw materials continuously vary physical characteristics has had several consequences:

The first is caused by attempting a “one size fits all” approach to tablet or capsule (or syringe or vial) production, where the operating parameters are fixed, while the ingredients vary in properties. Despite this being known in the industry (where experienced operators made ‘minor adjustments’ in violation of GMP), nothing was done for decades. The first glimmer of light was the US FDA’s PAT (Process Analytical Technologies) Guidance (draft in 2002, final in 2004).

The industry was encouraged to place monitors at every step of the process and, based on DATA, the individual pieces of equipment could be controlled and parameters changed, in real time, to affect pre-determined end products. The changes were based on the “best scientific judgement” of the scientists, engineers, and operators. Quality Assurance personnel were aghast as words like “scientific judgement,” “change,” and “variables” were not in their lexicon.

Expanding PAT to its logical conclusion(s)

Despite excellent monitoring equipment being developed, PAT was mostly accepted by (mainly) larger proprietary and generic houses. When the ICH (International Conference on Harmonisation) issued Guidances on Risk Management, QbD, and such (Q8, 9, 10, 11), impetus was given to move from GMP to PAT to QbD (Quality by Design) and release the product in “real time.” Real-time release (RTR) simply means that, every step has been held within pre-designed (and verified) limits before moving to the next step, and so forth, the final result, by definition, must be within specification. Therefore, no “final” or after the process analyses are needed. 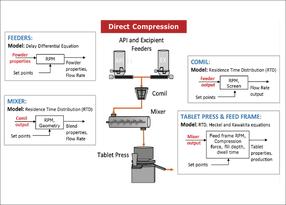 Fig. 1 A direct compression set-up. In this schematic, the controllers and set points are shown.

All the Critical Product Parameters (CPP) are met: assay, content uniformity, even the dissolution profile. All that remained was to connect the systems: weighing, granulating or ribbon compacting, lubricating, tableting, and coating. With monitors/controls at each step, the process could be continuous, meaning no off-line testing. The powders (API and excipients) are loaded into hoppers and finished product is issued from the end of the line, virtually 100% analyzed. Figures 1 and 2 show the schematics of two different CM lines. 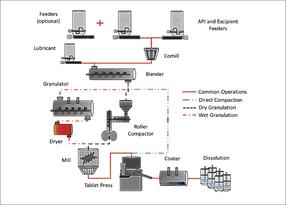 Fig. 2 A CM unit with both a roller compactor and Granulator. The set-up allows either to be used, depending on which is required.

The pieces of the puzzle

To show a successful CM project, I went to the Rutgers University Engineering Center for Structured Organic Particulate Systems (C-SOPS center), to see their CM program (a Rutgers/Janssen (Johnson & Johnson) Collaboration). Their objective is to learn how material properties, formulation composition, and process parameters are used to predict the properties of all intermediate blends and finished products, utilizing the INSPIRE (RU-CM) line. The project was allocated $US1.2 million for 2015 – 2017 (J&J) with another $US1.0 million from an on-going US FDA project. 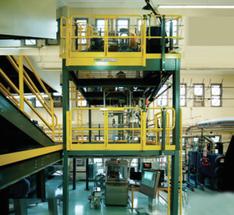 Figure 3 shows the CM unit: at top is the weighing platform. The powders (APIs and excipients) are dispensed by weight, making use of their physical parameters (i.e.., density, flowability, particle size distribution) for proper dispensing, since tableting and encapsulating machines operate on volumes, not weights.

Just below the dispenser is the Archimedes-screw type mixer on the second tier. The powders are continuously mixed (screw-action) and the mix emerges at the end. This unit may be exchanged or upgraded but, revalidation is not necessary. It is with NIR or Raman sensors, and, if it does not meet pre-determined specifications, the process either stops or is modified (screw speed, ingredient add speed). At the floor of the unit are the tableting and coating pans (continuous, of course). 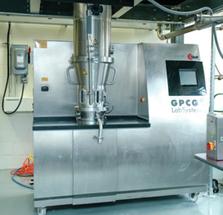 Figure 4 shows a continuous stream granulator. This is one of several brands available and, as with the other units in the CM train, the granulator may be upgraded or replaced with impunity, since a proper design space will allow operators or formulators to adjust to any mechanical differences… without the need to revalidate.

An alternative to “wet” granulation is seen in Figure 5. This ribbon compactor “squeezes” the mixed powder into a continuous, semi-elastic ribbon. If performed properly on a well-blended mixture, the resultant ribbon, when chopped to granules, gives an equivalent to the granulation product. It is then lubricated (with e.g., magnesium stearate) and transferred to the tableting or encapsulating machine.

Several obstacles exist for any company stepping into the 21st century and producing product via continuous manufacturing (or “automated QbD”): 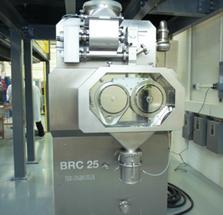 It becomes apparent that, even if we only eliminate recalls and OOS investigations, there is sufficient financial reward for performing CM. When one considers all the other cost/quality benefits, they more than outweigh the initial costs and effort.

Reducing the Costs of Compliance

Verifying weighing equipment is a time-consuming and costly task. There are many common misconceptions about how and how often balances should be test (…)