As far back in time as several thousand years ago our ancestors were using biotechnical processes to make beer, wine and bread. These days, biotechnological processes are not merely used to produce food – they enable a wide variety of applications, from wastewater treatment to manufacturing medicines. Due to the complex composition of the process media, typically multi-phase systems, and the need for ever greater productivity, the measurement and automation technology used in bioprocesses plays a key role.

Operating a bioreactor to produce a product usually takes place in three phases: the upstream process (filling, sterilizing, mixing), the cultivation process (breeding and production) or biotransformation and the downstream process (harvesting and processing). To achieve the highest possible product quality, a significant degree of automation is needed in each of these phases [1]. Due to the dynamics involved in the cultivation process, it is this phase that places the highest demands on the measurement and automation technology used.

Taking measurements during the biotechnical process

To obtain crucial information on how a process is progressing, a variety of analytical measurement methods have been developed [2]. Basically, there are offline and online methods. Offline measurement usually involves manual sampling and further processing, so there is no direct contact between the reactor and the measurement system. The time it takes from sampling to obtaining the measurement value can take several hours (e.g. when directly determining dry biomass). Depending on the biotechnical process, this time span is usually too long to allow influencing the course of the process by reacting to the measured values. To be able to intervene, online measurements must be performed. For this, in situ and ex situ sensors are used. In situ sensors directly contact the culture broth in the reactor. Thus, temperature, pH and the concentration of dissolved oxygen are often measured in situ. An ex situ sensor is used when a sample is removed from the reactor and fed to a sensor via hoses or piping. This method is often used in combination with a sampling module to provide a cell-free stream of sample for flow injection analysis systems.

Nature as a model for sensors

When developing sensors for process analysis, we often imitate nature. After all, nature has evolved sensors with the sensitivity to detect at 1,000 molecules per milliliter. In principle, a sensor consists of a receptor, with which the variable is directly picked up as a raw measurement value, and a transducer that converts the raw value into a biological, chemical or physical process variable to be made available as an electrical signal for further use. Depending on the measurement principle by which the receptor picks up the raw values, there are chemical, biological and optical sensors. Important and characteristic features of sensors are response time, dynamic range, reversibility, selectivity, sensitivity as well as accuracy, which manifests itself in precision (multiple measurement spread) and closeness to the true value. What can also favor the use of one sensor over another are the operating conditions or the calibration procedure.

So-called soft sensors (sometimes referred to as software sensors) [3] mostly use non-selective measurement signals and combine them with methods such as principal component analysis and partial least square analysis. Neural networks are also used in such data-driven models when there is a nonlinear relationship between spectra and process variables. In addition to soft sensors that are based on data driven models, there is another group of soft sensors that combine process knowledge in the form of a dynamic model with measured values ​​to determine process variables that are not directly measurable. They are also referred to as observers and typically use state space differential equations to describe transportation processes and important reactions of the biotechnical process.

Simple optical sensors are based on turbidimetry, i.e. on light absorption or on nephelometry (light scattering). Both methods can be used to detect solid components, such as microorganisms, contained in liquids. However, a linear relationship usually exists only at low biomass concentrations. For such measurements, sensors are available that measure the intensity of a transmitted light beam or that of laterally scattered light. 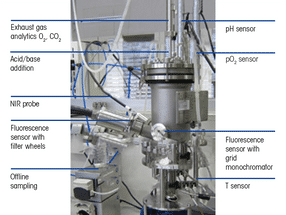 Many optical sensors are based on spectroscopic methods. In recent years, fluorescence, UV/VIS, Raman and NIR spectrometers have become very important process analyzers in biotechnology (e.g. [4]). This is due to their nondestructive measurement method without the need to add reagents, the short delay times, the simultaneous acquisition of multiple process variables, the safe use without the risk of contamination and the rapid development of innovative high-performance optical components. Photodiode technology has developed dramatically in recent years, as have new point sensors, line sensors and area sensors, demonstrated by the lower costs of the process analyzers. Such sensors are available for spectral ranges from UV to near IR. Recent developments in communication and information technology have also contributed to the increased use of such technology. For example, systems are now available that can transmit 900 spectra per second from the spectrometer to a computer. These spectroscopic methods do not measure bioprocess parameters directly due to lack of selectivity. Instead, the obtained measurement signals are used as input variables for the soft sensors, from which essential process variables are calculated using a chemometric model. 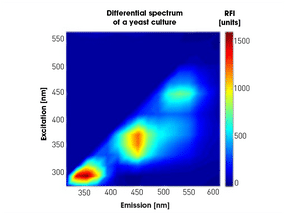 The combination of data-driven models and measurement signals from fluorescence spectroscopy has gained in importance the most. This is due in particular to the higher sensitivity of this measurement method, as a consequence of measuring pure emission intensities (without background intensity) and because, unlike other methods, it does not consider the ratio of issued intensity to measurement intensity. Fluorescence spectroscopy enables the simultaneous determination of biomass, the substrate and the product, e.g. during yeast cultivation [5]. NIR spectroscopy lets a variety of organic compounds be detected. This spectroscopic method is based on the interaction of electromagnetic waves with covalent molecular bonds (e.g. O-H, N-H and C-H bonds), analyzing changes in vibrational state. It has been used for determining biomass, glucose, lactate, acetate, glutamine and cellulase in a range of cultivations.

A further optical method is in situ microscopy, with which it is possible to look inside a bioreactor to, for example, investigate the number of cells, their sizes as well as cell morphology. Chemical and biological sensors can also use optical components. For example, an indicator can be immobilized on the tip of an optode whose optical properties change when the concentration of an analyte changes. Via glass fibers, light is sent to the indicator and back. This allows any change of the optical indicator properties, such as fluorescence ability, to be detected. Based on this method, sensors for dissolved oxygen have been developed that react very sensitively, in particular at low concentrations. Similar pH and pCO2 sensors have also become available. In combination with a biological component, such as an enzyme, the optode can be used as a biosensor as well. Biosensors are also available in combination with other receptors. Conductometric, amperometric and potentiometric receptors have become established and have found their way into process analysis in addition to thermistors, piezocrystals and field-effect transistors. Because most biosensors are not sterilizable, they are used ex situ in combination with flow injection analysis systems. Currently, single-use sensors are very popular and are likely to become even more widespread, in particular because of the growing number of single-use bioreactors [6].

Although a variety of different process analyzers have been developed, only a few of these systems have found their way into industrial applications. One of the reasons is that transferability from one process to another is not always given. The cost of operation and maintenance is often too high and the required reliability and robustness for typical industrial environments cannot be guaranteed. At the same time, there is a need for new analyzers. For example, there are no process analyzers available for key parameters of the metabolome, proteome or transcriptome. A lot of research and development must still be done in bioprocess monitoring.

With gravimetric feed control using a balance, you can be sure of efficient, accurate, and reliable process control (…)