DNA and RNA aptamers are high-affinity, nucleotide-based binding molecules which, as an alternative to antibodies, are already being widely used in analytics, diagnostics and therapeutics. The generation of new aptamers and their industrial implementation opens up new potentials for a wide range of application areas. 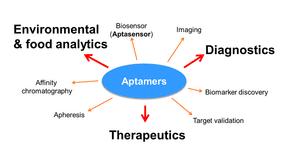 Fig. 1 Application areas of aptamers: The target molecules of aptamers cover a very broad spectrum. They are therefore suitable for very diverse uses in a huge variety of environmental and food analyses as well as in medicine for diagnostic and therapeutic purposes.

Aptamers (derived from Latin “aptus”, fitting) are functional nucleic acid molecules which, similar to antibodies, possess the ability to bind to specific target molecules with high affinity and specificity. These short, single-stranded DNA or RNA oligonucleotides, about 15 to 100 nucleotides long, fit exactly into complementary sites on the target molecule according to the so-called “lock and key model” by virtue of their complex three-dimensional structure based on electrostatic interactions, hydrogen bonding and base stacking. From a very diverse spectrum of target molecules, aptamers have already been successfully developed against ions, small molecules, peptides, proteins as well as against whole viruses, bacteria and cells [1]. This shows they are suitable for a wide variety of applications in environmental and food analysis, as well as in medical diagnostics and therapy (Fig. 1).

The most widespread method of generating aptamers is the SELEX (systematic evolution of ligands by exponential enrichment) process [2, 3], a directed in vitro selection procedure. 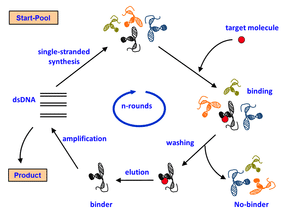 Fig. 2 Schematic sequence of the SELEX process: In this targeted in vitro selection process, a nucleic acid library (start pool) is incubated with a target molecule. The target binding sequences are separated from the non-binding ones. The former are isolated, amplified and used as an enriched pool of single-stranded nucleic acid in a further in vitro selection cycle. This iterative process usually consists of 10 to 20 selection cycles.

The aptamers are isolated from a random sequence library. It consists of a randomized, 15 to 100 nucleotides (N) long sequence composed of the four possible nucleotides A, T, G and C, resulting in a theoretical diversity of N4. Each such sequence is enclosed by two conserved regions (primer sequences). The SELEX selection process typically commences with starting libraries of at least 1014 different sequences. A target molecule is incubated with one such nucleic acid library, upon which the target binding sequences are separated from the non-binding ones by, for example, intensive washing. The target binding sequences are isolated, amplified and used as an enriched, single-stranded nucleic acid pool for another in vitro selection cycle. This iterative procedure usually goes through 10 to 20 selection cycles (Fig. 2). The structure and thus the fitting accuracy of the aptamer not only depends on its nucleic acid sequence but also on environmental factors, such as the temperature, the pH value and the ion concentration of the solvent used. These factors can be varied during the SELEX selection process in optimization for the later application.

Automating and managing the selection process

In the past, very diverse method modifications for the use of specific target molecules and for the automation of the SELEX process have been developed and evaluated, such as affinity chromatography and capillary electrophoresis SELEX, as well as cell, capture and tissue SELEX. 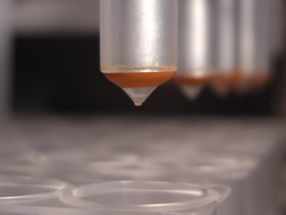 Fig. 3 Magnet robot BioSprint 15 from Qiagen: Immobilization of a binding partner in the SELEX process (target molecule or nucleic acid library) to a solid phase in the form of magnetic particles enables it to be automatically transferred between different reaction vessels using magnetic rods. This method enables a significantly accelerated, simultaneous in vitro selection of up to 15 target molecules.

Fraunhofer IZI-BB prefers a semi-automated process into which a managing process is additionally integrated. By coupling one of the binding partners (target molecule or nucleic acid library) to magnetic particles via special linker molecules, the automated separation of target molecule binders can be achieved using a magnet robot (Fig. 3). This method makes it possible to significantly accelerate the in vitro process and, simultaneously, select of up to 15 target molecules in parallel [4]. In addition, the enrichment of target molecule binders is controlled via polymerase chain reaction (PCR) and fluorescence dye-linked aptamer assay (FLAA, [5]), whereas the diversity of enriched nucleic acid pools is checked via diversity assay (DANA - diversity assay for nucleic acids). Monitoring the selection process allows to directly control and optimize the process by changing various process parameters. The selection stringency is increased from cycle to cycle, e.g. by intensifying washing, to enrich the target binding agents and reduce the diversity in the enriched nucleic acid pools. This procedure makes the SELEX process even more efficient, faster and cheaper, and improves its success rate. 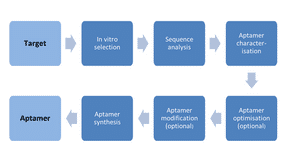 Fig. 4 Aptamer development workflow: Starting with a target molecule, the aptamers are first identified by in vitro selection and sequence analysis and then characterized in independent binding studies regarding their affinity and specificity to the target molecule. Subsequently, there is an opportunity to optimize and modify the aptamers so that they can be used for different application areas. The synthesis of aptamers is carried out easily, inexpensively and with high reproducibility using chemical synthesizers.

Aptamer development goes through various phases (Fig. 4). The different sequences of the resulting enriched target-binding nucleic acid pools are first identified by sequence analysis using NGS (next-generation sequencing) technology and then analyzed using bioinformatics tools. Subsequently, selected sequences are characterized in independent experimental binding studies with respect to their affinity and specificity to the target molecule. In addition to the fluorescence dye-linked aptamer assay (FLAA) already mentioned, a variety of other methods such as surface plasmon resonance (SPR), microscale thermophoresis (MST), electrophoretic mobility shift assays (EMSA) or flow cytometry (fluorescence-activated cell sorting, FACS) are used. Additional optimizations of identified DNA or RNA aptamers may be achieved by sequence truncations and/or sequence modifications. Chemical modifications can be carried out for both stabilization and functionalization purposes. For example, it is possible to introduce enzymes and fluorescent labels for detection, or functional groups for surface immobilization. Such modifications allow the aptamers to be used for a diverse range of applications.

The dissociation constants of aptamers can lie in the nanomolar to picomolar concentration range. They therefore find themselves in the same range as the affinity of antibodies to their target molecules. However, with a maximum size of 30 kDa, they are significantly smaller and can thus, for example, be attached more densely packed onto surfaces. In addition, aptamers can be synthesized easily, inexpensively and with high reproducibility using chemical synthesizers, without the risk of batch-to-batch variations as observed for antibodies. Their broad spectrum of possible usages is also due to aptamers’ low sensitivity to physical and chemical degradation. Therefore, they can be used in a vast variety of different buffers. Should they degrade by structural transformation, it is always possible to fold them back into their functional three-dimensional structure by thermal regeneration.

Aptasensors: The new generation of biosensors

The aptamers’ broad spectrum of target molecules and their corresponding extensive application range have been described in numerous publications. Some derived innovative products have already been reported to have come onto the market [6]. In addition to their use in lateral flow devices (LFDs) and in multi-well plate assays, the successful development of aptamer-based biosensors, also known as aptasensors, deserves a particular mention. Usually, an aptamer applied in an aptasensor is immobilized on a sensor surface to act as a bioreceptor that triggers a signal transduction upon binding to its target molecule. Optical, mass-sensitive and electrochemical systems have so far been successfully implemented. The latter were developed, for example, to detect the anthracycline daunorubicin and its hydroxy derivative doxorubicin. These carcinogenic, mutagenic and embryotoxic agents are widely used in cancer therapy. However, large amounts of the drug are not metabolized by patients during treatment and instead excreted. Therefore, there is a demand for detection systems to monitor the concentration in patients’ blood and, for public safety, in drinking water. Using square wave voltammetry (SWV) and electrochemical impedance spectroscopy (EIS) technology, both can be achieved using a high-affinity daunorubicin aptamer [7], with the latter having now reached a sensitive detection limit of 28 nM doxorubicin [8, 9]. These examples demonstrate the enormous potential of aptamer-based biosensors as a cost-effective alternative to other detection methods.

Aptamers are next-generation detection molecules which already represent a real alternative to antibodies because of their unique properties and their seemingly endless range of applications in analytics and therapeutics. In the future, new methods of generating “expanded” aptamers from artificial building blocks (SOMAmers, Clickmers, etc.) will open new dimensions for the application spectrum of aptamers.

Generating the results was made possible by project funding from the German state of Brandenburg as well as the Federal Ministries of Economic Affairs and Energy and of Education and Research.