“Game over” for the Paris kilogram

For about 200 years, any mass given in kilograms, grams and micrograms referred to a defined artifact accessible in only a single location on earth. A small metal cylinder had represented one kilogram since the metric system was introduced in France. Its successor became world famous as the “International Prototype of the Kilogram” (IPK). Now the era of the last remaining artifact in the International System of Units (SI) comes to an end: From the 20th of May 2019, with the new SI coming into force, the kilogram is defined by a fixed value of a natural constant and is thus theoretically accessible at any time and at any location in the universe.

From a multitude of units to the unified system

In the 18th century, calls became louder for a common basis for measurements. An unmanageable number of measurement units had emerged across cities and geographical regions. Scientists in Europe realized the urgent need to base measurements for trade, namely weight (mass) and length, on recognizable, reproducible units. The British Empire, for example, had needed to maintain a collection of weight sets that were being used by their trading partners. This “cabinet of foreign weights” is still on display in the Science Museum in London (see Fig. 1). 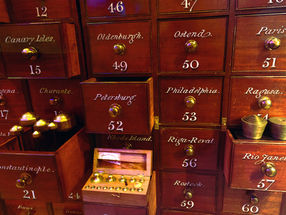 Fig. 1 Royal Mint's Cabinet of Foreign Weights, 1818–20 (cutout), exhibited in the Winton Gallery at the Science Museum in London

The standardization of weights and measures in France began during the time of the French Revolution and was expedited by the French Academy of Sciences (“Académie des sciences”) [1]. The first metric system was introduced. At that time, the intention was to base those measurement units on natural physical constants of the earth, using “mother earth” as a given reference and replace the previously used units derived from the human body (e.g. feet or cubits). With this in mind, a meter was defined as “one ten-millionth of the distance between the north pole and the equator using the meridian that crosses Paris”. For this purpose, the arc of meridian between Dunkirk and Barcelona was measured as accurately as was possible at that time (between 1792 and 1799). The result was used as a reference for the new measurement unit, the meter. Based on this definition of the meter, the gram was defined as the mass of a cubic centimeter of water [1].

History of the kilogram

One gram, as defined above, turned out to be a rather small reference unit for commercial transactions. Therefore the idea of using “a kilogram”, representing one thousand grams instead, was created. In 1799 a representation of this mass of one liter of water (equaling the mass of one cubic-decimeter of pure water at 4 °C), and made of platinum, was given to the French National Archive for preservation. This artifact is called the “kilogram of the archives” (“le kilogramme des archives”). 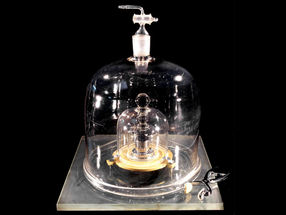 full-screen
Photograph courtesy of the BIPM

Fig. 2 Since 1889 the International Prototype of the Kilogram (IPK) has been stored in a vault at the Bureau International des Poids et Mesures (BIPM) in Sèvres, near Paris. With the redefinition of the kilogram it has now become obsolete.

Development continued for approximately a century more. With the conclusion on the 20th of May 1875 of the Meter Convention, one of the first international treaties between nations, the original 17 signatory states agreed to introduce a standard measurement system based on meters, kilograms and seconds. In 1889, by resolution of the first General Conference on Weights and Measures (CGPM, French: “Conférence Générale des Poids et Mesures”), the International Prototype of the Kilogram (IPK) was introduced in addition to the International Meter Prototype. This kilogram prototype is a cylinder, 39 mm in both height and diameter, produced in 1884 of an alloy of 90 % platinum and 10 % iridium. The mass of this IPK was designed to be as close as possible to the previous realization, the kilogram of the archives. The Meter Convention also established a scientific institution to take care of these reference standards and associated calibrations. The International Bureau of Weights and Measures (BIPM – “Bureau International des Poids et Mésures” in French), located in Sèvres near Paris, still has the same responsibilities today. The IPK, stored in a vault at the BIPM, is also known as “le grand K” or described with the symbol “” (Fig. 2).

The mass system consisted of a whole assembly of kilogram standards: references for the BIPM laboratory as well as one kilogram standard for every nation that had signed the Meter Convention. These national standards, official copies of the IPK, were to be calibrated against the IPK approximately every 40 years, in order to maintain traceability of mass measurements in these nations to the reference IPK in Paris. The IPK served as the global reference for the SI unit kilogram until 2019.

The instability of the kilogram unit

The regular re-calibrations of the national kilogram prototypes at the BIPM revealed instabilities and drifts over time. However, it was not possible to find out:

The reason for this is because the man-made artifact, the IPK, is both the definition and realization of the kilogram unit and is therefore the most accurate (in fact the “absolute”) kilogram. Therefore, there is no means of monitoring or measuring or calibrating the IPK.

Decades of project work as a result

In addition to the instability of the IPK, another problem was that the kilogram in the old SI was linked to the definitions of other base units (ampere, candela and mole) and thus prevented an improvement of the SI. The suggested solution was to define the unit of mass on the basis of a natural constant. Research went on for decades on this path. The CGPM encouraged scientists around the globe to invest serious efforts to solve the issue (e.g. [4]). The example of the meter definition showed the way to go: after two redefinitions in 1960 [5] and 1983 [6] the meter was defined on the basis of an exact value of the speed of light (299 792 458 m s–1), which replaced the original meter as a physical prototype. Correspondingly, it had now become necessary to find a fundamental physical constant for the new definition of the kilogram and to assign a fixed, absolutely invariable value to this constant. Eventually the Planck constant h was chosen, which can be expressed as energy multiplied by time (J s = kg · m2 · s-1), so if “s” and “m” are defined, any fixed value of the constant would define “kg”.

Fig. 3 Paradigm shift: Until recently, natural constants such as the Planck constant h were measured within the system of units. In the new SI, all base units are defined using frozen values of natural constants.

Both experiments, although completely different in nature, ultimately delivered results that were considered consistent enough and “fit for purpose” to re-define the kilogram in terms of Planck's constant. This was the conclusion after decades of international project work in various scientific institutes around the world. Mettler-Toledo has contributed significantly with knowledge and technology to the project partners and thus supported both experiments.

What was needed to redefine the kilogram had been achieved after the two experiments independently provided consistent and reliable enough results with the required measurement uncertainty. This cleared the way for a comprehensive revision of the SI. At the same time as the efforts to re-define the kilogram, other SI units were re-defined or their definitions re-worded. At its 26th meeting in November 2018, the CGPM adopted a fundamental overhaul of the International System of Units (SI). This now meant fixed, invariable values of seven selected natural constants to which all SI units refer [7].

The new definition of the kilogram is therefore:

Implications for everyday weighing and calibrations

Changes to the SI have been made with great care and precaution. A set of conditions was established as a prerequisite for the adoption of the SI. Among them were consistency and continuity of the measurements in the SI. This has been perfectly adopted for the case of the kilogram: with the new definition, no change will be noticed in the weighing world. A kilogram will weigh exactly the same before and after May 20, 2019. 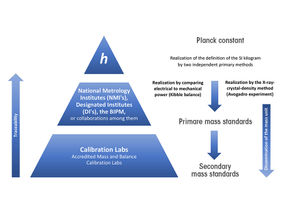 Fig. 4 The dissemination of the international and national kilogram remains unchanged in the future (except for the starting point). Source [8]

The dissemination of reference standards of mass to industry and trade will remain unchanged in the future. Traceability to the new realizations of the kilogram, established by calibration services of competent providers, will be done with exactly the same accuracy and uncertainty before and after the entry into force of the 2019 SI redefinition. The new system starts with internationally coordinated realizations of the measurement unit at national metrology institutes (NMIs) by Kibble balances or Avogadro experiments, traceable to Planck’s constant. These produce traceable mass artifacts that are then used to calibrate mass standards and weight pieces in accredited labs. These finally are used to calibrate balances.

Except for the starting points, the established system and procedures and actors will be exactly the same (see Fig. 4) [8]. But the benefit of the new system is that a kilogram will continue to weigh the same. The new system, based on natural constants, is absolutely stable. It enables more accurate measurements and creates completely new possibilities, such as representing masses in the gram or milligram range directly as the primary standard. For science, technology and engineering, the new SI represents a decisive step forward.

So it is now “game over” for the prototype kilogram in Paris. It will spend its well-deserved retirement continued to be safely locked up at the BIPM.

Kategory: Focus Topic: Revision of the SI | Redefinition of the Kilogram

The traceability of measurement results

Metrological traceability is necessary for consistent, comparable and valid measurement values. As a fundamental concept of modern-day metrology, it allows measurement results to be (…)

1 kg Redefinition: Everything different, nothing changes

A new definition of the kilogram was necessary, in order to ensure the measurement unit is independent from a physical object. (…)