Automated exposure of human lung cells at the air-liquid interface

The current debates on driving bans in European cities show not only how important air quality is to the public but also reveal the lack of available methods to directly assess the adverse effects of air pollutants on human health. Exposing human lung cells to aerosols at the air-liquid interface, in a similar way to how this occurs in the open, promises significant advances and is increasingly being used by leading researchers worldwide.

Today's legal thresholds for air pollution are partly based on epidemiological studies that correlate mortality and morbidity with measurements from public monitoring networks. The association found can demonstrate the impact of air pollutants on human health but cannot prove their immediate effects without additional toxicological data.

Methods for assessing the toxicity of air pollutants using human cells have not yet been standardized. In most such laboratory experiments, collected particles are applied as a suspension to human lung cells. Not only are the conditions of these cell experiments non-physiological, the results obtained are not suitable to assess the effects of real-life, complex mixtures of aerosols resulting from incineration. The estimation of the applied dose is another difficult issue.

An automated system for reproducible exposure of human cells

Below we will present the techniques we developed for simultaneously measuring the biological effects and the particle dose of aerosols using an exposure system for human lung cells. This system enables both reproducible sampling and conditioning of aerosols as well as the exposure of cell cultures under conditions that are similar to those in the human lung. Large scale measurement campaigns have demonstrated the suitability of this system for complex combustion aerosols. The system is now being manufactured by the company Vitrocell Systems GmbH (Waldkirch, Germany) and is distributed worldwide (Fig. 1). Its basic principles were described by Paur et. al (2011) [1]. 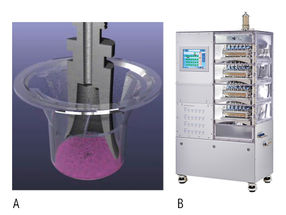 Fig. 1 (A) Exposure setting in an exposure chamber: the airborne particles are brought to the surface of the human lung cells through the aerosol inlet. (B) The automated exposure system to expose cells to aerosols (Photo: Vitrocell Systems GmbH)

In the exposure system, the cells are cultured in paralleled exposure modules on membranes supplied with nutrient medium from the base. The aerosol, which is classified through a size-selective inlet, is conditioned to a temperature of 37 °C and 85 % relative humidity and subsequently passed directly over the cell surface, where it settles. Control measurements in the parallel chambers allow replicates and simultaneous control measurements with clean air and filtered aerosol to be carried out and the deposited particle dose to be determined. The exposed cell samples are analyzed further using standardized bioassays to quantify biological endpoints that shed light on the mechanisms and effects of the aerosols. The dose-response relationship allows the toxicity, which can manifest itself in inflammation or damage to the DNA, to be assessed [2].

Exposing cell cultures at the air-liquid interface has several advantages. Direct sampling from exhaust fume flows eliminates the need for the time-consuming and error-prone particle collection on filters. Gases and particles can be sampled either simultaneously or separately. There is also no need to resuspend the particles in a biological medium, which could lead to chemical and physical changes in the particles and make it difficult to determine the actual applied dose. And lastly, like in the human lung, the particles are deposited directly on the cell surface without the possibility of an added solvent causing biological effects. Controlling the temperature, the humidity and the volume flow ensures high reproducibility of the deposition efficiency and therefore of the subsequent biological measurements as well. Recording all relevant physical parameters makes it easy to prove that the test procedure has been performed correctly or to identify any sources of error. The exposure system’s high level of automation guarantees compliance with the preset test protocol and thus the reproducibility of serial measurements.

Under standard conditions, only about 1.5 % of the particle concentration is deposited on the cells, which prevents overdosing. The applied dose can be determined by an integrated quartz crystal microbalance (QCM) if the surface concentration is at least 20 ng/cm2. At lower concentrations, image evaluation can be applied to microscopy images of exposed surfaces to estimate the dose where aerosol densities are known. To increase the deposition efficiency, an electric field was integrated into the exposure module. Depending on the charge state of the aerosol, this allows the dose that deposits to be increased up to tenfold.

Applications for the cell exposure technique and outlook 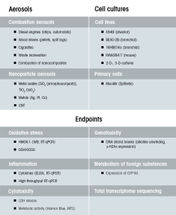 Fig. 2 State of the art: Examined aerosols (top left column) and cell cultures (top right column) as well as bioassays from cell cultures and endpoints to determine the effects

Especially in recent years, research institutes and companies have increasingly been using the technique. Measurements of dose-response relationships were performed using the aerosols and cell cultures shown in Figure 2. Lacroix et al. (2018) [3] recently gave a review of the state of the art. When investigating complex combustion aerosols, the biological effects of gaseous and particulate pollutants can be determined simultaneously.

Current research is aimed at extending exposure duration to 48 hours and increasing the deposited dose in order to use the procedure at the lower concentrations of the air in our environments. There is also a need to validate the method using animal experiments to reduce the use of laboratory animals in mandatory testing.