Organic light emitting diodes (OLEDs) are presently conquering the market for displays of smartphones and TVs. They also have a great potential in lighting applications. Current devices for the blue part of the visible spectrum lag behind their green and red counterparts in terms of efficiency and durability. Huge efforts are therefore undertaken to improve the performance of blue OLEDs. Recent studies from the Gilch group have shown that devices based on aromatic carbonyls could open a way to mitigate the issues related with blue diodes.

The billion shipped OLED smartphones are impressive evidence for the maturity of the technology. Despite this, many researchers in academia and industry are currently working on further improvements. One focus is the efficiency of OLEDs emitting blue light. Presently, commercial blue OLEDs convert electric energy less efficiently into light than their green and red counterparts [3]. Obviously, for both display technology and lighting applications blue, green and red OLEDs with high efficiencies are desirable. Grasping the reasons behind the shortcoming of blue OLEDs requires a brief look into the light generation in these devices.

Structure and efficiency of OLEDs

Fig. 1 Schematic structure of an OLED device (A). Several layers of organic semiconductors are stacked between two electrodes. The emission occurs from the central emissive layer. Different approaches for efficient OLEDs either rely on phosphorescence emission (B), thermally activated delay fluorescence (C) or on upper triplet states (D).

An OLED consists of multiple layers of organic semiconductors (Fig. 1A) [4]. The outer layers are connected to electrodes. If a voltage is applied the cathode injects electrons into the n-type (electron conducting) semiconductor next to it. The anode injects holes, effectively “missing” electrons, into a p-type (hole conducting) layer. Electrons and holes migrate towards the emissive layer. Here pairs of electrons and holes ought to recombine radiatively. To facilitate this photon generation, the emissive layer is doped with chromophores, termed emitters. In the course of the recombination, electronically excited states of the emitters (S1 and T1 states) are populated. Such excitation ought to decay with the concomitant generation of a photon. However, a fundamental property of electrons makes efficient emission a challenge. Electrons, and thereby also holes, carry a spin, they are s = ½ particles. As a consequence, electron hole pairs can adopt an overall spin of S = 0 (multiplicity 2S + 1 = 1, singlet) or S = 1 (multiplicity 2S + 1 = 3, triplet). Singlet and triplet pairs form in a ratio of 1:3 [5]. The same ratio applies to the initial excitation of the emitter molecules. In common organic chromophores emission only occurs from the excited singlet states and not the triplet ones [6]. In such fluorescence emitters ¾ of the excitations are therefore lost. With the aid of phosphorescence emitters, singlet and triplet excitations can be converted into light (see Fig. 1B) [7]. In these emitters, emission from the T1 state (phosphorescence) is possible so that the triplet pairs can be directly utilized. Singlet excitations are converted into triplet ones by a process termed intersystem crossing (ISC) and will then also contribute to the emission.

Current phosphorescence emitters are complexes of iridium ions. Presently available iridium complexes emitting in the blue range of the visible spectrum are photo-labile [3], preventing their use in OLEDs. Thus, blue OLEDs use fluorescence emitters which, however, “waste” ¾ of the electron hole pairs. To mitigate that and to become independent from the rare and expensive iridium, emitters based on a variety of concepts are currently being developed. The most advanced ones rely on thermally activated delayed fluorescence (TADF) [6, 8]. For TADF, molecules with small energetic spacing of S1 and T1 states are required (Fig. 1C), allowing the triplet excitation to be converted into a singlet one with the aid of thermal energy (reverse intersystem crossing, rISC). Emission then occurs from the S1 state. However, TADF emitters have some drawbacks like their broad emission spectra and small radiative rate constants [2, 9]. 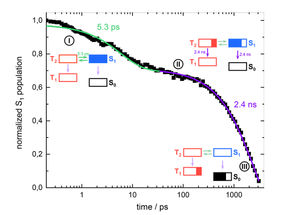 Fig. 2 Decrease of the S1 population of TX over time. The relative populations of the relevant electronic states are represented by the filling of the bars in the three diagrams. Populations are shown directly after the photo-excitation (I), after equilibration between S1 and T1 (II) and after depletion of the equilibrated states (III). Data from [10].

Molecules in which the S1 state is accessed via an upper triplet state (e.g. T2 state) would allow for sharper spectra and higher radiative rate constants. In a collaborative effort, groups in Durham (headed by Andrew Monkman) and Düsseldorf (headed by Peter Gilch) have shown that surprisingly simple molecules – namely aromatic carbonyls – might do the job [10]. The photophysics of one representative of this class, thioxanthone (TX) (for structure see Infobox), was scrutinized by time-resolved absorption and emission spectroscopy. In protic solvents, the photo-excitation of TX to its S1 state results in a bi-phasic decay (Fig. 2) [11]. The first time constant of this decay (about 5 ps) is due to an equilibrium of the S1 state with the T2 one. This assignment is backed by quantum chemistry [12]. The equilibrium persists for a surprisingly long time, around 2 ns. This implies that the transition of an upper triplet state to the lowest one is slow. The finding violates an important rule of photophysics – the Kasha rule [13]. A corollary of this equilibrium is that a population brought to the T2 state ought to be transferred to the S1 state. The latter should lead to fluorescence being emitted. 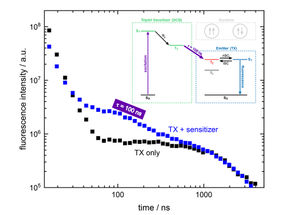 Fig. 3 Fluorescence decay of TX in absence (black) and presence (blue) of the sensitizer over time. The Inset shows a kinetic scheme of the experiment conducted: The triplet sensitizer is optically excited, causing most of its population to be transferred to its T1 state. Through diffusional encounter of sensitizer and emitter the energy is transferred to the triplet state of the emitter followed by a delayed fluorescence emission of this molecule. Data from [10].

To test this, we devised an experiment with a sensitizer. (Note that this sensitizer is employed solely for testing purposes, not for the actual device.) The sensitizer, 1,4-dichlorobenzene (DCB), was brought to its T1 state via photo-excitation. Because the absorption spectra of DCB and TX overlap, one cannot avoid the excitation of both TX and DCB. Therefore, in a time-resolved emission experiment on the nanosecond to microsecond time scale (Fig. 3), the behavior of solutions containing TX and DCB plus TX were compared. In both experiments, the fluorescence emission of TX was traced. For DCB/TX a fluorescence component absent in the only TX containing solution was observed. The characteristic time constant of this component is 100 ns, exactly matching expectations for a diffusion limited process. Thus, excitation of DCB triggers an energy transfer process eventually resulting in fluorescence emission of TX.

As other pathways like Förster transfer can safely be excluded, the energy initially absorbed by the sensitizer has to be transferred via the triplet states. Because a reverse intersystem crossing starting from the T1 state of TX can be ruled out on energetic grounds, rISC starting from an upper triplet state (T2) is operative here.

The results show unequivocally that TX in a suitable solvent can convert singlet as well as triplet excitations into light. As outlined above this is a crucial property of an OLED emitter. The compound emits in the blue region of the spectrum, for which presently no iridium-based emitters can be employed. It does so with a high radiative rate constant. Finally, TX and related compounds are easily produced by simple organic synthesis. Presently, we are investigating derivatives of TX which outperform TX in terms of emission efficiency and spectral properties. The sensitization experiment allows for fast and easy screening of these potential emitters to find those best suited for OLED applications. A crucial question still to be answered is whether the upper triplet state T2 will also be accessed in an actual OLED device. 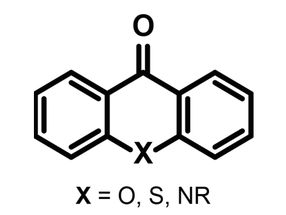