The fingerprint of the diatom

In today’s laboratories, elemental analysis methods are used for more than just determining total metal content in various sample matrices. They have become an important tool for life science research in environmental science, medicine and biology. For this paper, single-cell ICP time-of-flight mass spectrometry (single-cell-ICP-TOF-MS) was used for multi-elemental analysis of individual diatoms. This technique is likely to become ever more important, with ecotoxicology being just one field of research. 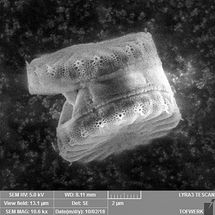 Diatoms are an essential component of the eukaryotic phytoplankton and one of the key organisms in marine ecosystems (Fig. 1). Their decisive role is based on two main factors: (i) they form the basis of the pelagic food web and (ii) as photosynthesis-performing organism they play a significant role in carbon dioxide fixation [1, 2]. As a consequence of their pronounced adaptability, well over 100,000 species have evolved, which vary greatly in size, shape and habitat. The diversity of these organisms makes them ideal indicator organisms for various types of environmental parameters when used as ecotoxicological test organisms [3]. Algae have therefore found their way into worldwide regulations and test procedures aimed at assessing substances, including various DIN standards, the REACH Regulation and the Water Framework Directive. Due to their simplicity and informational value, the standardized tests which typically target the algae’s photosystem, with fluorescence being what is measured. They allow the investigation of changes in the algae´s population and – when compared with a control sample – the toxicity of test substances to be determined. However, this method is only suitable for pure substance and not for testing substances´ combined toxicities.

Furthermore, fluorescence measurements do not provide information on the actually accumulated concentrations of the test substance. If metals are added, the average total content in a larger number of algae can be determined via ICP-OES or ICP-MS after microwave-assisted cell digestion. This, however, leads to the loss of information on the variation of the metal content within a cell population [4]. Data based on single algae, which would allow the metal variation in a population to be mapped, can only be achieved by single-cell-ICP-MS [5]. To do so, the algae suspension is introduced directly into the plasma. Sufficient dilution ensures that only a single alga is measured per time interval [6]. Since this takes place at very short integration times, classical detectors such as quadrupoles can determine only a single isotope. Applications like the evaluation of the toxicity of a mixture of substances (combined toxicity), however, require multi-element information for each individual alga. This requires methods that perform quasi-simultaneous multi-element detection in a single time interval. The technique that can achieve this is ICP-TOF-MS. In addition to simultaneous multi-element information per alga, the number of detected signals can also be used to draw conclusions about the number of algae in the respective sample. For our future research, we would like to use the wealth of information derived from the elemental concentrations per alga and the number of algae to make a more detailed and accurate ecotoxicological assessment based on actual measurement data.

ICP-TOF-MS for a multi-element fingerprint of the diatoms 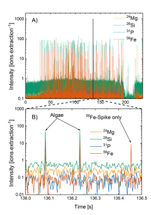 Fig. 2 A) Single-cell-ICP-TOF-MS raw data Cyclotella meneghiniana; four characteristic “fingerprint elements” were selected as the basis for data extraction; B) Enlarged area: based on the elemental fingerprint, “non-algae events” can be distinguished from algae events.

Conventional ICP-MS systems “scan” the mass range so that only one element or isotope per time period (dwell) is recorded by the detector. A few years ago, however, ICP-TOF-MS witnessed a true renaissance because it allows the (quasi) simultaneous acquisition of a complete elemental mass spectrum in short transient signals at great speeds and high resolution. Hence it is possible to detect the entire periodic table for a single cell.

For diatoms, the elements silicon, magnesium, phosphorus and iron are particularly important. Silicon is the main component of their shell, magnesium plays a central role in photosynthesis and both iron and phosphorus are important for cell dynamics, making these four the “fingerprint elements” of the diatoms. Figure 2 shows the traces of the elements mentioned above for a typical single-cell-ICP-TOF-MS measurement of the diatom Cyclotella meneghiniana (CM), which is depicted in Figure 1. Where traces of the four elements are perfectly superimposed (Fig. 2 B), there is clear evidence an algae event has occurred in the plasma. As a consequence, the alga can be identified by its “elemental fingerprint” and separated from the background. As shown in Figure 2 B, this allows “random events” to be distinguished from algae events. In the case of the examined algae samples, up to five random events are recorded for each actual algae event. Simultaneous multi-element analysis thus provides valid single cell data [7].

From the data obtained it is possible to determine whether an algae event has occurred in the plasma and thus, if the transport efficiency of the sample introduction system used has been calibrated, to calculate the number of algae in the sample. However, in order to obtain information about (i) the algae species or (ii) the current lifecycle phase, more powerful models are required. Multivariate data evaluation offers a range of suitable methods, such as principal component analysis, regression analysis or discriminant analysis. 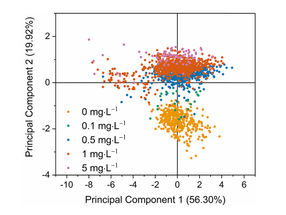 Figure 3 shows an example of how powerful it is to combine simultaneous multi-elemental analysis using ICP-TOF-MS and multivariate data evaluation. The diatom species Cyclotella meneghiniana was exposed to different zinc concentrations (0.1 mg∙L-1, 0.5 mg∙L-1, 1 mg∙L-1, 5 mg∙L-1), thereby being subjected to varying degrees of environmental stress. The algae events were extracted from the data set as described above and analyzed using principal component analysis. The results show clearly that, depending on the zinc exposure concentration, the investigated algae fall into different clusters.This approach can pave the way for various uses, for example in ecotoxicology. In addition to the number of algae in a population, the method simultaneously records the concentration and the tiniest of changes in the elemental fingerprint – the information density is many times higher than with fluorescence measurements. In future, it will therefore also be possible to investigate the toxicities of substance mixtures. 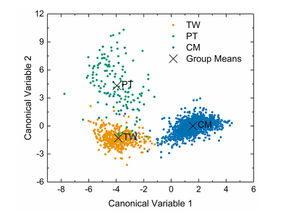 Multivariate data analysis, however, not only allows differentiation of exposure levels, but also the algae species to be determined. In Figure 4, three different diatom species (Thalassiosira weissflogii (TW), Phaeodactylum tricornutum (PT) and Cyclotella meneghiniana (CM)) were told apart by discriminant analysis based on their characteristic “elemental fingerprints”. A possible application area would be to investigate species diversity in surface waters and thus, for example, the effects of changes in water quality.

Combining all the information gained might, in the future, allow the species and the stress state in environmental matrices to be determined simultaneously, thereby bridging the gap between innovative elemental analysis methods and the ecotoxicological assessment of substances.

Elemental analysis and (eco)toxicology – will single-cell-ICP-TOF-MS become the groundbreaking link?

Single-cell-ICP-TOF-MS makes it possible to perform virtually simultaneous multi-elemental analyses of individual cells in a short period of time. Characteristic elemental fingerprints allow algae to be identified reliably in a large data set. In combination with multivariate statistics, the raw data obtained provide valuable information on the stress state of the algae.

After validation, it will become possible to derive ecotoxicological limit values for pollutants from the data. The techniques can also contribute to medical and toxicological research. For example, human cell lines could be incubated with critical elements to find out more about the toxicological effects.

Elemental analysis tools are increasingly being used for life science research in environmental science, medicine and biology, a trend that will probably continue and accelerate.

Weighing in the safe weighing range ensures results are valid, reliable and right the first time. (…)