How to analyze active unknown unknowns?

More than ever, consumers are concerned about the food they consume. For example, for botanical extracts used in food products and food supplements, fraud is quite common. It is evident that specifications, quality control and regulation of botanicals need to be improved [1-3].

Product impairment is not only caused by natural variances or processing, but also by contaminations, residues, falsifications, adulterations, degradation products etc. along the global product chain. The addition of inexpensive materials or illicit compounds is quite common. Among thousands of compounds in a food sample, only a minor portion is identified. In other words, for the major sample part, it is not known which components are bioactive and could impact consumer health. When the same kind of food is consumed regularly, even trace level amounts of bioactive compounds matter, as known for endocrine disruptors [4].

The need for effect-directed non-target analyses

Routine quality control of products is based on the main ingredients or known knowns. But this keeps most of the food components outside the analytical focus, as evidenced by the thousands of components separated by comprehensive chromatographic techniques. It remains unclear for most of the measured signals (features) to which compound they belong. Which analytical effort is affordable to cope with the daunting challenge of evaluating the many thousands of unknown features? Are we analytically on the right track? An analytical technique that could deal with this complex task should be matrix-tolerant and avoid a discrimination of ingredients. The sample should be subjected to the separation system in an original as possible state, meaning sample preparation should be minimalistic. 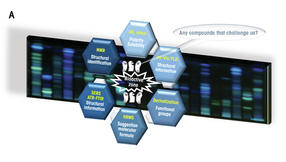 Fig. 1 Analysis of unknown active compounds: A)&nbspinformation on polarity, solubility, the spectral and chemical properties as well as microbiological/biochemical activities obtained by HPTLC-UV/VIS/FLD-EDA-HRMS for many samples on a single plate

Non-target analysis is superior to target analysis, if the whole food sample is of interest. Nevertheless, we only see what is stable, extractable, separable and detectable (“The 4ables”) with the given analytical system. Hence, minimalistic sample treatment and different detection principles are a must. Mass spectrometry as commonly used is no panacea, as not every molecule does ionize when using electrospray ionization under standard settings.

So far, selected chemical marker compounds have been used to evaluate product quality, but these cannot represent the whole sample complexity. Bioprofiling or effect-directed fingerprints ensure much better the product quality and especially product safety along the global food chain. 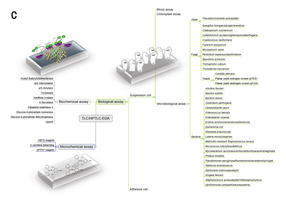 It is evident that chromatography combined with an effect-directed detection is superior to mere microtiter plate assays. Beyond a sum parameter, more details on observed effects are needed for such complex systems like foods. The need for information on individual active compounds is inevitable.

Our brain and mind are trained in a highly efficient way of evaluating pictures we see every second, day by day. Data compilation as an image and its analysis by artificial intelligence is nowadays a trend. Per se, high-performance thin-layer chromatography (HPTLC) is an imaging technique and constituents of side-by-side separated samples are compared rapidly. 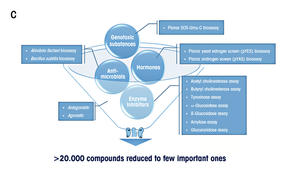 Fig. 1 C) Spotlight on the principle of assays reducing the thousands of compounds to the relevant active ones

When this planar image with all the stored components is combined with bioassays, receptor assays or enzymatic assays (effect-directed analysis, EDA), new information is gained. In addition to data on polarity, solubility, chromatographic behaviour, spectral characteristics and chemical fingerprints, effect-directed microbiological or biochemical fingerprints are obtained that are evaluable by artificial intelligence [3] (Fig. 1).

For example, yeast cells (containing the human estrogen receptor hRα and a reporter gene encoding for β-D-galactosidase) were cultivated and applied on the chromatogram [4]. Using a fluorogenic substrate (4-methylumbelliferyl-β-D-galactoside), endocrine-disrupting compounds like estrogens are detectable as a blue fluorescent zone in many food products (Fig. 2). 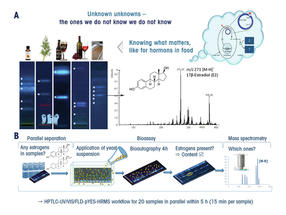 Fig. 2 Analysis of unknown estrogen-like hormons by HPTLC combined with the planar yeast estrogen screen (pYES): Saccharomyces cerevisiae cells containing the human estrogen receptor hRα and reporter gene encoding for β-D-galactosidase applied on the chromatogram that detect an estrogen-like hormone as a blue fluorescent zone by the fluorogenic substrate 4-methylumbelliferyl-β-D-galactoside (MUG) in food products and waste water, followed by mass spectrometric characterization (A); the HPTLC-UV/VIS/FLD-pYES-HRMS workflow takes only 15 min per sample (B) calculated for several samples in parallel on a plate

According to John Tukey, an American statistician, it is far better to give an approximate answer to the right question (what is in a sample that matters?) than an exact answer to the wrong question (considering only what is known and can be targeted/analyzed). Further in situ assays were reported to detect antibiotics, genotoxic compounds or diverse enzyme inhibiting compounds after effect-directed profiling of plant extracts and functional food [1-8]. Quantitative surface scanning using direct analysis in real time mass spectrometry (DART-MS) [7] or elution head-based interfaces for direct zone elution into the mass spectrometer [6, 8] were used to characterize the active compounds detected. Such an efficient effect-directed profiling technique is also able to point to active principles/mechanisms of traditional medicines and support the research and development as well as quality control of health food or functional food. Such a straightforward, hyphenated bioanalytical imaging technique can help to discover unknown active compounds (Fig. 3). If you are interested, feel free to contact me and join our module on HPTLC-EDA-HRMS that is open to externals. Monitoring of products by volunteers

More and better analyses to check the quality of food, dietary supplements, nutraceuticals, cosmetics, pharmaceuticals, environmental samples etc. are urgently required. Citizen science has given scientific access to highly motivated amateurs. An analytical, public domain, open-source tool could substantially contribute to improving product quality, if highly motivated amateurs could perform a fast product check. Even though spectral techniques are powerful, there has not been an open-source panacea tool so far. Hence, we also focus on miniaturization, think differently and exploit new technologies in the field of chromatography (Fig. 4) [9]. 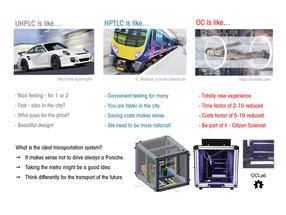 Fig. 4 Metaphor for UHPLC, HPTLC and OC in the age of ultra rapid separations: the metro is most likely faster in the city and you need no styling (no sample preparation); think differently and exploit new technologies as for OC

The potential of open-source hardware or software, 3D/inkjet printing, sophisticated image evaluation by machine learning algorithms and artificial neural networks was exploited [9-11] and combined with ultrathin-layer chromatographic separations [12]. The Office Chromatography Laboratory (OC Lab), combining all the steps of planar chromatography in the same, all-in-one, miniaturized system, was recently reported [11]. Instead of printing inks on papers, chemical solutions are printed on layers. Sample application, development and derivatization were managed by a simple inkjet print head.

Open-source developments are similar to radical chain reactions, exponential in progress and highly dynamic. It is in many aspects an interesting experiment worth contributing to.

Effect-directed analysis by HPTLC-bioassay-HRMS
Modul at JLU Giessen, 26.02. – 01.03.2020:
The 5-day practical course focuses on different assays. The full workflow HPTLC-UV/VIS/FLD-assay-ESI-HRMS or DART-MS is shown. Single days can be booked per email, as in flyer at our homepage.

See open calls for PhD positions at our homepage.

Trend barometer: taking the underground to the airport

Yes – you can talk about an ‚underground system’ in terms of analysis. Many samples are forwarded in parallel – including unstyled raw extracts in any condition. The connection to the (…)