Mercury in the environment

Mercury is undisputedly one of the most toxic elements. In 2013, the Minamata Convention on Mercury to restrict the production and emission of this heavy metal was adopted in Geneva. It regulates the production, use and storage of mercury. For example, new mines may no longer be built and existing ones must be closed within 15 years. In the foreseeable future, mercury will therefore only become available from recycled materials.

Due to their toxicity, elemental mercury and its compounds are classified as priority pollutants in the European Water Framework Directive. It is therefore essential that there is a safe trace level analysis method to detect and quantify mercury in water, air and soil as well as in food. Traces of mercury are bioaccumulated in organisms. Even at low concentrations this poses substantial health risks and can lead to death. While absorbing metallic mercury through the digestive tract is comparatively harmless, inhaled vapors are highly toxic. Organic mercury compounds such as methylmercury, which are almost completely resorbed in fatty tissue, are extremely toxic. In the food chain they can be formed, for example, through biomethylation. One of the main sources of human exposure is seafish.

A variety of analytical methods are used to monitor very low concentrations of mercury. Liquid samples can be analyzed by cold vapor technology and optical spectroscopic detection, but also by means of direct analytical methods such as optical emission spectrometry with inductively coupled plasma (ICP-OES) or inductively coupled plasma mass spectrometry (ICP-MS). Solid samples are determined directly, for example by solid atomic absorption spectrometry (AAS) or mercury-specific analytical instruments of different manufacturers. The sample is pyrolyzed and atomic mercury detected. ICP-MS in combination with high-performance liquid chromatography (HPLC) is used to quantify organic mercury compounds (mercury species). Relevant for selecting the appropriate analytical method are factors such as precision, detection power and interference due to matrix effects, but also sample throughput and the costs per sample. This paper will give an introduction to the different techniques and compare these. 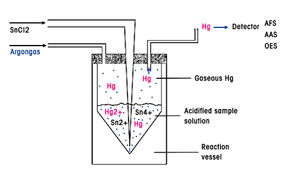 In cold vapor technology, the mercury compounds are reduced to atomic mercury in a chemical reaction with a reducing agent such as Tin(II) chloride (SnCl2) or sodium borohydride (NaBH4) (Fig. 1). Depending on the sample matrix, organic mercury compounds are decomposed in advance by various methods (e.g. DIN EN 1483, DIN EN 13506, US EPA 1631). The subsequent detection of the atomic mercury is performed using optical spectroscopy methods such as AAS, ICP-OES or atomic fluorescence spectroscopy (AFS).

Optical spectroscopy as detection method of the cold vapor technique

Many standards around the world stipulate the use of cold vapor technology in combination with atomic absorption spectroscopy (AAS) as the detection method for mercury. For this purpose, simple, robust and cost-effective flame AAS instruments are equipped with the appropriate fittings for mercury analysis. The flow injection technique of a hydride system involves the reducing agent being mixed with the sample, which subsequently reacts to atomic mercury and is transported onwards by a carrier gas (inert gas). For improved detectability, the atomic mercury can be passed over an additional gold trap. The mercury is collected by amalgamation, liberated by deamalgamation and passed on with the carrier gas. Detection is then performed in a heated quartz cuvette located in the sample chamber of the AAS system by absorption measurement of the atomic mercury.

Typical detection limit of mercury for this method is at 20 ng/l. The linear, dynamic measurement range extends over three orders of magnitude. The advantage of this technique is that other elements can also be determined.

Further improvements are possible by combining the hydride technique with the more powerful graphite furnace AAS, the so-called HydrEA technique. Instead of into the quartz cuvette, the sample gas (carrier gas with atomic mercury) is led into a gold-coated graphite furnace, where it is collected and detected. This method can typically achieve detection limits of up to 5 ng/L.

It is also possible to combine hydride technology with ICP-OES (optical emission spectroscopy with inductively coupled plasma), which is widely used in routine multi-element analytics. This method gives a large linear dynamic range of more than six orders of magnitude for the determination of mercury and typically achieves very low detection limits of 3 ng/l.

A very simple, robust and cost-effective method for mercury trace analysis is combining the cold vapor technique with atomic fluorescence spectroscopy (AFS) detection. The advantage of this method is the high sensitivity resulting in low detection limits.

The mercur Duo plus from Analytik Jena GmbH is an analyzer specifically for mercury. The system is automated by flow injection (Fig. 2 left) and combines the cold vapor technique with the robust AAS and the more powerful AFS (Fig. 2 right), whereby a large measurement range of over five orders of magnitude is covered. With an additionally integrated amalgamation unit for mercury collection, typical detection limits of up to 0.1 ng/l are achieved. 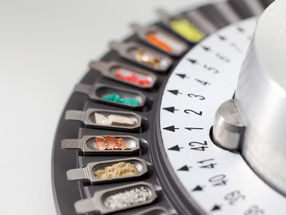 Direct analytical methods, such as direct solid AAS, offer further options for mercury determination. Graphite furnace AAS can also analyze solid or paste-like samples directly and without cold vapor technology. The sample is introduced directly into the graphite furnace using a solid sampler (Fig. 3). Necessary reagents, such as modifiers or standard solutions, can be added automatically. Typical detection limits for this method are between 10 and 50 µg/kg, but not every sample matrix is suitable.

ICP-MS with optional coupling of LC for mercury species analysis

Inductively coupled plasma mass spectrometry (ICP-MS) can be used for direct ultra-trace analysis as a multi-element method for determining up to 75 elements, including mercury. For mercury, the maximum linear measurement range extends over ten orders of magnitude and typical detection limits of 0.3 ng/l are achieved. The challenge lies in the ultra-trace analysis: carry-over effects can occur due to adsorption on sample vessels. Coupling ICP-MS with liquid chromatography (LC) or ion chromatography makes it possible to separate and subsequently quantify different mercury species, such as methylmercury or phenylmercury (Fig. 4).

The advantage of this is that the highly toxic compounds are determined separately and not as total mercury. The toxicity of a sample and its potential effects on human beings and the environment can thus be assessed more reliably.

To select the most suitable analytical method, it is essential to compare the advantages and limitations as well as the measurement ranges and the achievable detection limits. Table 1 lists the methods described above with their advantages, limitations and detection limits. For mercury determination of aqueous and decomposed samples, the robust and powerful cold vapor technique in combination with AAS and AFS detection is suitable. To determine mercury together with other chemical elements, combining a hydride system with AAS or ICP-OES is recommended. On top of its potential for analyzing mercury species, the ICP-MS also offers the most powerful detection limits.

The successful implementation of 'Lean Manufacturing' in several fields has inspired many businesses to adopt this model in laboratories as well. (…)