On December 28, 2018, Carl Remigius Fresenius would have celebrated his 200th birthday (Fig. 1). Not only was he a scientist but also an innovative entrepreneur as well as the teacher of about 5,000 students during the more than fifty years of his pioneering, enduring professional work. It is exciting and inspiring to look closer into his achievements and his spiritual and material heritage [1a-1f]. The examples presented here give an insight into the applied analytics of the man also known as the “Nestor of Analytical Chemistry”. 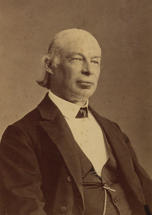 On April 20, 1852, a 34-year-old man with long, dark hair and a well-groomed beard emerges from a carriage in Schlangenbad in the Rheingau-Taunus area of what is now Hesse, Germany. He carefully unloads some large glass bottles and other equipment, including a thermometer. He carefully examines several springs of the spa and notes his observations. Then he dips several of the 6-liter bottles, one after the other, in the water at the rearmost spring of the lower Kurhaus and carefully closes the filled vessels with rubber-coated cork stoppers. In 1850, he had described the purpose of such undertakings:

“Knowing the exact chemical composition of a mineral water is of essential importance in several respects. Firstly, it teaches the physician why water, as we know from experience, possesses the power to heal. It gives the physician a sense of orientation when attempting to use water as a remedy for new illnesses. Secondly, it provides the geologist with pivotal information about the nature and origins of mineral water and about the role it has played in shaping our earth's surface. And finally – so as not to disregard the material aspects – it lets the owner know about the true value of his property.” [2] 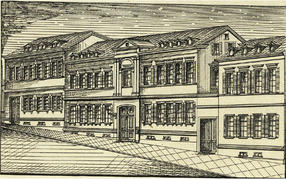 He subsequently goes on to analyze almost all the mineral water sources in the Duchy of Nassau, and many others as well – systematically and, in some cases, several times over. He also investigates whether the substances in the waters stay the same or change over time.

As early as in 1850 and with mineral waters as his research focus, the young man displayed what characterized his life's work as a whole: for him, basic and applied scientific research, acquiring knowledge and commercial gains, belonged inseparably together. It is in this sense that he wanted his teaching laboratory, founded in Wiesbaden in 1848, to be understood (Fig. 2). With it, he added teaching to basic and applied research as his third field of work. Since 2013, the still preserved part of the building complex in which the Fresenius chemical laboratory was located has been a historic site of chemistry and testifies to the chemist's work as a researcher, teacher, scientific publicist and author.

Using today's vocabulary, one of Fresenius’s lines of work would have been service provider. He received projects from both public authorities and the private sector. These were not only content analyses – which were often for expert opinions or arbitration and helped to determine the market value of a product (e.g. an ore) or its health benefits (e.g. a mineral water) – but they often intended to determine the usefulness of what he investigated. One challenge was to find out how weather-resistant slate slabs from different deposits were. Fresenius came up with ideas [3] that could give an answer without waiting years for weathering effects. He hung test plates of the slate in a closed glass vessel over a highly concentrated solution of sulfite (sulfur dioxide), so in conditions similar to present-day acidic rain, and observed their decay or resistance over only weeks. Analogous methods are still being used for materials testing today. For the Portland cement manufacturers, he developed methods to distinguish counterfeit cheap varieties from the original cements [4] – a task that is still relevant today for numerous product types, especially when damage occurs.

Government and scientific institutions made use of the analyst Fresenius’s comprehensive expertise. As early as in 1845 he had published thoughts on the work of the court chemist and in 1864 helped to investigate a poison murder in the Taunus area by analyzing exhumed body parts [5]. While in this case the perpetrator was subsequently convicted, Fresenius’s comprehensive expert opinion helped to exonerate the accused in an alleged murder case in Korneuburg, Austria. 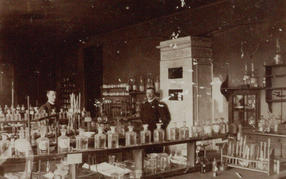 Fig. 3 The chemical laboratory of Carl Remigius Fresenius included a wine lab. Interior view of the “lower wine station”, around 1900. Photo source: Archive of the Fresenius University of Applied Sciences

Fresenius helped to prepare the German Food Law of May 14, 1879, probably the first food law ever enacted, as a member of two commissions of the Imperial Health Office as well as agreements of the chemical societies on food and wine analysis. With his chemical laboratory for agriculture and wine [see Fig. 3], founded in 1868, he and his colleagues, above all Carl Neubauer and Eugen Borgmann, contributed to the research of food and its production as well as to the application of legal regulations through analytical checks.

Realizing that bacteriology, which had only just come into being, was of great importance to hygiene, food and medicine, Fresenius concluded that it was necessary to systematically test food, the natural environment and human excreta – and to this end immediately opened his own department in 1884.

The name Fresenius remains most closely associated with water analysis [6], having investigated more than 100 mineral springs. 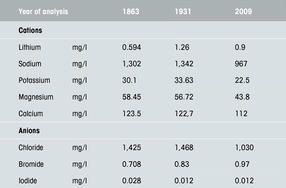 His early trace analysis of Selters spring water [7] calls on us today to take our hats off to the accomplishments of the analyst Carl Remigius Fresenius: from the dry residue of 65.296 kg of water, he enriched the iodide by extracting it twice using alcohol, each time followed by boiling the alcohol down, followed by “mild annealing”, dissolution in water and concentration, acidification and addition of carbon disulfide. After an oxidation step to iodine, the extraction of the remaining iodine and titration with a sulfite solution, Fresenius determined an iodide content of 28 ppb (see Tab. 1).

Posthumous tribute to the achievements of the chemical laboratory

A commemorative publication in the reports of the German Chemical Society of 1919 summarizes the achievements of the pioneer of analytical chemistry, materials science and quality assurance methods, who was also a problem-solving provider of scientific services and an expert consultant, as follows: “From the very beginning, the laboratory was not only used for teaching, but also and to a no lesser extent for scientific and applied work. It was the place where Fresenius and his collaborators worked out all the refined methods that have now become common property of our science; where the analytical methods published by others were critically examined through experimental verification and where all the know-how of analytical methodology in chemistry were finally put to practical use.” [8]

“Every analytical chemist occasionally has doubts about the accuracy of his results, and there are times when he even knows his results to be incorrect. Sometimes a few drops of the solution are spilled, or some weighing mistake occurs. In such cases it requires a strong conscience not to shy away from the effort of repeating the analysis wherever truth is called for and not to make a rough estimate or apply a correction where positive certainty is needed. Anyone without sufficient will-power to do this is unsuited for analytical chemistry, no matter how great his technical ability or knowledge are. A chemist without full confidence in his own work, who would not take an oath pledging the authenticity and accuracy of his work, should never publish such results as certainties, for if he were to do so then the result would be detrimental, not only to himself, but to the whole of science”. [10]

“Knowledge and skills go hand in hand …. With the most thorough knowledge alone, one cannot determine how much household salt a solution contains if one is incapable of pouring a liquid from one vessel into another without it splashing or without a drop running down from the rim etc. Without practice, such skills cannot be learned”. [10] 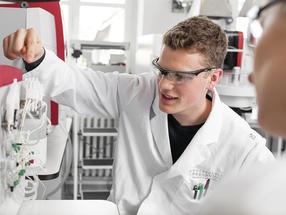 At the Institute for Analytical Research (IFAR) of Fresenius University of Applied Sciences, students work together with lecturers, bachelor and master students as well as doctoral candidates to find answers to present-day analytical challenges.

The journal “Zeitschrift für analytische Chemie”, founded in 1862, has been published continuously ever since, nowadays as the European journal “Analytical and Bioanalytical Chemistry” (ABC). As part of the SGS Group, the Institut Fresenius, with its staff of 650 at its Taunusstein location alone, continues the legacy of the scientific service provider Carl Remigius Fresenius. 200 years after he was born, his teaching tradition lives on in the Fresenius University of Applied Sciences, based in Idstein. At nine locations throughout Germany – since 2019 including Wiesbaden again, its place of origin – Fresenius University runs 56 Bachelor's and 39 Master's degree programs, ranging from therapeutic professions and design to business and media, to offer its almost 13,000 students the environment for a solid, practical education and to guide them to self-responsibility and initiative, all in the spirit of its founder. The “STEM” subjects remain at the university’s core, including biology, chemistry (in particular analytics) and computer science, which started in 2019. At its Institute for Analytical Research (IFAR) [11], students work together with lecturers, bachelor and master students as well as doctoral candidates to find answers to present-day analytical challenges (see [12a-c] for three examples).

Analytical chemistry in the 19th century and today

The chemist Carl Remigius Fresenius died on June 11th, 1897. Among his students were Edward and Otto Mallinckrodt, sons of the founder of the company Mallinckrodt in the United States, (…)