Micelles as a reaction environment

Photoredox catalysis has developed into a powerful tool for the synthesis of organic compounds with diverse structures. However, the high stability of carbon-chloride bonds has long hampered the use of cheap and readily available chloroalkanes as substrates. At the University of Regensburg it could now be shown that the organization of the reacting species in micellar solutions enables the generation and coupling of carbon-centered radicals from non-activated alkyl chlorides via assembly-promoted single electron-transfer (APSET).

Alkyl chlorides are attractive starting materials in chemical synthesis, as they are bulk commodity chemicals, cheap and very stable. While the propensity of alkyl chlorides to undergo nucleophilic substitution makes them good alkylating agents in ionic reactions, the one-electron reduction leading to radical reactivity is more challenging. Recently, photocatalysis emerged as a powerful tool for inducing single electron-transfer to various alkyl C-X bonds. It gives access to carbon-centered, nucleophilic radicals, which are valuable intermediates in the construction of C(sp3)-C and C(sp3)-H bonds [1-3]. However, due to the strong C-Cl bond (327 kJ mol-1), alkyl chlorides display much lower reactivity compared to their bromide (285 kJ mol-1) and iodide (213 kJ mol-1) analogues respectively [4].

An unsolved problem: the activation of stable alkyl chlorides

For the past couple of years our group has been interested in the photocatalytic activation of particularly stable molecules, e.g. compounds displaying very high or very low redox potentials. One solution that has been extensively studied is the accumulation of the energy of multiple visible light photons in one catalytic cycle. Following the example of biological photosynthesis, we have developed the consecutive photoinduced electron transfer (conPET) technique using perylene bisimide (PDI) and Rhodamine 6G or anthraquinones as photoredox catalysts. This strategy makes it possible to activate aryl iodides, bromides and even chlorides [5-7]. Over the same period, the groups of Goez, Kerzig and Wenger pioneered the area of photocatalytic activation of stable C-Cl bonds by reporting multiple systems for the activation of various water-soluble chlorides via the generation of solvated electrons [8-11] or triplet-triplet annihilation upconversion in aqueous solutions [12]. The authors proved that the interfacial film formed by sodium dodecyl sulfate (SDS) stabilizes the reduced form of the photocatalyst by suppressing the back-electron-transfer to the sacrificial electron donor. Despite the tremendous importance of all these aforementioned methods, the problem of the activation of stable, hydrophobic alkyl chlorides has still remained unsolved.

The design of the photocatalytic system

To address this long-standing challenge we have now developed the assembly-promoted single electron-transfer (APSET) strategy, in which the reacting species are compartmentalized in a microheterogenous, aqueous solution (Fig. 1) [13]. We hypothesized that in the presence of surfactant, aqueous micellar solutions should form, with organic substrates internalized inside the core of the micelle and the photocatalytic iridium complex immobilized non-covalently on the charged surface. 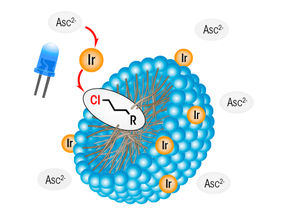 To assess the spectroscopic properties of the designed solution, time‑dependent UV-VIS absorption of Ir(dtbby)(ppy)2PF6 was measured in aqueous sodium lauryl oligoethylene glycol sulfate (SLES), in the presence of L-ascorbate as sacrificial electron donor and under blue light irradiation. The stability of the reduced photocatalyst (determined through monitoring of the characteristic absorption band at 533 nm) was compared to that of commonly used, organic solvent solutions. The use of a water/surfactant mixture was found to increase the lifetime of the [Ir(dtbby)·−(ppy)2] complex. It was present in the solution for hours, as opposed to other solvents, where fast decay was observed. Such stabilization is of great importance: it increases the chance for consecutive excitation with another visible-light photon and the generation of reactive species of sufficient reducing power. 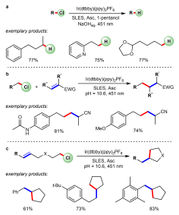 Fig. 2 The synthetic scope of the developed method

Using micelles as the reaction environment should provide not only solubilization of the alkyl chlorides, but also a favorable pre-aggregation in space with the hydrophilic chlorine atoms pointing towards the surface of the micelle. Such close proximity to the photocatalyst facilitates the single electron-transfer (SET) and in consequence, enables the generation of alkyl radicals. After careful optimization of the reaction conditions we applied this concept in radical dehalogenation, addition and cyclization reactions, obtaining the desired products in moderate to very good yields (Fig. 2). Despite the strongly reducing conditions and the basic environment, our method allowed for transformations of substrates possessing various functional groups, including substituted anisole, heteroaromatic ring, acetal function, protected amine as well as CO2H and OH groups. In addition to alkyl chlorides, the activation of stable chlorobenzene was also achieved.

The solubility of alkyl chlorides in the developed mixtures was further confirmed by dynamic light scattering measurements, which proved the presence of micelles with a size of two nanometers. In the case of intermolecular coupling, they additionally indicated a pre-association of starting materials: alkyl chloride molecules are incorporated inside the micelle shell, but remain in short distance to the olefin, which is located close to the interface. 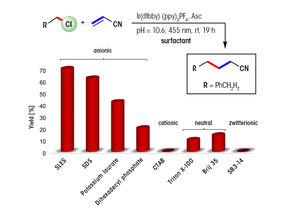 Fig. 3 The influence of surfactant on the intermolecular coupling yield

In order to better understand the influence of the nanostructuring on the catalytic reaction, we varied the type of surfactants (Fig. 3). Although cationic and zwitterionic surfactants form microheterogeneities, the desired reaction did not proceed. For the neutral ones, Triton X-100 and Brij‑35, only low yields were observed. In contrast, anionic surfactants favor the reaction, with sulphate groups being the most efficient. When compiled with the fact that only cationic iridium complexes were competent catalysts, this result strongly supports the hypothesis of the stabilizing effect of the micelle’s surface. Further mechanistic studies proved that the desired C-H and C-C bond forming reactions are of radical character. Importantly, the “dark experiment” showed that the reaction does not proceed in the presence of ground state [Ir(dtbby)·−(ppy)2]. This observation further confirms that the catalytic activity stems from the consecutive absorption of two photons in one photocatalytic cycle.

In summary, we investigated and optimized structured solutions in order to achieve the required assembly of hydrophobic reaction components and tune the activity of the photocatalytic system. The improved stability of the reduced Ir-photocatalyst allowed for engaging non-activated alkyl chlorides in radical dehalogenation, addition as well as cyclization reactions. The developed method is operationally simple and utilizes standard, cheap and commercially available blue light LEDs. Mechanistic investigations suggest that the reaction utilizes the energy of two blue-light photons in a conPET manner. We believe that these results pave the way for further applications of non-activated chlorides as alkyl radical-source for organic synthesis.

Weighing is one of the most common activities carried out in the laboratory. An electronic balance does not directly measure a mass, rather the force (…)