In recent years, microcomputed tomography (μCT) has become a standard method in many medical, scientific and industrial fields. This non-invasive technique enables three-dimensional imaging of a wide variety of structures. However, a new combination of methods now makes it possible to visualize even the finest of surface structures.

Computed tomography is a computer-assisted technique that uses X-rays to generate a three-dimensional image of a sample without destroying it. Various fields of research rely on it. In biology, for example, the technique is widely used to examine the appearance of extant [1] and fossil organisms [2] of all sizes and to perform biomechanical analyses on animals as different as dinosaurs and insects [3, 4]. Examples of application include the investigation of cracks in rock samples in geological sciences [5], the infiltration of samples by vapor in material sciences, and the identification of reasons for knee prostheses to fail [6] – the list of examples is almost endless. 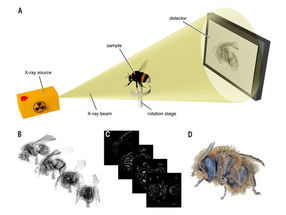 Fig. 1 Workflow from the CT scan to the 3D model. First, the specimen, in this case a bumblebee, is mounted on a rotating stage and scanned over a long series of rotation steps (A). At each rotation step a transmission image (tomogram) is saved (B). From all the tomograms taken together, digital cross-sectional images are backprojected (C), allowing a detailed 3D model to be reconstructed (D).

Micro-CT systems (µCT) are ideally suited for smaller samples, with resolutions of less than one micrometer achievable. Unlike the systems commonly used in hospitals, the sample is rotated around itself while the X-ray source and the X-ray detector do not move, which reduces vibrations and allows sharper images to be generated (Fig. 1A). In addition, the focus of the electron beam that hits the X-ray source is higher, which also leads to sharper images. While the sample rotates in the scanning chamber, the detector takes X-ray images (“projections” or “tomograms”). For a scan of sufficient quality, more than 1,000 such tomograms are often made and stored (Fig. 1B). A software solution reconstructs virtual cross-sectional images (so-called “backprojections”) which, when superimposed, yield a three-dimensional representation of the sample (Fig. 1C). This stack of images allows various structures of interest to be examined in detail and a three-dimensional model reconstructed for further analysis (Fig. 1D). The quality of a backprojection depends on how much X-ray radiation the different materials absorb during tomography, and this results in varying shades of gray in the tomographic images. Bones, for example, absorb a relatively large amount of X-ray radiation and appear very clearly in the scans, whereas the surrounding soft tissues, such as muscles, nerves and glands, absorb much less and therefore appear less pronounced.

To improve the imaging of such less absorbent structures, which often appear unclear or not at all in the scans, a variety of methods have been used that are all based on chemical solutions penetrating the specimen. Certain, highly X-ray absorbing molecules in the solutions accumulate in different concentrations in the various tissues and thus increase the contrast of the generated images [7, 8]. However, such methods have so far not been able to specifically increase the contrast of many fine and delicate structures on the surface of specimens. This is because such structures often absorb hardly any of the contrast solution or, as in the case of feathers, hairs and spider silk, their structure and orientation are distorted or destroyed by the liquids. This is why a three-dimensional reconstruction and investigation of such structures has been difficult or even impossible.

A layer of gold to enhance contrast 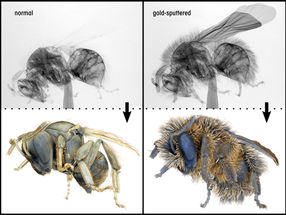 Fig. 2 Tomograms (top two images) and surface reconstructions (bottom two images) of a red-tailed bumblebee (Bombus lapidarius (Linnaeus, 1758)). The two images on the left show the specimen before gold treatment, whereas the two on the right show the effect of contrast enhancement by applying a gold layer. Especially the wings and the hairs that cover the body’s entire surface now become clearly visible.

This issue has now been resolved. A method that is long established in electron microscopy, the so-called sputtering, can selectively increase the surface contrast of samples. Sputtering exposes the sample to gold plasma in a vacuum chamber. Within a short period of time, the plasma deposits a layer of gold atoms only a few nanometers thick on the sample, which is otherwise unaffected. While in scanning electron microscopy, a gold layer is used to dissipate electrical charges during the microscopy process, the new method termed “Chryso-CT” (after “chrysos”, the ancient Greek word for gold) makes use of the gold layer’s high X-ray absorption capability [9, 10]. Since the thin gold layer on the surface of a sputtered sample absorbs a lot of X-ray radiation, the gold-coated surfaces appear much clearer in the tomograms, thus paving the way for the three-dimensional examination of the structures that have often remained invisible in X-ray imaging (Fig. 2).

Fig. 3 Virtual cross-sectional images of the pedipalp (mouthpart of a spider) of the spider Artema nephilit (Aharon, Huber & Gavish-Regev, 2017). While the contrast of the outer cuticle increases due to the gold treatment, the inner morphology of the specimen remains the same (B). This allows a fast, gray value based 3D reconstruction of the outer cuticle to be generated, separate from the inner muscles (C). Scale bar: 0.5 mm.

The surface and the inner structures of samples often possess similar contrast values and therefore result in similar gray shades in the scan. This becomes apparent in Fig. 3A: in the backprojections of a spider’s head, there is no difference in brightness between the outer cuticle and the muscles of the interior. It would be difficult and very cumbersome to manually extract the outer cuticle and the musculature as separate 3D models. However, if the sample is sputtered, the thin gold layer deposits exclusively on the surface, increasing the contrast of the outer cuticle while the sample’s interior remains unchanged (Fig. 3B). This selective increase in surface contrast, therefore, allows separate 3D models of the cuticle and the inner musculature to be automatically and rapidly extracted, based exclusively on gray values (Fig. 3C).

This combination of two established and widely used methods now allows such delicate biological structures as feathers, insect wings and even spider silk, which tomographies could previously represent only indistinctly at best, to be visualized. There are many other potential applications. Surface details of various non-biological samples in the material sciences and in quality control that have so far been permeable to X-ray radiation can now be examined and evaluated. The combined method also gives museums the opportunity to rapidly make tiny but fascinating specimens and phenomena visible to the public in 3D, for example the three-dimensional structure of insect wings, the branching pattern of spider webs, the hook structures of bird feathers or the morphology of a dandelion seed.