The traceability of measurement results

Metrological traceability is necessary for consistent, comparable and valid measurement values. As a fundamental concept of modern-day metrology, it allows measurement results to be internationally recognized and is required by norms and accreditation standards all over the world. The traceability of measurement results also carries significance for business and liability issues. So it is worth knowing its most important advantages and being able to estimate the consequences of a loss of traceability.

A QC laboratory’s gravimetric determination of a substance’s concentration in a production lot is meaningful for the release of the produced batch, even if different measurement instruments are used. For a business it is appropriate to measure a property of incoming goods delivered by a supplier who had earlier measured the property using completely different equipment. Temperature recordings made 100 years ago, when compared with today’s data, allow us to postulate a global, long-term trend in climate change (see [1, 2]). If a ton of steel is ordered in the southern hemisphere, it is still a ton of steel when it arrives in Europe. And when we buy a kilogram of sugar, our kitchen scales will reliably show one kilogram. Behind all these typical observations are the concepts of metrology, the “science of measurement and its application”.

Measuring correctly is fundamentally important for economies, civil societies and the world of technology and science. Accurate measurements are a central component of quality assurance. Measurement data are used to prove manufacturing standards and the quality, properties and functions of products, processes or services. Quality requirements in sensitive areas such as health, nutrition or the natural environment are regulated and checked at national level by the legislator and require regulatory conformity. A globalized world needs a universal metrology system with internationally agreed requirements for measurement methods, instruments and conditions, and that includes test procedures and certifications.

This is the task that the international, national and regional metrology organizations fulfil. The national metrology institutes (NMIs) or the International Organization of Legal Metrology (OIML) have concluded agreements to mutually recognize calibrations, conformity assessments and certificates: the CIPM MRA (Comité Internationale des Poids et Mesures Mutual Recognition Arrangement) and the OIML MAA (Organisation Internationale de Metrologie Légale Mutual Acceptance Arrangement). With the ILAC MRA (International Laboratory Accreditation Cooperation Mutual Recognition Arrangement) the ILAC regulates the mutual recognition of accredited services. Traceability – as well measurement uncertainty, which is closely related – is fundamental in these and must be assured. 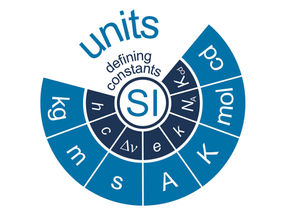 Fig. 1 In the new International System of Units (SI), the basic units as well as the derived units are determined on the basis of the fixed values of seven selected natural constants. Source: BIPM, Creative Commons License CC BY-ND 4.0

The basis for the way we measure today was laid at the time of the French Revolution, in response to demands for universal measurement units, with meters and kilograms being so important that they were defined first. This helped to finally put trade on a common basis (also see [3]). In the Meter Convention, which was signed in Paris in 1875, the then 17 leading industrial nations finally decided to introduce an international, universal system of measurements based on meters (m), kilograms (kg) and seconds (s). Within the framework of this treaty, the central institutions for international metrology were established, with the International Bureau of Weights and Measures (BIPM, French: Bureau International des Poids et Mesures) in Sèvre near Paris becoming the scientific center of metrology. In 1960, the SI, the International System of Units (Système International d'Unités), was introduced, in which seven units are defined today. Since its momentous recent revision, which came into effect on 20 May 2019, the anniversary of the signing of the Meter Convention, all SI units have been based on fixed values of universal natural constants [4] (see Fig. 1). As of 13 January 2020, 62 countries are full members and 40 countries associate members of the Meter Convention (see [5]).

With the introduction of the metric system in France, meters and kilograms in the form of metal artifacts were produced as globally valid references. Copies of these were distributed to the signatory states of the Meter Convention to serve as so-called national standards, with the purpose of serving as references for lower-level standards. The system devised at that time stipulates that the “relation” of the copies to the reference is determined metrologically by means of comparative measurements. This procedure is called “calibration”. When tracing back to SI units, which has become common practice, the measured value must refer to natural constants since the recent SI revision. So with the new SI in place, the last remaining artefact, the international prototype kilogram, has become obsolete.

A complete calibration consists of the deviation value (what a measurement instrument indicates or the value of a material measure) from the measurand’s correct value (by convention) and of a measurement uncertainty. The measurement uncertainty is a numerical value that describes the grade or quality of the calibration value and is defined in the International Vocabulary of Metrology (VIM) as a “non-negative parameter characterizing the dispersion of the quantity values being attributed to a measurand, based on the information used”. [6] 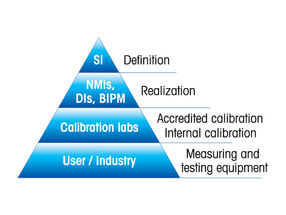 With the new SI coming into force, the natural constants that define the units stand at the top of a calibration hierarchy. The SI definitions are realized by primary methods, which can be performed by NMIs, Designated Institutes (DIs), the BIPM or collaborations among these. The derived so-called primary standards can then be used to calibrate other standards (secondary standards), and these in turn to calibrate further, tertiary or lower-level standards, eventually reaching the working standard used in routine measurements. By using the calibration value describing the relation to the original reference, the secondary and lower-level standards will also be related to the original reference. At each calibration step, the calibration value is calculated using the calibration data of the reference. Each calibration step generates additional uncertainties that are added to the uncertainty inherited from the previous step. For traceability, this results in a hierarchy with ever increasing uncertainties. This is often represented by a pyramid or triangle (see Fig. 2).

The information of the defining reference is passed on via accredited laboratories, ultimately to the industrially manufactured measurement instrument. If all countries base their calibrations on a common reference, all calibrations worldwide will be consistent with that reference within the stated uncertainties and therefore consistent with each other.

“Property of a measurement result whereby the result can be related to a reference through a documented unbroken chain of calibrations, each contributing to the measurement uncertainty” [6]. 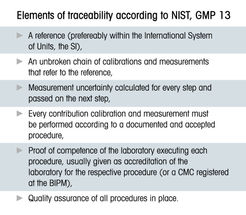 Fig. 3 Metrological traceability is characterized by several essential elements, such as those listed in the GMP 13 guidelines of NIST, the national metrology institute of the USA. Source: NIST GMP 13 [7]

The preferred reference system is the well-established “International System of Units (SI)”. Other references can be agreed between partners, but this is uncommon. For the sake of clarity, the full term would therefore be: “Metrological traceability to the SI”. It is important to note that metrological traceability should not be confused with, for example, sample or data traceability, which refer to the documented historical course of an entire process (“requirements traceability”). The elements necessary to realize and maintain metrological traceability are summarized in the GMP 13 guidelines of NIST, the national metrology institute of the USA, see Figure 3 [7].

The fact that the SI underwent a major transformation in 2019 did not affect the consistency of results over time. The changes were made with care to ensure that the historical equivalence of results reaches as far as possible. (There was a tiny hike in the results of the electrical measurands on 20 May 2019, but it was extremely small and will prove irrelevant in almost all cases [8].) This also explains the above-mentioned example of historical climate data: the temperature data were recorded with reference to the definition of the temperature in degrees centigrade (°C), which in turn possesses a well-defined relation to the SI unit “Kelvin”. The redefinition of the Kelvin in 2019 proved absolutely seamless, ensuring perfect continuity with climate observations and the corresponding records dating back to the 18th century.

The need for recalibration

All measuring equipment changes over time due to environmental influences or its use. For this reason, and from the point of view of continuous quality assurance, it is necessary to repeat calibrations according to an agreed procedure, and to update the values. The recalibrations are used to look back on the last period and to start the following one.

Recalibration after a certain period of use delivers important information about whether, and to what extent, the measuring equipment has changed. It is particularly important to assess whether any change may have led to a “loss of traceability”. This would be the case, for example, if two successive calibration results were inconsistent with each other. This information is important for the quality assurance of all measurement results. It is obvious that for this purpose, the measuring equipment must be calibrated without any changes to its behavior. This is called an “as-found calibration”. A proven loss of traceability may lead to the need for a product recall if there is a risk that non-conformal products have been delivered as a consequence of incorrect measurements.

Maintaining traceability: the start of the new period

“Game over” for the Paris kilogram

For about 200 years, any mass given in kilograms, grams and micrograms referred to a defined artifact accessible in only a single location on earth. A small metal cylinder had represented (…)

Metrological Traceability is the fundamental concept of all modern measurements. (…)