A catalyst with high selectivity for converting organolithium compounds

For the first time, an efficient catalyst for palladium-catalyzed C–C bonding between aryl chlorides and alkyl lithium compounds has been found. This reaction enables simpler synthesis routes for important products, such as pharmaceuticals, while avoiding much salt waste. The reaction is made possible by a new class of electron-rich ligands, the ylide-substituted phosphanes.

Transition metal catalyzed cross-coupling reactions are an integral part of modern synthesis chemistry. Under mild conditions they help to selectively bond carbon with a multitude of other atoms. These reactions are widely used in both academic and industrial research to synthesize complex molecules. Many products of everyday life, such as pharmaceuticals, pesticides or plastics, are based on such reactions [1, 2].

Coupling reactions have undergone a rapid development in the past decades. At first, such reactions required high temperatures and large amounts of the often expensive transition metal, while being able to couple only certain substrates. These problems were overcome by the development of new ligands. Such ligands can be used to control the steric and electrical properties of the metal in order to increase the activity of the catalyst and suppress side reactions. Nowadays, there are tailor-made ligands for almost every conceivable transition metal catalyzed reaction. They provide high conversion rates under mild conditions while using low quantities of catalyst [3, 4, 5].

Despite these advances, there are still substrates for which no suitable catalysts exist. For example, in palladium-catalyzed cross-couplings, such as the Suzuki, Kumada or Buchwald-Hartwig couplings, aryl chlorides are often much less reactive substrates than aryl bromides or aryl iodides and therefore require higher temperatures or higher amounts of catalyst. This is unfortunate because aryl chlorides are often less costly and synthetically more accessible. Therefore, metal complexes that can effectively couple such substrates are of particular interest. 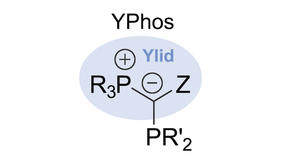 For several years now, our research group has been working on a new class of very electron-rich and sterically demanding ligands, the ylide-substituted phosphanes (Fig. 1) [6]. Due to having a ylide group attached to the phosphane, these ligands possess particularly strong donor properties and can therefore stabilize the catalytically active palladium(0) species and, in addition, add aryl chlorides oxidatively, even at low temperatures. We have already shown that these metal complexes are highly active catalysts for the α-arylation of ketones and the Buchwald-Hartwig amination [7, 8]. Based on these successes, we wanted to find out whether these ligands could also be used for other, more demanding conversions. 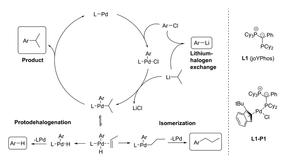 Fig. 2 Reaction mechanism and possible by-products (left); the structure of the ligand L1 and the precatalyst L1-P1 (right)

The direct, palladium-catalyzed coupling of aryl halides with lithium organyls is a demanding reaction of this kind. In contrast to other C–C bonding reactions, such as the Stille or Suzuki coupling, only small amounts of lithium salts result as waste products because no additional conversion is required. Another advantage is that lithium compounds are often easy to synthesize or available for purchase. However, organolithium compounds are extremely reactive and break down most transition metal complexes very quickly. They also enter into lithium-halogen exchanges with their coupling partner, the aryl halides, which subsequently creates further by-products. Furthermore, a β-hydride elimination can occur during the reaction, leading to additional side reactions. The isomers formed in this process are particularly difficult to separate from the desired product and should therefore be avoided if possible (Fig. 2).

In recent years, intensive research has been performed on this reaction. As one of the results, suitable catalyst systems for coupling aryl bromides with both aryl lithium compounds and primary or secondary alkyl lithium compounds were found [9,10]. For aryl chlorides, however, the reaction is much less wide-ranging: only aryl or alkenyl lithium compounds could be converted effectively [11,12]. The reason for this is that the oxidative addition to the palladium center proceeds much slower for aryl chlorides, and therefore more side reactions can occur. We therefore assumed that this problem could be solved by using palladium complexes of ylide-substituted phosphanes.

After optimizing the reaction conditions it was shown that a combination of the ligand L1(joYPhos) and Pd2(dba)3 is able to couple even electron-rich aryl chlorides with primary and secondary alkyl lithium reagents [13]. The reactions proved selective and resulted in only few by-products; in the case of the secondary alkyl lithium reagents only small amounts of the isomerized product were observed. A comparison with other catalysts known from literature showed that only the ylide-substituted phosphanes achieved high conversion rates and selectivities. It could also be shown that not only a combination of the ligand and a palladium source can be used, but also preformed ligand-palladium complexes such as L1-P1 (Fig. 2) [14]. Such precatalysts are user-friendly because they are stable in air and only one compound needs to be weighed and added to the reaction. 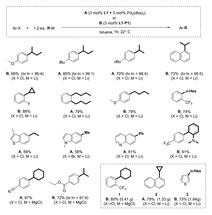 After optimizing the catalysis conditions, we investigated the substrate spectrum of this reaction (Fig. 3). In addition to various alkyl lithium compounds, it proved possible to successfully couple aryl lithium compounds. These could also be produced by direct lithiation of substituted aromatics, making it possible to synthesize complex biaryls from simple precursors. Successful reactions with alkyl and aryl Grignard compounds also showed that the metal complexes are suitable catalysts for Kumada coupling. For tertiary alkyl lithium or Grignard compounds, however, complete isomerization was observed. Both electron-poor and electron-rich aryl chlorides and heteroaryl chlorides could be coupled, and aryl bromides could also be converted effectively. The substitution pattern of the aryl halide had little influence on the reaction behavior, and even aryls with sterically demanding ortho-substituents could be used as substrates.

Fortunately, our catalyst system also proved excellently suited for producing industrially relevant products. Compounds 1 and 2, which are intermediates in the production of the drugs siponimod and lesinurad, as well as compound 3, a monomer for producing organic semiconductors, could be synthesized in single-step reactions (Fig. 3). The latter two compounds could also be synthesized in quantities of more than one gram. These new synthesis routes required fewer steps and produced less salt waste than with the known protocols described in the literature.

In summary, we were able to develop a catalyst system for coupling aryl chlorides with alkyl lithium reagents. It is based on using electron-rich ylide-substituted phosphanes and is the first catalyst system that can provide these coupling products in good yields and with high selectivities. Furthermore, the catalyst system has a wide range of applications and is also effective in Kumada couplings. The reason for the superior performance is the rapid oxidative addition of the aryl chloride to the metal center, thereby preventing side reactions such as lithium-halogen exchanges. The wide spectrum of potential applications was demonstrated on a large variety of substrates, including ortho-substituted arenes and heteroaromatics, and is also possible in a gram scale. The potential of the developed reaction protocol could be demonstrated by the synthesis of three compounds relevant to industry and pharma.