Immune-responsive human tissue models for the development of immunomodulatory drugs

Innate immunity is a central component of the human immune defense. Pattern recognition receptors (PRRs), such as the toll-like receptors (TLRs), play a key role in this system. They are omnipresent in nature and found in plants, insects, vertebrates and human beings.

The function of TLRs in the immune defense against pathogens was originally identified in Drosophila flies [1]. Today, they are universally accepted to be immune receptors with a variety of functions, from recognizing pathogens and damaged endogenous cells to functions in eliminating cancer cells. However, misregulation in innate immunity can have serious consequences for those affected. This is the case with, for example, autoimmune diseases, such as rheumatoid arthritis, psoriasis or inflammatory bowel diseases. The crucial role of TLRs in the defense against pathogens and in inflammatory processes have made them drug targets for various indications, in the hope of paving the way for a variety of drugs, from anti-infectives to adjuvants and tumor therapeutics [2].

A fundamental problem in the development of immunomodulators as therapeutics is that the human immune system is different to that of animal models commonly used in drug research. Such differences lead to limited success rates in clinical studies and, in the worst case, can lead to negative effects on test persons. The development of more than half of all therapeutic candidates approved for clinical trials is discontinued within the first two clinical phases. Almost 60 % of these fail due to a lack of efficacy, and about 20 % due to side effects [3, 4]. Therefore, efforts are increasing to develop models based on human in vitro or ex vivo systems that better reflect the reactions of the human immune system to new drugs than the animal models in use today.

Fig. 1 Structure of the immune-responsive skin model. The skin model consists of three layers, allowing each layer and thus each introduced cell type to be analyzed separately. The top layer consists of keratinocytes from biopsies or immortalized primary cells (with or without a reporter gene). The middle layer consists of a collagen matrix into which dermal fibroblasts are embedded. Like the keratinocytes, these fibroblasts are derived from biopsies or consist of immortalized primary cells that can carry reporter genes. This allows patient-specific skin models to be created ex vivo, and also reproducible (reporting) skin models for drug screening or analytical studies under constant conditions. By additionally integrating immune cells subdermally into a further collagen layer matrix, the skin model becomes immune-responsive. From blood to purified, specifically activated immune cells, this paves the way for a multitude of possibilities to analyze cell-cell interactions.

Fraunhofer IGB’s innovation field Cell and Tissue Technologies, headed by Dr. Burger-Kentischer, has been working for many years on immune receptors and immune-responsive tissue models that are able to imitate human autoimmune reactions and infections in vitro. By combining molecular biology and cell biology techniques, tissue models with an immune response have been established. To create them, a variety of cell types were used, all equipped with easily readable, relevant reporter functions. These cells can be combined like modules to create different model systems for different tasks. Primary cells from biopsy material can be used to analyze patient specific traits, whereas immortalized primary cells are used to ensure that the tissue models are reproducible and without donor variability. To get such a modular system to work, cell-based reporter systems for the detection of TLR modulators had to be established first [5]. These reporter systems are suitable for high throughput and are used to detect pyrogens in medical technology and pharmaceuticals and to screen for immune modulators in API discovery [6, 7].

Reporter systems like these have already been integrated into more complex test systems such as 3D skin models. These skin models are fabricated with the help of a collagen matrix, into which the fibroblasts (with or without a reporter gene) are embedded. Then the keratinocytes are applied to this matrix. A reporting skin model of this basic composition can subsequently be reproduced and used to test chemicals, allergens and cosmetics or for drug development purposes [Patent Burger-Kentischer EP 2795318 B1]. It allows TLR receptor mediated reactions to be captured by reporters quickly and in higher throughput.

An immune-responsive skin model was created by integrating immune cells into the skin model described  above and subsequently used as an infection model. In addition to the keratinocytes and dermal fibroblasts, mixtures of immune cells or specifically differentiated immune cell populations can be integrated subdermally, like with a modular system [8]. The three layers of the skin model are clearly distinguishable in Figure 1 and can be separated and examined separately after the experiment. 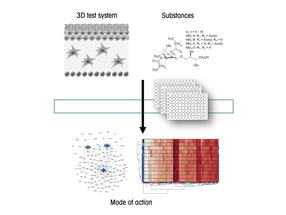 Fig. 2 Molecular analysis: Because the individual layers of the model can be analyzed separately, so can the transcriptome profiles of the individual cell types of each layer. This makes it possible to examine the interaction of the cells via messenger substances, such as cytokines, in the presence of active substances or pathogens. Hence, the mechanisms of action of new drug candidates can be identified in tissue models that mimic a human immune response.

The immune-responsive skin model clearly showed a protective response against infections with Candida albicans, a pathogenic fungus, as is also the case in healthy individuals [9]. In the presence of immune cells, the fungus hardly penetrated the tissue model (Fig. 2). The high-throughput sequencing technology that Fraunhofer IGB’s innovation field In-vitro Diagnostics established under Dr. Sohn helped to perform detailed analyses of the transcriptome of individual cell types and the pathogen C. albicans in the infection model (Fig. 3). These analyses provided decisive information about the defense mechanism against the pathogen. The data analysis showed that it is the dermal fibroblasts that cause the antimicrobial activity in this system. They secrete a multitude of antimicrobial peptides and chemokines that stop C. albicans from invading the tissue. In response, the transcriptional profile of the pathogen showed a strong stress response, but only in the presence of immune cells. The immune cells are essential for initiating the antimicrobial activity of the fibroblasts. This is achieved by activating a cytokine, IL-1β, which is necessary for the release of the antimicrobial peptides. We could demonstrate that TLR-receptors and their signaling pathways are essential for the observed intracellular communication [9]. 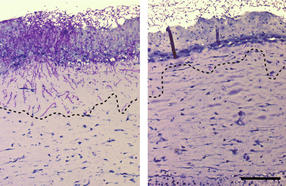 This immune-responsive infection model of the skin allowed the effects of a number of TLR agonists and antagonists to be examined. As part of the InfectE project InnateFun, and as a first step, immunomodulators were identified by computer-based methods (Hebrew University, Fraunhofer Project Center for Drug Discovery and Delivery). These were tested for efficacy against TLR4, TLR7 and TLR9 in the above mentioned, cell-based reporter systems. A selection of the substances that tested positive in these assays were then brought into direct contact with immune cells from blood and with immune-responsive skin models. This revealed significant differences between the effects of the immunomodulators used. While the TLR7/TLR9 inhibitors showed no effect in the skin model when infected with C. albicans, they were able to reduce the cytokine release after activation of the TLRs in blood. The TLR4 inhibitors proved to be active in both the blood samples and the infection model. This shows that TLR4 plays an essential role in the activation of the skin's immune response to invasive fungal infections, whereas TLR7/TLR9 do not.

The project partners at the Universities of Vienna and Leuven were able to obtain further data from a mouse model. These showed no acute toxicity for any of the investigated immunomodulators. Furthermore, for one of the TLR-modulators the survival rate of mice with systemic C. albicans infections was observed to improve. As a proof of concept, this shows that the identified TLR-modulators significantly influence the immune response to C. albicans infections in vitro, ex vivo and in animal models.

3D tissue models with immunological capabilities are still at the beginning of their development. However, progress in developing these models is rapid, so more and more reliable data will become available that can be used not only for the identification of basic mechanisms of an immune response but also for the preclinical validation of drugs in human tissue based disease models. This can contribute towards improving the approval rate of new drugs and accelerate their development.

The development of the immune-responsive skin models was made possible by funding from the program FP7-PEOPLE-2013-ITN – Marie-Curie Action: “Initial Training Networks”, within the framework of the project ImResFun – Molecular Mechanisms of Fungal Pathogen Host Interactions (Project ID: 606786), see https://www.igb.fraunhofer.de/en/reference-projects/identification-of-protective-mechanisms-.html. The identification of the TLR modulators was made possible by collaborations within the “Fraunhofer Project Center for Drug Discovery and Delivery at Hebrew University” and by funding from the BMBF within the InfectE project “Stimulating Innate Immunity to combat fungal infections – InnateFun” (https://www.innatefun.de).