Chlorogenic acids (CGAs) are, by definition, esters formed from hydroxycinnamic acids and quinic acid. As such, they are produced by almost all plant species as secondary metabolites. In our diet, we take up substantial amounts of this class of compounds – around 1 g per day, in extreme cases even up to 2 g. Plants from the Rosaceae family (apple, plum, apricot, etc.), the Asteraceae family (lettuce, artichoke, stevia, etc.), yerba mate tea and especially coffee are the main sources of CGAs in the human diet. A 200 ml cup of coffee contains approx. 200 mg of CGAs.

Over the past three decades, it emerged that this class of compounds harbors a number of benefits for human health [1]. As far as the plants themselves are concerned, it is assumed that the antibacterial and antiviral properties of these compounds as well as their often bitter and astringent taste evolved to protect the plants from predatory herbivores and serve as a defense mechanism. Numerous epidemiological and clinical studies show that CGAs have a moderate effect on cardiovascular health and slightly reduce the risk of developing cancer. Yet two other effects stand out: the acids’ effect on sugar metabolism, as well as their hepatoprotective effect. One single cup of coffee already contains enough CGAs to significantly lower a person’s blood sugar level, and people who drink coffee regularly are much less likely to develop type 2 diabetes or liver damage.

CGAs themselves have a low bioavailability, but they make for excellent substrates for gut bacteria and are converted into a series of bioavailable bacterial metabolites, which are probably responsible for the positive health effects. This subject merits much more research. 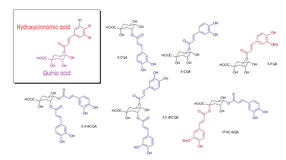 For me as a chemist, the chemistry of chlorogenic acids presents a delightfully tricky challenge due to the fact that linking quinic acid and cinnamic acids results in a multitude of possible isomer combinations. Quinic acid comprises four non-equivalent OH groups which can be combined with the cinnamic acid (most often caffeic acid, ferulic acid, sinapinic acid and p‑coumaric acid) to form four regioisomers. Creating two esters from the same cinnamic acid results in six regioisomers, while using two different acids results in twelve isomers. To make matters even more complicated, cinnamic acid exists as both a trans and a cis isomer (i.e. 12 or 24 combinations), and moreover, when coffee is roasted, the quinic acid epimerizes into six possible diastereomers [2] (now we already have 72 or 144 isomers). Figure 1 illustrates a small selection of substances.

Due to the fact that the structures of these isomers are highly diverse, it is critically important to use the correct nomenclature [3] developed by the IUPAC, especially since the community had been confused for years by the incorrect nomenclature used in Wikipedia articles.

In order to positively identify the vast majority of the derivatives, we use tandem mass spectrometry. (NMR spectroscopy is not suitable for this use case, because overlapping signals prevent structure elucidation.) In 2003, right after we acquired our first ion trap mass spectrometer, we were able to show that, surprisingly, the MS/MS spectra of the four regioisomeric caffeoylquinic acids are drastically different from one another [4], as are the MS2 and MS3 spectra of the diesters [5]. These can be used in a diagnostic and reliable manner as a tool for structure assignment. Spectra are recorded in the negative ion mode using electrospray ionization (ESI). Ion trap tandem MS spectra and Q‑TOF or triple quad tandem MS spectra differ slightly from one another, but can all be employed for structure elucidation. In our work, we provided an easy instruction manual for interpreting spectra, which we have termed “hierarchical key” and which has been successfully implemented by other research groups hundreds of times. In our later work, we described how to handle trans/cis isomers or diastereomers in tandem mass spectrometry [6]. Most of our work on this subject used authentic reference substances that were available through chemical synthesis.

When quantifying chlorogenic acids and dealing with difficult samples, we prefer to use phenyl-hexyl reversed-phase HPLC separation. Whenever possible, we carry out the quantification process using HPLC-UV spectroscopy with a cinnamic acid absorption of 320 nm. For some derivatives we have authentic standards (around 10 compounds are also commercially available). For different cinnamic acid variations, reliable relative response factors (RRF) are available for HPLC-UV quantification. Using this method, we can routinely quantify around 30 derivatives in coffee. In exceptional cases, we also employ HPLC-MS techniques to quantify minor components.

Because CGAs are so diverse, scientific literature on the subject offers wholly reliable data for these 30 main components. The overall number of minor components (around 220 further CGAs in roasted coffee) remains unknown. Over the past two years, we published two studies comparing different coffee products. For this purpose, we used multivariate statistical methods to compare the different sample groups. The data was created via UHPLC‑ESI and subsequently subjected to analysis using the PCA and PLS‑DA methods. Absolute quantification was conducted using HPLC-UV analysis. In the first study, we compared the CGAs found in Arabica and in Robusta coffee beans [7]. In the score plots, Robusta and Arabica coffee are easily distinguished. The loading plot delivers the respective biomarkers responsible for the distinction. Robusta coffee contains higher levels of diacyl CGAs. Furthermore, Robusta coffee contains CGAs with trihydroxylated cinammic acids such as sinapinic acid, which are not present in Arabica beans. Figure 2 depicts selected box plots that directly compare the concentration levels. These compounds could therefore potentially serve as an alternative to the established 16‑O‑methylcafestol analysis method [8] when identifying adulterations in Robusta coffee. Using the methods described above, we subsequently quantified the most important derivatives.

Fig. 3 PLS-DA (partial least square discriminant analysis) to compare conventionally cultivated coffee (green dots) to organic coffee (red dots) in the score plot (left) and the most important feature plot (right), which shows the most important biomarkers for the distinction [9]

In a second study, we collaborated with Daniel Granato to compare organic Brazilian coffee with conventionally cultivated coffee [9]. By comparing a total of 67 samples, we were able to observe a lower concentration of CGAs in the organic coffee (statistically significant average). Figure 3 illustrates a PLS‑DA analysis that allows for a comparison between organic coffee and conventional coffee, as well as a most important feature plot used to distinguish between the most important biomarkers. This leads us to draw either the proactive, press-effective conclusion that conventional coffee is healthier, since it contains more healthy chlorogenic acids, or the much more sensible conclusion that consumers who prefer organic coffee should instead drink an extra cup in order to ingest the same level of CGAs.