Many drug candidates never reach clinical use due to their side effects. For example, inhibitors of phosphoinositide 3-kinase-γ, a signaling protein that plays an important role in infections, cannot be used because of their side effects on the immune response. However, new forms of administration to make a drug reach only a specific organ allow these unwanted effects to be circumvented.

Taking medication does not always lead to the desired effects. Often enough, the list of side effects is long. For approved drugs, these are negligible or at least tolerable in relation to the therapeutic benefits. However, side effects can be so severe that a promising active pharmaceutical ingredient (API) cannot be used for therapy because the negative effects counteract or even outweigh the positive ones. One reason for this is that an API can have different effects in different cells, tissues and regions of the body. To solve this problem and to make new APIs therapeutically usable, research is being conducted on targeted forms of administration that release the APIs only at a targeted site within the body.

Fig. 1 Biophotonic tracking of nanoformulated PI3Kγ inhibitors in the liver. The fluorescent dye DY-635, bound on the surface of the nanoparticles, reveals the transportation system for AS605240. DY-635 also directs the nanoparticles to liver cells. Mesoscopy, which visualizes organs macroscopically, reveals a high level of accumulation in liver tissue (top). Microscopic, time-resolved imaging of the tissue (bottom) shows the uptake of the nanoparticles from the capillaries of the liver into the hepatocytes within an hour, and the excretion of the dye into the bile canaliculi.

Treating organ failure, for example of the lungs, kidneys or liver, is the core task of intensive care medicine. Infections tend to be the most common cause of organ failure in an ICU. They can lead to sepsis, a life-threatening organ dysfunction caused by a patient’s dysregulated response to an infection [1]. Organ failure is thus what distinguishes sepsis from uncomplicated infections. With over 280,000 new cases per year in Germany alone and a death rate of approximately 30%, sepsis currently ranks third in the mortality statistics, behind only cardiovascular diseases and tumors [2].

The presently available therapies for intensive care focus on eliminating the sepsis-causing pathogen, for example by administering antibiotics, or by symptomatically supporting the functioning of an organ by means of ventilation or dialysis, which gives the patient’s body more time to cope with the consequences of the infection itself. Approved pharmacological therapies that support the recovery of an organ’s functioning do not exist as yet [3], despite organ dysfunction being the decisive difference between sepsis and an uncomplicated infection. Severe liver dysfunction, although a relatively rare occurrence in sepsis, drastically reduces the chances of survival in the absence of therapeutic options, with a death rate of more than 90% over the year that follows diagnosis.

Targeted drug delivery as a lifeline 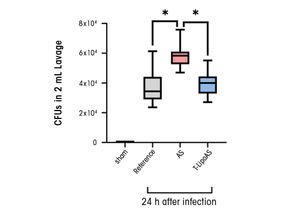 Fig. 2 Untargeted inhibition of PI3Kγ inhibits immune response and defense against the pathogens in sepsis. Bacterial load in the peritoneal cavity, the initial site of infection in this model, is commonly quantified in colony forming units (CFUs). A higher bacterial load than in a control group without infection (sham) indicates an immune dysfunction that results in the inability to properly fight the infection. This effect, relative to the infected control group (Reference), can be clearly observed in animals treated for sepsis with the conventionally formulated PI3Kγ inhibitor AS605240 (AS). The nanoformulation of AS for the targeted delivery of the inhibitor selectively to the liver (T-LipoAS) prevents the uptake into immune cells and thus immune dysfunction.

One reason for the lack of pharmacological therapies to restore an organ’s function is the overlapping roles of multifunctional signaling proteins in different cell types, for example of protein kinases in the immune system and in organ-specific tissue (parenchyma). One solution to this problem is developing targeted delivery systems. To make such approaches usable, there are three components to work on: the drug itself, its packaging and the targeted unit.

Preclinical research has yielded some promising drug candidates for the treatment of septic liver failure. One example is the compound AS605240, which inhibits one of the cell's central signaling proteins, phosphoinositide 3-kinase γ (PI3Kγ). This protein is involved in a variety of physiological processes. In sepsis, for example, it has been shown that activation of PI3Kγ leads to the deterioration of liver function and impaired bile production. Mice that lack the corresponding gene are less likely to suffer from liver failure during sepsis. However, some of their immune functions are disrupted because PI3Kγ is also important for directing immune cells to the site of infection, where they are supposed to eliminate the pathogen. So “knocking out” the protein by either genetic or pharmacological inhibition does not yield any benefits with regards to survival [4]. 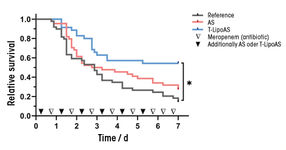 Fig. 3 Targeted inhibition of PI3Kγ in the liver improves organ function and survival in sepsis. Survival of mice in sepsis (Reference: infected control group) after administration of the conventionally formulated PI3Kγ inhibitor AS605240, whereby the enzyme is inhibited in all cells of the body (AS), or as a novel nanoformulation with selective targeting of hepatocytes (T-LipoAS). The nanoformulation leads to the resolution of organ dysfunction and improved survival in this sepsis model. All animals received adequate antibiotics and pain therapy, as well as liquids.

In order to exploit the promising effects of PI3Kγ inhibitors, ways must be found to carry the substances exclusively into the liver parenchyma without affecting the immune system. In Jena, the Collaborative Research Center SFB 1278 “PolyTarget”, which is funded by the German Research Foundation (DFG) (the second funding phase has recently commenced), has been working for several years on the development of nanoparticles that can package APIs for precisely this purpose. Nanoparticle libraries are now being developed from which suitable “containers” can be selected, depending on the intended area of application [5-9]. A successful approach also needs a vehicle that navigates the drug-loaded nanoparticles to their target. Different modifications allow the particles to be selectively taken up by specific cell types, upon which they release their drug substance. To navigate the particles, the dye DY-635 has been successfully used. It is selectively taken up by liver cells and certain tumor cells that express organo anion transporters (Fig.1) [10].

In an animal model, this innovative combinational approach has succeeded in transporting an API selectively to the desired site of action (Fig. 2), thus reducing liver failure and increasing the likelihood of surviving sepsis (Fig. 3). 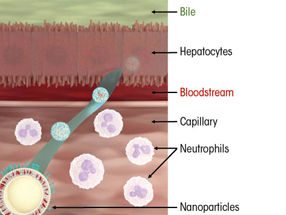 Fig. 4 Schematic summary. Drug-loaded nanoparticles are selectively taken up by liver cells (hepatocytes) through a “targeting unit” (sky blue) and release the API (red) there. The activity of the immune system, for example, is not affected.

The newly developed nanoparticles managed to transport the drug specifically into liver cells (Fig. 4), which improved liver function and, thus, the survival rate of the septic mice. The drastic side effects of the inhibitor on the immune system that the usual (systemic) form of administration cause were not observed when the nanoparticle-packaged drug was administered.

The authors thank Dr. Margit Leitner and Owe Leitner for preparing the illustration of the nanocarriers (Fig. 4 und header image).

Michael Bauer and Ulrich S. Schubert are founders and shareholders of SmartDyeLivery GmbH, which develops pharmaceuticals based on the described mode of action.

The Collaborative Research Center (SFB) 1278 “PolyTarget” in Jena (Germany) pursues the long-term objective of developing cell type specific polymeric nanoparticles (NP) that selectively intervene at different stages of inflammatory processes. Targets for NP treatment are the pathogens themselves or concurrently occurring, harmful inflammatory responses. Newly developed drugs encapsulated in tissue-specific NP can resolve local and systemic inflammatory responses and protect distant organs. PolyTarget covers the full spectrum of methods for the production and efficient application of cell type specific NPs, including synthesis of systematic polymer libraries, formulation of NP libraries, development of new anti-inflammatory drugs, modeling of drug-polymer interactions, and application of biomedical methods to test for NP efficacy. In addition to scientific projects, there is also a public outreach project that introduces PolyTarget's concepts and results to schools and a graduate school that specifically promotes interdisciplinary scientific expertise.