Detection and identification of vitamin D metabolites in plant sources

A vitamin is defined as an organic molecule essential for health. Indeed, vitamin D has been associated with bone health and with immune-related effects, however a vitamin D deficiency has been associated with chronic diseases and mortality [1]. The majority of vitamins can be acquired from food sources. It is, however, difficult to obtain the necessary vitamin D requirements from food alone, unless one lives in a country where many foods are fortified with vitamin D.

Vitamin D in humans is mostly acquired through dermal sun exposure, specifically when irradiation of 7-dehydrocholesterol (also known as provitamin D) in the epidermal skin cells occurs upon ultraviolet B (UVB) exposure. Western lifestyle trends are associated with limited sun exposure (e.g. sun avoidance due to risk of skin cancer, sedentary lifestyles etc.). Consequently, a deficit of the vitamin D status marker, 25-hydroxyvitamin D (25(OH)D) circulating in serum is commonly observed on a population level. For example, 40.4 % of Europeans are reported to have insufficient concentrations (defined as 25(OH)D < 20 ng/ml) [2]. Additionally, the winter months will often preclude the attainment of UVB-sourced vitamin D.

Nutritionists are strong advocates for using foods as sources of micronutrients (vitamins and minerals) because foods usually contain a variety of beneficial nutrients and it is precisely this synergistical nature of nutrients that offers abundant health benefits. Paradoxically, natural dietary sources of vitamin D are rather limited and found in what many would consider “not everyday foods” e.g. fish, eggs, mushrooms. The number of available foods fortified with vitamin D will greatly depend on the country of residence and is more common in the United States than it is in Europe. Thus, the risk of vitamin D deficiency is compounded by the fact that few dietary sources exist, and more specifically, dietary sources that can be incorporated into daily dietary practices for a constant supply of this vitamin. More so, the majority of sources appear to be of animal origin. Thus, the increasing number of people choosing to avoid animal produce and the rising global trend in vegetarians/vegans will mean limited sources are available with which to meet their vitamin D requirements. Given the current shift towards more sustainable nutrition, and the ever-increasing population levels, there is a need to identify more edible sources of vitamin D in order to meet physiological demands, and reduce the reliance on UVB exposure.

Vitamin D metabolism – are there parallels between humans and plants? 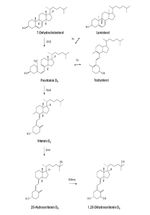 Fig. 1 The metabolism of vitamin D in humans

The metabolism of vitamin D is depicted in Figure 1. In humans, the newly synthesized vitamin D3 originating from sunlight, diets and supplements is transported to the liver tightly bound to vitamin D binding protein in the bloodstream. There the first of two hydroxylation steps occurs whereby 25(OH)D (vitamin D2 which originates from supplements or food also undergoes this hydroxylation in liver) is produced and is the status marker primarily used in research and clinical practice. The second hydroxylation occurs in the kidneys yielding the most active form of the vitamin D metabolites, 1,25-dihydroxyvitamin D (1,25(OH)2D). This active vitamin D metabolite binds to the vitamin D receptor (VDR) – a member of the nuclear receptor superfamily, which is ubiquitous in the human body. Interestingly, the leaves of two plants, Solanum malacoxylon [3] and Cestrum diurnum [4], have been shown to contain the two hydroxylated metabolites 25(OH)D3 and 1,25(OH)2D3 (in both free and glycosidic forms), in addition to 25-hydroxylase and 25-hydroxyvitamin1α-hydroxylase which are the enzymes required for these hydroxylation reactions. With regards the transport mechanisms of vitamin D binding protein, this has not been identified in plants, however a similar protein in a waxyleaf nightshade plant (Solanum glaucophyllum) has been identified for 1,25(OH)2D3 alluding to the possibility that similar mechanisms of action exist in plants too [5].

As previously mentioned, vitamin D is primarily synthesized upon UVB exposure. Vitamin D3 and the hydroxylated metabolites 25(OH)D3 and 1,25(OH)2D3 have been detected in leaves of the tomato plant, the waxyleaf nightshade and bell pepper plants after exposure to UV treatment [6]. Interestingly, Jäpelt and colleagues also detected the same metabolites in the leaves on the same plants when not exposed to UV treatment, and even in those plants when grown in darkness, as has been reported by others looking at the Solanum glaucophyllum plant [7-9]. Thus, there appear to be similarities to humans, in terms of requiring UV radiation to synthesize vitamin D but also discrepancies, where vitamin D is synthesized in some plants even in the absence of UV radiation. In the latter case, the added exposure to UV radiation serves to increase the current concentration of vitamin D metabolites. This parallels what we know about mushrooms, which even after being harvested, will continue to make vitamin D2, particularly when exposed to UV radiation [10].

The analytical methodologies for analyzing vitamin D and its metabolites in plants differ somewhat from their counterparts in the clinical chemistry world. In many applications, the goal of plant analysis is focused on the search for new plants containing vitamin D, while clinical assays mostly quantify specific vitamin D target metabolites. It is interesting here to contrast the clinical versus plant analytical challenges and the state-of-the-art of vitamin D analysis in both fields.

Clinical measurements have mostly focused on the accurate quantification of 25(OH)D as status marker, with sophisticated harmonization and standardization schemes in place that allow worldwide comparison of results. Furthermore, efforts have been made to retroactively validate vitamin D data from past studies by reanalyzing leftover samples and correcting results accordingly. Moreover, sophisticated analytical assays for simultaneously capturing multiple vitamin D metabolites based on mass spectrometry are now routinely used for studying the role of vitamin D in human health and disease [11,12].

The native vitamin D species on the other hand is not usually included in clinical vitamin D assays. With plants the situation is different, however, because vitamin D is usually the only species that is analyzed. Standardized methods for food exist for vitamin D, e.g. AOAC International: Cholecalciferol (vitamin D3) in selected foods [13], and such analytical protocols can be used as a basis for analysis of vitamin D in plants.

Differences in sample preparation for clinical and plant analyses

While the instrumental analysis parts of most vitamin D methods are very similar between clinical and plant analyses, the sample preparation step of the specimens to be analyzed usually differs significantly, because of the different physical states of the commonly analyzed samples (liquid serum/plasma versus solid plant material) and the binding of the vitamin D species to matrix material (protein-bound for clinical samples versus glycosylated/esterified/acetylated for plant material).

For plant materials, the active vitamin D species have to be released from the carrier material, e.g. by saponification and hydrolysis [14], similar to the protein-precipitation step for plasma/serum [15]. The released vitamin D compounds are then extracted, e.g. into non-polar organic solvents by using liquid/liquid extraction or by applying solid-phase extraction [6]. 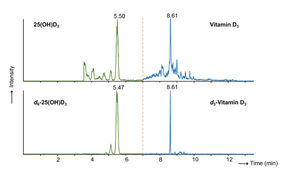 For instrumental analysis, GC-MS and HPLC-UV have been used historically, but much more sophisticated LC-MS/MS methodologies have entirely replaced these technologies in the clinical world, allowing multiple vitamin D species to be analyzed simultaneously with increased sensitivity and high specificity [11,12]. A similar trend is seen in plant analytical applications [16]. Figure 2 shows an example for the LC-MS/MS analysis of vitamin D in avocados.The frequently used clinical immunoassays for 25(OH)D and 1,25(OH)2D are less commonly applied in plant analysis.

LC-MS/MS methods for vitamin D have clearly shown their potential in recent years. Despite strong matrix effects, they exhibit high accuracy and precision by using stable isotope internal standards for calibration. There is a wide range of LC-MS/MS techniques available (e.g. ESI and APCI ionization), further allowing methods to be adapted to the studied plant material [1]. High resolution mass spectrometers such as orbitrap and TOF instruments are rapidly advancing into routine clinical laboratories and the same is expected in plant research.

The vitamin D metabolites have mainly been detected in the leaves of plants, particularly of the Solanaceae family. These leaves can be poisonous, and as such are not a viable plant source of vitamin D. It remains undetermined whether the fruits of edible plants, e.g. of the Solanaceae family, contain vitamin D. It should be further noted that the presence of the most active vitamin D metabolite, 1,25(OH)2D, can be toxic in large concentrations. Therefore, plant products with high levels of this metabolite would be unsuitable as human consumption. What does this mean for the potential of plant sources to provide vitamin D? We are far from understanding the bigger picture. We need further insights into the role vitamin D plays in plants. We know it has been detected in leaves of certain plants, but it remains to been seen whether the edible fruits also contain vitamin D, what the detectable levels of the different vitamin D metabolites in plants are, whether this would make them fit for human consumption, and what role UV light (or its absence) plays in the metabolism of vitamin D in plants. We look forward to finding more pieces to this puzzle.