Protein-rich meat alternatives made from fungi

Mycoprotein as an alternative, healthy source of protein

Protein-rich “mycoprotein” is a sustainable and biological food ingredient obtained by targeted fermentation of a starter culture. Particularly its intrinsic fiber structure makes it worth investigating whether mycoprotein is suitable for producing low-processed alternatives to meat.

Mycoprotein as a meat substitute

The increased demand for protein and meat substitutes resulting from the rapidly growing world population has made the development of new food ingredients from alternative sources a critical global challenge [1]. Fungal biotechnology has shown great potential for developing such protein sources. The “mycoprotein” is produced by the selective fermentation of a starter culture. After thermal degradation of contained purines it is safe for consumption and reaches a protein content of 41% to 58% on a dry matter basis. Its amino acid composition is balanced, containing all essential amino acids [2]. Mycoprotein is also low in saturated fatty acids and high in dietary fiber (6%), about one-third of which is composed of chitin (N-acetylglucosamine) and two-thirds of β-glucans (1,3-glucan and 1,6-glucan) [3]. Furthermore, mycoprotein is free of cholesterol [4]. An intrinsic characteristic of mycoprotein is its fibrous structure, which is reminiscent of meat fibers. This holds potential for developing mycoprotein-based meat alternatives, such as vegan jerky. However, the challenge here is the fiber’s low stability. Fungal hyphae give mycoprotein its fibrous properties, but these hyphae are only weakly bound to each other and very fragile. Excessive mechanical stress during processing as caused by, for example, extrusion or shearing during homogenization of a compound can cause them to break, and the typical fibrousness of the product to be lost.

The aim of the EU-funded EIT food research project FUNGITIME was therefore to develop suitable processes of producing vegan snack products (e.g. jerky and salami alternatives) that make optimal use of the intrinsic fiber structure. In addition to a meat-like texture, these should possess high microbial stability, low levels of additives and have a claim to be high-protein. The latter is deemed to be achieved if the contained protein contributes at least 20% of a food’s energy density [5].

The fibers of mycoprotein

Fusarium venenatum is an ascomycetes fungus that grows in soil as filamentous microscopic structures called hyphae. Its hyphae with a diameter of about 35 µm usually consist of several elongated cells separated by partitions called septa. The cells contain aqueous protein material and electrically charged salt ions. Branching of the hyphae results in a filamentous network, the mycelium [6].

A distinctive feature of Fusarium venenatum A3/5 are its particularly long, sparsely branched hyphae that grow into an aligned web and bear a close resemblance to the muscle fibers of meat. However, the longer they are allowed to ferment the greater the level of branching gets, reducing the characteristic hyphal cohesion and loosening the quaternary structure. After about 1,000 to 1,200 hours of fermentation, the mycoprotein hyphae can lose their cohesion completely, leading to a loss of the characteristic muscle fiber-like structure. The duration of fermentation is therefore a decisive factor for product quality.

In food manufacturing, ingredients are often subjected to mechanical shear stress in order to form dough or to blend in other food ingredients such as spices, fat or flour. Even manual kneading and electric bowl chopping softens the texture of the mycoprotein and damages the fiber-like structure, suggesting that hyphal cohesion is impaired. Therefore, investigating the following was particularly crucial with a view to producing high-fiber meat substitutes:

Deep-frozen mycoprotein of different qualities, procured from the company 3FBIO, was used for the studies.

Fig. 1 Cryo-scanning electron micrographs of mycoprotein. Cross section before (A) and after (B) bowl chopping. The scale bars correspond to 1 µm.

The influence of the shear intensity on structures was examined by optical microscopy and cryo-scanning electron microscopy. Before applying the shear loads, the mycoprotein hyphae were intact, up to 1 mm long and partially branched. The hyphae were in juxtaposition with each other and the strands could be moved longitudinally, drawing filaments that were likely composed of proteins. They were connected to adjacent hyphae by proteins attached to the exterior of the hyphal surface, resulting in a stabilized three-dimensional arrangement in the form of macroscopically visible fiber strands. From a physicochemical point of view, the mycoprotein behaved similarly to polyolefin melt.

After kneading as well as after shear treatment, the surface proteins stabilizing the hyphal structure were unhinged and the hyphae separated from each other (Fig. 1). The hyphae themselves remained mostly intact after manual kneading. Bowl chopping, however, led to opened and emptied hyphae. Leakage of the charged intracellular material increased the ionic strength and electrostatic interactions in the environment. This might have lowered the structural resistance of the hyphae and facilitated mixing of the sheared mycoprotein with other food components and ingredients. While this would be beneficial to produce, for example, salami alternatives it significantly reduces fibrousness.

Fig. 2 Fiber alignment of mycoprotein showing strong adhesive interactions achieved by (A) kneading and folding the mycoprotein as well as (B) after adding gluten. The bars correspond to 1 µm.

Commercially available vegan jerky products usually go through an extrusion process to create an anisotropic alignment of the textured fibers. Such products tend to be based on soy protein or gluten, but some are also made of shiitake mushrooms.

The unstable intrinsic fiber structure of mycoprotein renders extrusion an unsuitable technique. To make the best use of the intrinsic fiber structure of mycoprotein in an effort to mimic a muscle-like texture of the product, the effect of various physical treatments on the alignment of the fibers was investigated. These treatments included making a homogeneous dough by hand kneading and passing it through a pasta machine, rolling it out on a board with a rolling pin, pressing it through a filling tube, and kneading and folding it into layered mycoprotein sheets. The latter technique proved to be particularly successful and was used to study the effect of different flours and of shear loads on the texture of the product. There was also an expectation that externally added protein would interact with the surface proteins between the hyphae in the form of protein-protein interactions and thus stabilize the orientation of the fibers. Based on its adhesive properties, the use of gluten to stabilize the hyphal structure was investigated. 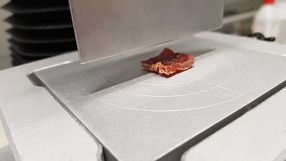 Fig. 3 The anisotropy of the jerky variants was investigated with a Texture Analyzer.

As expected, gluten interposed itself between the parallel structures of the hyphae in the form of a bonding layer of globules (Fig. 2). The gluten interacted with the surface proteins of the hyphae and thus stabilized the hyphal structure. This demonstrates that gluten can stabilize hyphal cohesion and increase fibrousness, especially in mycoprotein products with low cohesion resulting from, for example, a high level of branching and shear strain (folding).

Alternatively, the frozen mycoprotein block with a high proportion of intrinsic fibers was cut into 4.5 mm thick layers using a slicing machine, and further reduced to bite-sized pieces.

After marinating and baking, the effects on the product characteristics of the following two processes were compared: 1. Folding the mycoprotein and adding gluten and 2. Slicing the mycoprotein without giving additives. With regards to sensory properties, variant 2 (slicing) proved to be the better option of producing mycoprotein-based jerky due to the mycoprotein’s fibrousness and its anisotropic behavior, which was determined by means of a Texture Analyzer (Fig. 3). 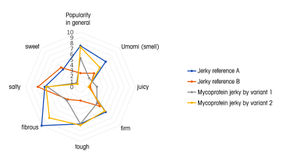 Fig. 4 Sensory evaluation of the mycoprotein-based jerky developed by processing variant 1 (folded, with gluten) and 2 (sliced), as well as two reference products.

In addition, the product properties were compared with two commercially available reference products. Reference A was meat-containing jerky based on beef, reference B a vegan jerky product based on soy protein. The firmness [N] of both mycoprotein-based jerky variants was similar to the meat-containing reference A and significantly higher than that of the vegan reference B. The water activity (aw) values of both product variants were lower than those of the reference products (0.69 and 0.62 vs. 0.76 and 0.80), reflecting the high microbial stability of the mycoprotein-based jerky variants.

Like the reference products, both mycoprotein-based variants of jerky can be stated to be “high in protein” (protein/energy: 42 and 26%), and also high in fiber. The length of the ingredient list was comparable to that of the meat-based reference A jerky and significantly shorter than of the commercially available reference B vegan jerky.

Particularly for products that require a muscle fiber-like structure, such as jerky, it is important that the mycoprotein is subjected to as little shear strain as possible. Slicing the mycoprotein block allowed the intrinsic fiber structure to be maintained. Alternatively, adding gluten during folding of the product can result in increased cross-linking of the surface proteins, thereby stabilizing the fibers.

Overall, these results demonstrate the high potential of mycoprotein for developing snack products, and high-fiber meat substitutes in general. The developed products are high in protein and deemed sensorially appealing, and they address consumer demand in several other ways: mycoprotein is free of allergens that require labeling [7], dairy-free, vegan, and suitable for flexitarians. The snack products are suitable for all three marketing channels, i.e. consumer at home, retail and hospitality.

The presented work to develop a production process for vegan snack products, for example jerky alternatives, from mycoprotein is funded by the EU’s Horizon 2020 framework program for research and innovation as part of the collaborative project FUNGITIME (one-year project duration in 2020) in the EIT innovation cluster EIT Food.

Proteins derived from fungi, such as Abunda mycoprotein, a complete food ingredient containing all essential amino acids, show high potential for meat alternatives. FUNGITIME is a research project in the “EIT Food” innovation cluster of the European Institute of Innovation and Technology (EIT), in which various food products made from Abunda mycoprotein are being developed. The FUNGITIME project aims to develop sustainable foods with optimal nutritional properties and high consumer acceptance. It is funded by the EU’s Horizon 2020 framework program for research and innovation.

(Abunda is a registered trademark.)

Sunflowers are grown primarily to produce vegetable oil. What remains after producing sunflower oil is a press cake which, despite its high nutritional value, is generally used only as (…)