The search for APIs in the genome of fungi

Fungi hold enormous potential to discover new active pharmaceutical ingredients (APIs) and valuable substances, for example antibiotics, pigments and raw materials for biological plastics. While conventional discovery methods are reaching their limits, recent developments in bioinformatics and biotechnology are paving the way for new approaches that promise the discovery of new substances.

Fungi as sources of valuable substances

The fungus kingdom comprises millions of species with a wide variety of properties and forms, spanning from edible forest mushrooms, to baker's yeast, to single-cell organisms found in huge numbers in the oceans [1]. Despite the differences between fungi, an important common feature is that they produce so-called secondary metabolites. These are chemical compounds that give the fungi certain survival advantages – and, potentially, us human beings new APIs and pharmaceuticals [2]. Without the discovery of penicillin, for example, our modern world would not be what it is today. Other fungal secondary metabolites are used to treat cancer or high blood cholesterol, or they serve as dyes or as components of biological plastics [3,4].

The secondary metabolism of fungi is highly diverse

Secondary metabolites of fungi originate from their secondary metabolism, which are various metabolic pathways whose products are not strictly necessary for normal growth. In contrast, the primary metabolism is essential for life and very similar in all organisms, even beyond the kingdom of fungi. Its evolution proceeds slowly and in measured steps because any change tends to have a major impact on the entire organism. The secondary metabolism, on the other hand, has allowed nature to play around and experiment [5]. Over millions of years this has resulted in an astonishingly wide variety of secondary metabolites in terms of their chemical structure and effects [6]. What we observe today is high variability in different fungal species. Adapting to the various organisms’ habitats and ways of being, fungal secondary metabolism has been able to evolve in different ways. This diversity promises the discovery of many new valuable substances [3].

Fig. 1 The path from the gene to the finished secondary metabolite. Secondary metabolites are formed step by step in enzyme cascades (A). The corresponding genes are often found in so-called “biosynthet-ic gene clusters” (B). Between essential genes (colored) there often lie so-called “gap genes” (gray), which are not involved in the biosynthesis of the metabolite. PKS, polyketide synthase; NRPS, nonribo-somal peptide synthetase

Polyketides, formed from acetyl and malonyl subunits, and nonribosomal peptides, composed of various amino acids, are the two most important groups in fungi [2]. In both cases, the chemical backbone of the secondary metabolite is formed at special enzyme complexes, the polyketide synthases and nonribosomal peptide synthetases, respectively (Fig. 1A). Further enzymes consecutively modify the backbone in an enzyme cascade that eventually yields the finished secondary metabolite (Fig. 1A). In fungi, the genes encoding the sequence of enzymes are often located in close proximity to each other on the DNA as so-called "biosynthetic gene clusters" (BGC) (Fig. 1B) [2].

The conventional method of identifying secondary metabolites from fungi (Fig. 2) typically requires lots of equipment and work in the laboratory. A main reason is that most BGCs are not active under standard growth conditions, as the fungus does not produce the secondary metabolites in the lab because it does not need them. So, to find new secondary metabolites, a fungus must first be prompted to biosynthesize them. To this end, the fungus is cultivated on different nutrient media, together with other organisms or under certain stress conditions. Such untargeted efforts are, however, often unsuccessful, and many BGCs of a fungus remain inactive [7,8]. 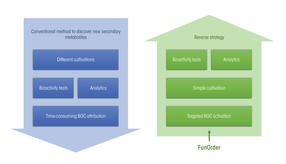 After numerous cultivations under different conditions it is possible to test for specific biocapabilities, such as antibacterial activity. Alternatively, or in addition, various analytical methods can be used to search for and characterize new substances. When an active substance is found, it must then be attributed to a BGC, as the conventional approach does not target BGC activation. This is usually a time-consuming process that may take several years and which will not be discussed here in detail.

New approaches: from gene to product

The limitations of the conventional method has led to the rise of a reverse strategy (Fig. 2) [3,8]. Therein a BGC is activated by targeted genetic manipulations, or transferred into another organism. If such genetic manipulations are cleverly designed it is possible to ascertain under which conditions the BGC is active, so a simple cultivation can be sufficient. Ultimately, as with the conventional method, there are tests for bioactivity, and the new substance is chemically analyzed and characterized. This approach does not need the numerous cultivations and the subsequent attribution of a secondary metabolite to a BGC because the genes themselves are what it builds on. The strategy also makes it possible to activate BGCs that could not be activated by conventional methods. However, the reverse strategy requires the availability of genome sequences and the correct prediction of BGCs [4].

Which genes in a BGC are essential?

Progress in sequencing technology over recent years has led to an explosion of available genome sequences. There are also a number of bioinformatics tools that can predict BGCs [9]. However, even after successful identification of a BGC by the reverse strategy, a major stumbling block remains: the so-called “gap genes” in many BGCs (Fig. 1B). These are genes that lie within BGCs purely by coincidence and have nothing to do with the biosynthesis of the associated secondary metabolite. An efficient and successful reverse strategy must activate only the genes that are involved in the biosynthesis of the metabolite, the so-called essential genes. Earlier tools have tended to focus on predicting BGCs only in principle, with subsequent time-consuming manual evaluation and interpretation needed to distinguish between essential genes and “gap genes”. We have now developed a method called FunOrder that supports the identification of essential genes [10]. 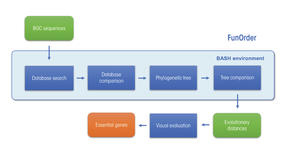 Fig. 3 Overview of the steps involved in the FunOrder technique

As previously mentioned, evolution proceeds faster in secondary metabolism than in the rest of the genome. We can also assume that the evolution of the individual genes within a BGC proceeds at approximately the same rate and in the same direction, since the resulting enzymes in a biosynthetic pathway must be coordinated with each other (Fig. 1A). We call this co-evolution. Based on this assumption, we have developed "FunOrder", a bioinformatics tool that calculates co-evolution (Fig. 3) [10].

The method initially compares the sequences of all genes of a BGC with an experimentally optimized database. Based on sequence alignment with the closest relatives, a phylogenetic tree is constructed for each gene. The trees of each gene are then compared and evolutionary distances calculated. In other words, the method calculates how closely the evolutionary paths of the individual genes resemble each other. In a final step, the evolutionary distances are visualized in different ways and interpreted manually.

The FunOrder method calculates the co-evolution of different genes and thus identifies essential genes in a BGC, which is used to design reverse strategies for discovering new secondary metabolites and thus potential new drugs. Currently, we are working on the full automation of this method to further accelerate the process, which will be helpful in light of the constantly growing number of new genome sequences.