For almost every one of the 17 goals that the 2030 Agenda for Sustainable Development sets out, food and its value chain plays an important role [1]. With this agenda, the United Nations has created a global framework for action that addresses all social players. To ensure sustainable production, healthy nutrition and global availability of balanced staple foods, all producers and each and every individual must take responsibility for their consumption behavior. It is the task of all, and especially of research and development in industry and academia, to assiduously look for new solutions toward achieving these goals.

One endeavor that can contribute to reaching these goals is making best use of the wheat gluten proteins, which as plant proteins have a better water and nutrient balance than animal proteins. Wheat gluten is a by-product of starch production and is used in dry and milled form as a biobased adhesive in a variety of applications (see Fig. 1, right). Increasing attention is now being given to its functional properties and potential for specific applications. 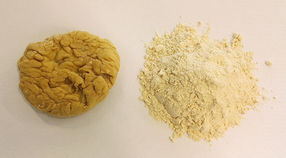 Fig.1 Vital wheat gluten in its hydrated (left) and dry form (right). Vital gluten is sold as an easy to store and dose powder. It is used as an additive in the baking industry, as well as for sauces and even for cosmetics. In meat substitutes, it is used as the main ingredient (seitan) or as an additive.

Wheat proteins are attracting particular interest in science and industry because they differ from other plant storage proteins in that they can form a viscoelastic network through hydration. This allows a wide variety of products to be manufactured, most of which are used in the baking industry. Vital wheat gluten helps to standardize the protein content in flour and, in its rehydrated form, is embedded in dough to improve processability. As a cohesive viscoelastic network, gluten provides the characteristic properties of bread and baked goods, enabling high gas retention levels, a product-specific loose pore structure and the airy soft texture of pastries. Adding wheat gluten increases the water absorption capacity, which improves the freshness of baked goods.

Vital gluten is also used as an additive in sauces, as pure rehydrated wheat gluten in meat substitutes such as seitan (see Fig. 1, left), and even in some cosmetics [2,3]. 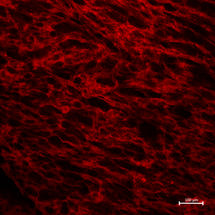 Fig. 2 This image of the protein structure in wheat dough shows the fine cross-links in gluten (confocal laser scanning microscopy, rhodamine B staining).

Wheat gluten is often equated with the term wheat protein. In fact, wheat proteins are divided into four fractions according to the extraction scheme developed by Osborne: solubility in water (leucosin), saline (edestin), ethanol solution (gliadin) and a remaining non-soluble fraction (glutenin). The latter two fractions represent the bulk of wheat protein and are often grouped together as gluten. The globular gliadins are responsible for its viscous properties and can be divided further into the subfractions α/β, γ, ω1,2, and ω5 gliadin, based on their primary structure [4,5]. Glutenin represents the elastic portion of the gluten network and can be divided into a high molecular and a low molecular weight group. Due to strong intra- and intermolecular cross-linking and repetitive sequences that are arbitrarily combined and repeated, there is no unique structural formula for glutenin. Besides covalent bonds and hydrogen bonds, it is mainly disulfide bonds that achieve cohesion in a gluten network (Fig. 2). 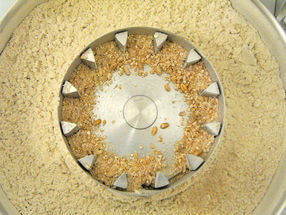 Fig. 3 Wheat grains during grinding with an ultra centrifugal mill: various processing steps allow the properties of the resulting material to be influenced, for example by applying higher mechanical stress or higher temperatures.

As a natural product, vital wheat gluten can differ in functionality depending on its manufacturer [6]. So beyond its mere structure, the relationship between structure and functionality is important. The conditions during production and further processing (e.g. temperature, mechanical stress) or the addition of other substances can affect the protein structure and thus the properties of the network, whether achieved intentionally or not (Fig. 3). Knowledge of these influencing factors can be used for the targeted control of processing and possibly even to open up new application areas for vital gluten. In its dry state, vital gluten is extremely temperature-stable: Fourier-transform infrared spectroscopy (FTIR) can still measure intact secondary protein structures at 170 °C (Fig. 4) [7].

Fig. 4 Fourier-transform infrared spectroscopy (FTIR) image from the publication Wehrli et al. (2020) [7]. The FTIR spectrum of vital wheat gluten heated to 170 °C resembles that of unheated vital gluten at room temperature (RT) with respect to many features that are characteristic of the secondary protein structure. The spectrum of a sample heated to 250 °C, on the other hand, no longer shows similarities with the typical vital wheat gluten spectrum.

X-ray photoelectron spectroscopy (XPS) reveals that there is less nitrogen on the surface of the gluten at this temperature. Since the nitrogen is not outgassed in thermogravimetric analysis with mass spectrometry (TGA-MS), it can be assumed that the nitrogen is still present in the material and that the protein structures have merely folded differently. In its hydrated state, however, gluten denatures at much lower temperatures.

The critical temperature in the lower relevant range (56 to 64 °C) depends on the ratio of glutenin to gliadin. Because gliadin is the more temperature-stable, rheological tests show samples with higher gliadin content to exhibit denaturation effects at higher temperatures. In the higher temperature range (79 to 81 °C), denaturation of the remaining gliadins takes place [7]. Knowledge about the dynamics of protein denaturation and the network properties as a function of protein folding makes the material more predictable. Depending on the water content, different textures are achievable, which is why gluten is very versatile.

Vital wheat gluten as an additive in meat substitute products

Targeted control of vital wheat gluten’s functionality would serve not only the reproducibility and standardization of baked goods; vital wheat gluten is also used as a meat substitute in the form of seitan [2]. The main challenge in producing meat substitutes is getting the texture, taste and color right, properties which are achieved with the right combination of ingredients and processing conditions. During the production process, shearing plays a key role. This results in fibrous structures, which solidify by subsequent heating, cooling and coagulation. The most commonly used methods are extrusion, shear cell technology, and a spinning process in which proteins are arranged into long filaments [8]. Vital wheat gluten plays an important role: gluten is not only used for seitan, a wheat-based meat substitute product, but also as an additive for products made from plant proteins, such as soy protein or pea protein isolates [9]. Vital wheat gluten forms thin protein films that remain stable due to the elasticity of the protein. Its high water retention capacity helps to imitate juicy meat. Disulfide bonding, both intramolecular within gluten and intermolecular with other plant proteins, results in a stable network and controlled fiberization. This improves the overall physical properties and brings the product closer to the characteristic fiberization and texture stability of meat [10].

Potential in the non-food sector

The application areas of vital wheat gluten have expanded beyond meat substitute products into the non-food sector as sustainability becomes ever more important in manufacturing. The protein’s potential as a biodegradable material is now also being explored [2,11,12]. For example, it shows promise as an elastically formable and water-repellent biofilm in the production of packaging. Its regional availability and cost-efficiency as a by-product of starch production are further advantages. The elasticity and hydrophobicity of vital wheat gluten have posed analytical and technological challenges in the past, which is why there is still a lot left to discover. However, these challenges also reflect the promise that still lies in this protein.

The research on the relationship of structure and functionality in vital wheat gluten was carried out in research project AiF 19710, which was funded as part of the Industrial Collective Research (IGF) program by the German Federal Ministry of Economics and Technology (BMWi) via AiF (Arbeitsgemeinschaft industrieller Forschungsvereinigungen “Otto von Guericke” e.V.) through the Research Association of the German Food Industry (FEI).