Vegetables are a key component of a healthy diet [1] because, in addition to vitamins, minerals and fiber, they contain various classes of secondary plant compounds. Vegetables of the cruciferous family (Brassicaceae), which includes broccoli, cabbage, cress and arugula, contain glucosinolates, which are responsible for the characteristic taste, pungency and smell of these vegetables and are associated with positive effects on human health.

Epidemiological and intervention studies suggest that consumption of cruciferous vegetables may reduce the risk of developing cancers such as colorectal or prostate cancer. This is attributed to the presence of glucosinolates and their degradation products [2]. 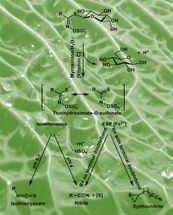 It is not the glucosinolates as such but their degradation products, isothiocyanates, that are responsible for both the pungency of the vegetables and their protective health properties. Isothiocyanates have antimicrobial, anti-inflammatory and chemopreventive effects, which allows them to intervene in several stages of carcinogenesis [2-4]. These substances are mainly formed by enzymatic hydrolysis of glucosinolates in raw vegetables when the plant’s tissue is destroyed (e.g., by chewing or cutting) [5] (Fig.1). In this process, the enzyme myrosinase initiates the degradation process by splitting off glucose. A highly unstable intermediate is formed, which can rapidly decompose to isothiocyanate. However, other proteins, the so-called specifier proteins, and further factors can influence the degradation of the intermediate, which may result in nitriles or epithionitriles being predominantly formed (Fig. 1), the latter only from glucosinolates with a terminal double bond (alkenyl glucosinolates). An example of such an alkenyl glucosinolate is allyl glucosinolate (sinigrin), which occurs in horseradish, mustard and some other plants, but is degraded there to the pungent allyl isothiocyanate. Particularly Brassica vegetables (e.g., broccoli, cabbage) often predominantly form epithionitriles and nitriles instead of the more desirable isothiocyanates. This is due to their epithiospecifier protein (ESP) activity.

Influence of preparation on glucosinolates and their degradation – optimization approaches

To increase the formation of isothiocyanates in Brassica vegetables, several approaches are conceivable: 1) increasing the glucosinolate concentration of the vegetables, 2) reducing the activity of specifier proteins such as ESP in the plant by changing the growth conditions, 3) reducing ESP activity by using appropriate preparation methods, and 4) influencing thermal degradation. While there is a large number of studies on the first approach, our research group mainly focuses on approaches 2 to 4.

In contrast to Arabidopsis thaliana, a model plant of biology in which only one ESP occurs, three functional ESP isoforms are found in broccoli, kohlrabi and white or red cabbage (Brassica oleracea), and these differ in their organ-specific localization and activity as a function of pH [6]. This brings up the question whether their activity can be reduced by environmental factors such as light or temperature. To determine the extent to which glucosinolates and the formation of their degradation products vary in commercial white and red cabbage, several supermarkets were sampled at regular intervals over a three-month period. Glucosinolate profiles and amounts differed little among the white or red cabbages sampled over the three months. However, it appeared that more isothiocyanates were formed in the red cabbage sampled in late summer than in red cabbage sampled in late November, where epithionitriles and nitriles dominated. In white cabbage, on the other hand, this effect was often insignificant. Since the cabbage originated from different regions in Germany and was grown and stored under different conditions, the results suggest that the time of cultivation may strongly influence glucosinolate degradation, and that summer vegetables might be preferable [7]. We are currently investigating which environmental factors influence ESP activity and glucosinolate degradation in field trials and under controlled conditions.

The formation of isothiocyanates can also be favored by choosing appropriate food preparation conditions: by adding acetic acid during salad preparation, the isothiocyanate content of red cabbage salad could be doubled [8] (Fig. 2A) because ESP activity decreases in acidic conditions [6] and thus fewer nitriles and epithionitriles are formed.

Influence of heating on glucosinolates and their degradation products

Brassica vegetables such as cabbage or broccoli are often heated before consumption. Controlled heating could exploit the temperature sensitivity of ESP because brief heating of the vegetables to approximately 60 °C inactivates ESP, while myrosinase still remains active. This can also promote enzymatic isothiocyanate formation [9,10]. When heated to temperatures around 80 °C, myrosinase is also inactivated and the enzymatic degradation of glucosinolates ceases [10]. If vegetables are cooked in water, the glucosinolates and their degradation products rapidly leach into the cooking water. After only 10 minutes of cooking, 32 to 68% of glucosinolates can be lost to the cooking water [11]. In addition, glucosinolates can be degraded thermally, setting free nitriles. This is particularly the case if cooking exceeds 10 minutes (Fig. 2B). With respect to heating, the glucosinolates of blue cabbage (with added sodium bicarbonate) were more stable than those of red cabbage (with lemon juice or vinegar), which after cooking also contained more nitriles [8] (Figs. 2B and 2B). Therefore, short steaming often preserves the glucosinolate in vegetables better [12]. The glucosinolates that we take up can later be microbially degraded in the colon. However, this degradation pathway is highly dependent on each person’s composition of the gut microbiota, and only about 2 to 15% of these glucosinolates are degraded to isothiocyanates [13].

Enzymatic degradation of glucosinolates in raw cruciferous vegetables remains the most potent source of health-promoting isothiocyanates, the formation of which can be increased by acidification during salad preparation. The primary enzymatic degradation within the plant thus plays a key role in the formation of isothiocyanates. A better understanding of the regulation of specifier proteins such as ESP is therefore an important step towards exploiting the full potential of glucosinolates.