“We are what we eat.” In a way, this quote by the German philosopher Ludwig Feuerbach (1804–1872) also applies to what we feed our offspring: the aroma profile of breast milk reflects a mother's eating habits [1, 2] and can thus influence the preferences of her children for different foods [3–7].

The molecular foundation of what might be sensory imprinting in early childhood was investigated by means of a curry dish, in a recently published intervention study. It was conducted at the Chair of Aroma and Smell Research at the Friedrich-Alexander University Erlangen-Nürnberg (FAU), headed by Professor A. Buettner, in cooperation with the Chair of Food Chemistry and Molecular Sensory Science at the Technical University of Munich (TUM), headed by Professors T. Hofmann and C. Dawid [8, 9]. The study investigated the transfer of odor- and taste-active compounds and analyzed how metabolic processes influence the composition of breast milk. This could shed light on processes of early childhood imprinting and, possibly, the resulting preferences of individuals, which in turn may be associated with health advantages or disadvantages (e.g. [10]). Such research projects also enable in-depth investigation of human digestive, metabolic and excretory processes that are closely health-related (e.g., [11]).

Previous studies have already shown the transfer of specific aroma compounds and their metabolites into breast milk, as in the case of sulfur-containing substances in garlic [12], ramson [13] and terpenes such as 1,8-cineole which is also called eucalyptol due to its eucalyptus-like odor [14]. Based on these findings, the aim of the consumption study presented here, was to comprehensively study the spectrum of compounds and metabolites that may influence sensory development in infants. Due to its complex odor and taste profile a curry dish was selected for this purpose. This allowed the investigation of a wide range of chemosensorially active target compounds in breast milk.

Chemosensorially active target compounds and aim of the study

Chemosensorially active substances include odor- and taste-active substances as well as so-called trigeminally active compounds. The volatile odor-active compounds reach the olfactory mucosa either orthonasally, i.e. via the nose, or retronasally via the throat when food is consumed. In the olfactory mucosa their interaction with G-protein coupled receptors evokes an olfactory perception. In contrast to odor compounds, there are many non-volatiles among tastants, for example elemental ions, amino acids, sugars and alkaloids. Our salty and sour senses of taste are caused by interaction with ion channels, whereas sweet, bitter and umami are caused by interaction with G-protein coupled receptors. Trigeminal compounds, on the other hand, are perceived by the trigeminal nerve (Nervus trigeminus) and evoke cooling, pungent or similar sensory perceptions. A compound may, for example, elicit an odor and taste perception while seeming to be cooling, hot or pungent, i.e. it is perceived multisensorially. 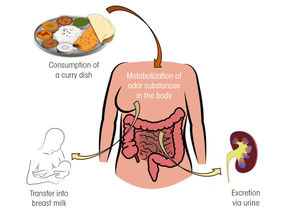 Fig. 1 Study design. After consumption of a curry dish, donated milk and urine samples were analyzed for chemosensorially active compounds and their metabolites. Additional excretion may occur via breath and the skin (not shown here).

Sensory-analytical methods can be used to characterize chemosensorially active compounds in foods as well as their transition into breast milk. Chemosensorially active compounds can be distinguished from other compounds by combining chemical and human sensory analysis. In both gas chromatography-olfactometry/mass spectrometry (GC-O/MS) and liquid chromatography-taste dilution analysis/mass spectrometry (LC-TDA/MS), the human nose and tongue, respectively, act as a detector.

Odor- and taste-active substances are mostly metabolized along their path through the human body. Odorants are excreted via urine, skin and breath in addition to breast milk, tastants primarily via urine. These excretions can be used to identify metabolites and thus to characterize metabolic processes of chemosensorially active compounds in the body. For example, 1,8-cineole is excreted via diverse body fluids that contain distinct metabolic products [14–16]. Functionalization and conjugation are two of the biochemical processes that odor compounds can undergo during metabolization [17]. In the study presented here, metabolites in urine were examined in direct comparison with breast milk. This serves to elucidate differences in metabolism and excretion of individual chemosensorially active compounds from the curry dish (Fig. 1).

Standardization and characterization of the curry dish

Detection of linalool, 1,8-cineole and piperine 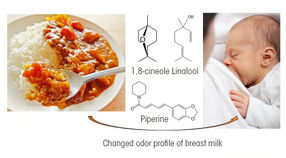 Significant sensory changes were perceived in the breast milk up to two hours after the intervention, even though the overall aroma intensities were very low. In particular, a bergamot-like odor was noticed, which could be attributed to linalool passing over into the milk. To our knowledge, this study is the first report of its transfer into breast milk. In addition, low concentrations of 1,8-cineole and piperine were detected throughout the sampling period (see Fig. 2). None of the other constituents showed significant transitioning into breast milk. Estimations of the transition rates into breast milk of nursing mothers ranged from 2 to 4 x 10–4% for linalool, 0.4 to 8 x 10–2% for 1,8-cineole and 0.5 to 2 x 10–2% for piperine. The amounts varied greatly between individuals and showed compound-specific transition patterns. This indicates disparate metabolization of the substances by the different participants, as well as distinct metabolic processing of the individual compounds themselves.

The answer to the question of whether an infant perceives chemosensorially active compounds at all is determined primarily by the concentration of these compounds in the breast milk. Odor and taste threshold concentrations for the individual constituents, as determined by the study’s sensory test panel, suggest a stimulation of sensory impressions in the infant to only be conceivable for linalool and 1,8-cineole. Piperine remained below the threshold for sensory perception at all times. Nevertheless, it cannot be excluded that infants sensorially perceive piperine, since the thresholds were determined by adult panelists, and infants might have a more sensitive sensory perception [18, 19]. Moreover, the interference between different chemosensorially active compounds might enhance the perceptibility of a compound beyond its individual threshold [20].