With Light in the Fight against Malaria

Malaria represents a global threat to health, which is difficult to keep under control. Amongst more than 200 million sufferers, over 500,000 die each year of the disease, with the risk of a fatal outcome being particularly high in children [1].

The disease is triggered by the single-celled pathogens of the genus Plasmodium and is transferred by mosquitoes. Therefore, effective prevention is provided by the use of ­insecticide-treated mosquito nets, and various organisations are committed to ensuring their large-scale provision. A vaccination would be a more effective means of prevention. Unfortunately, although a vaccination has long been the subject of research, no vaccine has yet been found and it is also unlikely that one will be introduced in the near future.

The only remaining treatment option, therefore, is medication-based therapy. Due to their extensive application, many pathogens have already developed resistance to the various active ingredients. The most effective medication against such multi-resistant pathogens and malaria is, in general, artemisinin combination preparations. These contain the potent active ingredient arte­misinin in combination with a further preparation, and are the medication of choice for the WHO [1]. 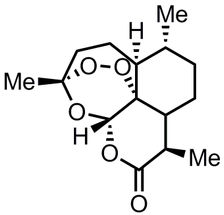 The Discovery of Artemisinin

Whilst searching for an effective means to fight malaria, Chinese scientists investigated the most diverse plant extracts and combed through ancient literature. As a result, artemisinin was identified as an active ingredient in sweet wormwood (Artemisia annua) in the 1970s [2]. The structure of artemisinin is shown in Fig. 1, whose complexity is essentially responsible for its effectiveness. In particular, the high chemical reactivity of the bridge between two neighbouring oxygen atoms, an endoper­oxide, is a very rare structure in a natural substance.

Fig. 2 The synthesis path of artemisinin originating from artemisinic acid.

Due to the complexity of the molecule, laboratory synthesis is too time consuming and economically unviable. Therefore, the active ingredient must be extracted from the plant material using suitable solvents. Since the artemisinin content of the plant is very low, huge cultivation areas are required. As a result, the amount of extracted artemisinin is insufficient to cover global market demand. Furthermore, crop failures can lead to a shortage of the active ingredient and to major price fluctuations. The fact that artemisinin combination preparations are relatively expensive means that those who need the medication most, primarily patients in Africa, cannot afford the therapy. Therefore, establishing a cost-effective supply of artemisinin in sufficient quantities is of utmost priority.

The considerably simpler molecule, artemisinic acid, is formed in the plant as a precursor molecule. This is converted to artemisinin through a complicated reaction sequence involving oxygen and light, as shown in Fig. 2. The yield of this precursor molecule in the plant, in comparison with artemisinin, is ten times greater. To date, however, artemisinic acid has not been used. If this waste product can also be used and converted to artemisinin, this highly sought-after active ingredient could be produced in considerably greater quantities and at lower prices. Aside from the plant source, artemisinic acid can already be produced using biotechnological techniques alone [3].

Fig. 3 The photoreactor is made up of a light-permeable tube wrapped around a cooled light bulb.

In order to produce artemisinin from artemisinic acid, the first step necessitates reduction to dihydroartemisinic acid. This reaction is relatively non-critical and can be performed on a large scale [4]. Up until now, however, the subsequent oxidation with singlet oxygen has proved to be an obstacle. This is a reactive form of oxygen, which can be produced with the aid of light and a photosensitiser. Singlet oxygen is very short-lived and must, therefore, be created in situ during the reaction. The light does not penetrate deeply enough in large reaction vessels, causing the photoreaction to be very ineffective and meaning that this reaction could not be used, up until now, on a large industrial scale.

This problem can be conveniently solved with the aid of flow-through chemistry [5]. This involves wrapping a thin tube around a powerful light source in the form of a medium-pressure mercury-vapour lamp. The structure of the photoreactor is shown in Fig. 3. To protect against UV radiation, the lamp is housed in a metal casing. The tube itself is made of light-permeable perfluoroethylenpropy­lene-copolymer (FEP) and, due to its very small diameter, the light can illuminate the entire tube. A solution of dihydroartemisinic acid is mixed with gaseous oxygen and then pumped through the tube wrapped around the lamp. With this arrangement, it is possible to perform the critical reaction step with a very short reaction time of only two minutes, producing high yields. Here, a chemically relatively unstable hydroperoxide is formed as an intermediate stage. 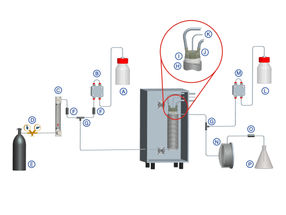 Fig. 4 Schematic design of the fully continuous reactor for the production of artemisinin from dihydroartemisinic acid.

An acid catalysed reaction and oxygenation with normal oxygen, triplet oxygen, is necessary for the further conversion to artemisinin [6]. This initiates various rearrangements in the molecule, so that finally the complex artemisinin is formed. Since the oxygen is already present from the first reaction step, it seemed logical to pass the strong trifluoroacetic acid through a second pump into the solution, without needing to isolate the unstable intermediate. In order to complete the reaction, the solution is briefly warmed to 60 °C (see Fig. 4). After a total of only 4.5 minutes, the dihydro­artemisinic acid is completely converted and a solution of the product artemisinin flows out of the tube.

The reactor assembly is shown schematically in Fig. 4. The solution of dihydroartemisinic acid (Fig. 4, A) is advanced with the aid of a pump (Fig. 4, B) and mixed with oxygen in a T-mixer (Fig. 4, G), which is dosed using a through-flow regulator (Fig. 4, C) from a gas bottle (Fig. 4, E). After leaving the photoreactor, the solution trifluoroacetic acid (Fig. 4, L) is added via a T-mixer and the solution is warmed in a thermal reactor section (Fig. 4, N). Finally, raw artemisinin is obtained in 40 % yield. Due to the continuous flow, only one final purification is necessary for all the important reaction steps.

By coupling the flow-through and photochemistry, it is possible to produce the active ingredient artemisinin in high yields very efficiently. The entire reaction time for all the reaction steps is less than five minutes. The process, therefore, also lends itself to the production of artemisinin in larger quantities, which has not been possible until now. The production capacity of the simple reactor already lies now at 200 g artemisinin per day. With further improvement it should be possible to cover the entire global market requirement with only 800 reactors and thereby secure the treatment of all malaria sufferers.