From RNA World to Protein World

Within the various domains of life, the evolution of the tRNA processing enzyme (RNase P) has led to a set of highly diverse architectonic solutions. Bacterial RNase P thus has a fundamentally different structure to human RNase P enzymes in the cell nucleus and mitochondria. This structural and functional diversity could lead to the development of new antibiotics.

The central role of proteins in living cells

Nearly all of life’s processes – whether occurring in the tiniest bacterium or a highly complex human cell – are both effected and regulated at the molecular level by proteins, protein complexes or complexes consisting of ribonucleic acids (RNAs) and proteins (termed “ribonucleoproteins”). A central role here is played by a process known as enzyme catalysis: this process enables, accelerates and orchestrates a veritable host of biochemical reactions. Proteins are constructed in a sophisticated factory (the ribosome, a gigantic ribonucleoprotein complex) from a range of individual building blocks (amino acids). The blueprint for each protein is supplied by messenger RNA (mRNA). Amino acids are supplied to the ribosome by specialised carriers termed transfer RNAs (tRNAs). These tRNAs are therefore essential for ensuring proper protein synthesis: following creation as “precursors”, tRNAs must be “processed”, i.e. converted to a biologically active form (fig. 1). There are 20 standard amino acids, and for each amino acid there is at least one tRNA specific to it: these tRNAs are illustrated in figure 1 as differently-coloured wheelbarrows. 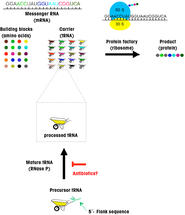 Fig. 1 From 5' tRNA processing to protein. The precursor tRNAs (shown here as wheelbarrows) are processed by RNase P and thus transformed into their functionally active state. Protein synthesis then takes place on the ribosome. The red barrier shown illustrates the strategy we are pursuing for the development of new antibiotics that can inhibit protein biosynthesis at the level of tRNA processing.

Ribonuclease P (RNase P) is essential for the processing of the tRNAs in their precursor form: via the targeted hydrolysis of a phosphodiester bond, RNase P cleaves a leader sequence (5' flanking sequence) from precursor tRNA, thus creating a functional tRNA end. As the tRNA thus generated can transport the amino acid efficiently to the ribosome only in this mature form, this is therefore an essential in vivo process. Structurally, bacterial RNase P is built up from a larger catalytic RNA subunit and a small protein subunit; while the latter does not participate directly in catalysis, it is nonetheless essential in a cellular environment [1]. Uncovering the catalytic properties of this RNA in 1983 by Sidney Altman was a ground-breaking discovery at the time (1989 Nobel Prize shared by S. Altman and Tom Cech). Later research worked out further details, namely that the architecture of the RNase P enzymes showed marked differences between the various domains of life (Bacteria, Archaea, Eukarya and eukaryotic organelles). Alongside its RNA component, nuclear localised human RNase P thus possesses not only a single protein cofactor but no less than 10 separate protein components. Even pure protein enzymes lacking an RNA subunit have been found in terrestrial plants and human mitochondria [2–3]. This paints a picture in which the “protein burden” of RNase P has increased during the evolution of organisms that diverged from bacteria [4–5].

Fig. 2 Evolutionary changes to RNase P enzymes in the various domains of life, with a hypothetical RNA-only enzyme at the origin of ­ RNase P evolution. Figure modified from [5]. Within the Eukarya, diversification has taken place: in the cell nucleus of Animalia, we find an RNA enzyme with 10 associated proteins, whereas in the mitochondria we find a pure protein enzyme consisting of 3 separate protein subunits. In land plants, RNase P consists of a protein singleton, both in the nucleus as well as in the mitochondria and chloroplasts.

From RNA world to protein world

The evolutionary trend just described tallies with the hypothesis that the early molecular evolution of life only reached the protein-dominated world in existence today after first passing through an “RNA world” phase. We assume that the original forms of life in this short transitional phase in the Earth’s history were solely the work of RNA polymers (perhaps in conjunction with small peptides), since RNAs can act both as enzymes and stores of genetic information (as is e.g. the case for RNA viruses) [6]. On this RNA World hypothesis, proteins came about only later – and thus enzymes as we know them today. Accordingly, “ancient” RNase P was thus possibly a pure RNA enzyme or “ribozyme” (fig. 2). In the course of evolution, the bacteria then recruited a small additional protein, while, independently of this, archaeal RNase P RNA acquired 5 completely different protein components. In the eukaryotic nucleus, these 5 proteins typical to Archaea were retained and a further 4–5 proteins were then acquired in the course of evolution. None of these archaeal/eukaryotic proteins possesses any identifiable similarity with the bacterial RNase P protein (fig. 2) [5]. 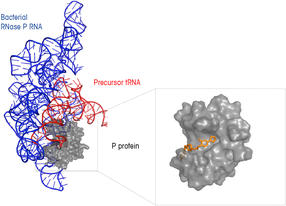 Fig. 3 Three-dimensional presentation of the bacterial RNase P holoenzyme. Together with the P RNA (blue), the P protein (grey) forms a ribonucleoprotein complex, to which the precursor tRNA (red) then docks. In the process, the region of the tRNA to be processed binds to the protein’s central cleft. The enlargement shows the P protein plus the bound ligand (orange) intended to function as an inhibitor.

Exploiting evolutionary differences in the development of antibiotics

The structural differences between the various RNase P enzymes could be exploited in the development of new antibiotics (from Greek ’αντí “against” and βíος “life”).

A central precondition for the medical applicability of such active ingredients is that they are highly effective at the target site while having no effect on the equivalent human enzymes. This would be the precise scenario here, since the architecture of human RNase P enzymes in the cell nucleus and mitochondria is fundamentally different to bacterial RNase P enzymes. Above and beyond this, RNase P fulfils the key condition of belonging to those 6–7% of bacterial genes [7–8] that are indispensable for the survival of the microorganisms.

Accordingly, the preconditions look favourable for the development of RNase P-specific antibiotics.

We thus made an initial assessment of the possibility of inhibiting the function of the catalytic RNA component
in bacterial RNase P. To this end, we developed antisense oligonucleotides that are capable of specific, high-affinity binding to an easily-accessible region of the RNA subunit: this induces a biologically inactive conformation of the RNA, thereby blocking binding to the “raw tRNA” (substrate) to be processed. Clinical investigations revealed blocking effects in the low nanomolar range [7, 9]. Finally, this inhibition of bacterial RNase P was also demonstrated in vivo: here, we utilised oligonucleotide analogues, known as peptide nucleic acids (PNAs), which had also been coupled to invasive peptides. These experiments were the first to result in the documentation of specific, bacteriostatic inhibition of bacterial RNase P [10].

Notwithstanding this, the protein subunit of bacterial RNase P is also an attractive target for inhibitors, since it is also crucial to the survival of bacterial cells. In light of this fact, we utilised the known molecular structure of the protein to carry out a computer-aided design procedure aimed at identifying classes of compounds for which binding to the RNase P protein – and especially in the region of its central cleft, which is involved in substrate binding – is predicted [11]. While one molecule group with an elongated structure thereby identified did in fact exhibit significant and specific inhibition of the RNase P function in kinetic in vitro experiments, the value achieved to date for half-maximal inhibition is still in the micromolar range.

We plan to further improve the compounds mentioned above as targeting the protein subunit by conducting a structure-activity relationship investigation. To this end, a three-dimensional structure of the protein will be determined in a complex with the inhibitor, so as to lay the foundation for the design and synthesis of derivatised high-affinity compounds. In this work, we are benefiting in particular from a fruitful partnership with the organic-synthetic research group led by Prof. Dr. Diederich – a group also based at the University of Marburg’s Institute for Pharmaceutical Chemistry.

In a second line of enquiry we are also seeking to exploit the architectonic differences between RNase P enzymes as already sketched out above. By deploying a bacterial strain that uses either bacterial RNase P or the exclusively protein-dependent RNase P from A. thaliana for tRNA processing, the intention is to utilise a high-throughput screening (HTS) procedure to discover a compound that selectively disrupts the proliferation of bacteria whose growth is dependent on bacterial RNase P. Such a molecule would thus not only be specific to bacterial RNase P but would necessarily be able to pass through the cell wall and membrane. To this end, a partnership is planned with the Leibniz Institute for Molecular Pharmacology in Berlin.

We therefore hope that this ingenious exploitation of the structural differences between various RNase P enzymes will discover a potent inhibitor and thus make a contribution to the development of promising new antibiotics.