The new world of automated dosing

Every scientist studying at university was confronted in chemical practicals with the problem of dissolving a given powdered substance in a given solution and producing a solution with the prescribed ­concentration. The first step was to weigh. Armed with a spatula and a small sheet of weighing paper, a fixed amount of the substance was weighed on usually outdated laboratory scales and then transferred (as completely as possible) from the paper to a graduated flask, which was then filled up with solvent up to the calibration mark and stirred well. The solution was then ready. Depending on skill and experience, that would take a few minutes or longer. If many such solutions need to be made up, a tedious and time-consuming business. One may well have cursed and yearned for a device that would do this work automatically. The technology has now been around for some years to automate these activities.

The scientific director of SUCCIDA AG, Prof. Dr. Jürgen ­Brickmann, spoke in Greifensee near Zurich to Dr. Joanne Laukart of Mettler-Toledo AG, a company that has brought just such a system on the market, about various aspects of automated dosing.

Prof. Jürgen Brickmann: How did it all start with the idea of automated powder dosing?

Dr. Joanne Laukart: It goes back a long time. Analytical balances have been around for a very long time. We conducted a survey in different industries to identify everywhere that analytical balances are used, as well as for which purposes. In the pharmaceutical industry, practically 90% of balances are used for powder dosing. We measured the time involved and estimated the reliability of the dosing. People are spending 10–20 % of their working time sitting in intense concentration at their balances and dosing powder. That is tedious and not particularly sexy.

Six to seven years ago.

Who provided the impetus for this development?

We established that we could make the use of our analytical balances significantly easier and more
effective for our customers.

But there must have been a point when someone made the step from spatula to dosing head?

One of the engineers, who had been working at Mettler for 35 years and was considered a bit of a guru in his department, had the idea that sparked it all off: the transport of powder in flour mills was the all-important inspiration and the eureka moment. This moment of inspiration, a good measure of dogged persistence and the expertise on hand in the construction of balances finally resulted in the Quantos automated dosing system.

Up to what size particle can you still dose?

Particles in the order of 900 micrometers (1 micrometer = 10-6 m) can still be easily processed.

What are more typical particle sizes?

Where do customers for these instruments come from?

Until now, practically 80% come from the pharmaceutical industry.

What are the limitations?

When the substance tends to clump together, for example, or absorbs water very quickly. We tested approximately 4,000 samples. In 90 % of all powders the dosing system worked perfectly.  In about 10 % of the samples we were unable to give doses within the tolerance limit we had set ourselves of 0.5 mg. Customers are often happy with a tolerance of 2 mg but we set ourselves this narrower limit to be able to offer customers clear improvements in processing.

Why aren’t these solutions produced on a large scale and then dosed in liquid form? Wouldn’t that perhaps be more efficient?

In theory, yes, but not in practice!

You will have to explain that to me.

It often happens in practice that users know little about the stability of the substances they are using. As a rule, substances in powder form are more stable than in liquid form. If I produce a solution today and then store it for a week, I perhaps don’t know if the substance has changed or not.

So, producing the solutions as and when they are required is still the better option.

Yes, there’s no getting away from it.

In general, the dosing of liquids manually is safer than the dosing of powders. You see when something is spilt and can wipe it away. With powders, it is not so easy. You can assume that about 10 % does not end up where it should be. It may get into the air and then become a significant health risk if harmful substances, for example, are inhaled. With the dosing system, you dose directly into the container in which you later also produce the solution. That means that there is no weighing paper onto which an initial dose is placed. That is much safer as there is then little opportunity for the powder to scatter. 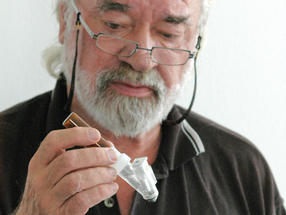 What are the most important advantages of automated dosing?

The time-factor: the dosing is about six times quicker than one performed manually. Then, there is the accuracy and, finally, the fact that significantly smaller amounts of solution can be produced. All the different phases of the process are documented automatically. What is particularly exciting is that there is no need for expensive volumetric flasks in liquid dosing as the solvent is weighed directly in the container. Studies have shown, moreover, that volumetric flasks are a source of errors which occur as a result of either inaccurate reading of the calibrated mark or of mixing-up one flask with another or of cross-contamination of a flask that has not been properly cleaned.

How accurately do the balances in your systems weigh?

Quantos has an accuracy of 5 µg in a target zone of 220 g. That means we can produce a solution with a weight of 200 g with an accuracy of 0.000005 g. Our balances have also now achieved a level of performance which means that only very small amounts of a substance are necessary to be able to perform an extremely accurate measurement. It is practically only just such an automated process that allows dosing in such small amounts. That is particularly important in the use of very expensive or highly toxic substances.

That is really impressive.

We are also very proud of this.

I would like to raise one more issue. If you look at the dosing head, mechanically it does not seem to be all that complicated. That means that it could be copied relatively easily and could certainly tempt product counterfeiters onto the scene. Are you already aware of any such activities?

So far, no. There is a chip on each dosing head. The system wouldn’t work without it. Moreover, the dosing system is controlled by motors that are in turn guided by computer. Such complexity is not so easily copied.

The chip in the dosing head counts the number of doses. What is the upper limit?

After 999 doses the lifespan of the dosing head is at an end. As a rule, significantly fewer doses are undertaken with one head.

Some customers do, but then only up to 40 doses. After 39 doses, the system then signals that only one more dose can be undertaken. The hardness of the powder is the problem here, the limit is set to ensure no detrimental effect to the powder. This is possible thanks to the intelligence built into the dosing head.

Thank you for talking so openly.