European Lead Factory: A paradigm shift in R&D for the pharmaceuticals industry

Developments in the pharmaceuticals industry are currently characterised by major upheavals due to the expiry of a wide range of revenue-generating products, paired with a lack of new API candidates and a burgeoning generics industry, which, riding the wave of severe cost pressures on healthcare systems, is pushing its way into the foreground of the prescription-only drugs market, with ever more far-reaching consequences. Responses to these changes in the research departments of the pharamceuticals sector are both diverse and inconsistent.

On the one hand, technologies and potential APIs are being bought-in at increasingly early phases. On the other, pharmaceutical corporations are merging and internal expenditure – especially for R&D – is seeing regular cuts. Research units within pharmaceutical corporations have been and continue to be shut down wholesale, paired with simultaneous attempts to counter these R&D productivity losses by outsourcing to countries such as China and India. Often, however, successes are extremely modest, with the lesson learned being that outsourcing to Asia cannot indefinitely compensate for the innovation lost by closing internal departments nor ensure the retention of the ability to innovate. Since the geographical outsourcing strategies mentioned often fail to bring the hoped-for results – i.e. to fill the API pipeline and ensure the company’s existential success – a new course needs to be set towards innovation. The absence of an adequate portfolio of drug candidates and the future downturn in sales heralded by patent expiry are currently both a curse and a blessing: they are the driving forced behind the evaluation of new approaches to “innovate the innovation process” aimed at ensuring the survival of the pharmaceutical companies into the long term. Not least because, in these challenging times, the pharmaceutical industry has kept one thing very much in mind: the success of their business model is crucially dependent on innovations that result from successful R&D work and the further development of this work into marketable drug candidates.

Based on the realisation that innovation and creativity cannot be casually outsourced, the research arm of the pharmaceutical industry is looking for new paradigms, a new course to take to ensure the efficient deployment and utilisation of existing local creative and innovative potential that it is has spent long decades developing.  Unfortunately, a great deal of time and know-how is lost in translating university- and research institute-level innovation into real-world products. One highly promising approach designed to counter the suboptimal exploitation of creative ideas from drug research is “Open Innovation”. Open Innovation focuses on the exchange of experience and knowledge between academic departments, creative biotech companies and the research arm of the pharmaceuticals industry with the aim of ensuring the rapid progress of interdisciplinary innovations from their origin (universities and research units) to their application and exploitation. It thus aims to bridge differences of interest and motivation in terms of both the approach taken and results achieved.

To close this translational gap, multiple public private partnership (PPP) programmes have been launched in Germany at both the national and EU level. These programmes have been designed so as to combine insights from academic research with the efficiency of small and medium-sized enterprises (SMEs) and the product expertise available to big pharma, thereby mapping out an interdisciplinary, innovative and efficient drug research process. One of these initiatives is the European Lead Factory, a pan-European drug research platform funded by the Innovative Medicines Initiative (IMI). 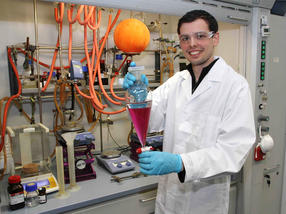 Some 200,000 new compounds are to be synthesised in 5 facilities across Europe.

The European Lead Factory (ELF) is a novel, pan-European and interdisciplinary innovation platform started by an international consortium of 30 member organisations from across Europe as a public-private partnership. The objective of this PPP – the only one of its kind to date – is to significantly accelerate integrated drug research within the European region. It is funded by the IMI. Structured as a five-year project, one key focus of the European Lead Factory is the synthesis of innovative compounds of interest to medicinal chemistry. The high number of chemical compounds that the ELF has scheduled for synthesis during its lifetime, has necessitated a pooling of effort by experienced specialists in medicinal and synthetic chemistry from both practice and research in the form of a virtually-coordinated European synthesis factory. This one-of-a-kind, pan-European network features close-knit collaboration between seven specialised SMEs and academic partners from France, Germany, Hungary, the Netherlands and the UK. Alongside its own synthesis of part of the substance library and related crowd-sourcing work, namely the organisation of specific appeals to the European chemicals community to submit innovative pharmacological chemical scaffolds (structural frameworks), Taros Chemicals also provides “Taros Gate”, which guarantees process control, data storage and IP (intellectual property) security for these synthesis activities.

Pharmaceutical companies possess extensive substance libraries whose records can be screened during the search for potential APIs. As a rule, access to these kinds of internal libraries is heavily restricted and is usually prohibited for parties external to the company in question. During the European Lead Factory project, seven European pharmaceutical companies will jointly furnish the consortium with 300,000 chemical compounds from their individual repositories. A substance library featuring an estimated 200,000 new compounds will be developed as a joint effort between specialised SMEs and academic research partners. Termed the “Joint European Compound Collection”, this consolidated library will hold up to 500,000 compounds, whose details will be accessible both to project partners and public research institutions as well as European biotech companies working in the field of drug development. A pipeline of recommendations for additional new and innovative scaffolds will be organised using calls (public appeals) from 2014.

Another component in the European Lead Factory of no less importance is the European Screening Centre.
The European Screening Centre has the objective of identifying and developing biologically relevant assays (test procedures). Simultaneously, the Centre will also screen substance libraries for biological starting points
of use in drug development. Located in Scotland and the Netherlands, both screening sites have ultramodern high-throughput screening (uHTS) facilities at their disposal, plus the logistics systems to handle the 500,000 substances and their testing for biological activity using new assays.

The project’s total budget amounts to around EUR 196 million over 5 years. Of this sum, EUR 80 million is
being provided from the European Commission’s “Seventh Framework Programme for Research” (FP7) and EUR 91 million as an in-kind contribution from member companies of the European Federation of Pharmaceutical Industries and Associations (EFPIA).

The remaining EUR 25 million stems from other funds supplied by non-EFPIA consortium members.
Should the project’s objectives be achieved within its allotted five-year term, the European Screening Centre, participating SMEs and academic partners will endeavour to pursue – and where possible, expand – a long-term collaborative venture in drug candidate research beyond this period and at a pan-European level.