2009 and 2010 were years of restructuring, redistributing existing resources and increasing  efficiency in the pharmacological industry.In 2011 many of the people in charge are looking to the future again with a visionary foresight – new, innovative technologies and new paths, other than the well trodden ones, move into the spotlight. A year of new starts and chances, also in the materials testing sector, has begun. 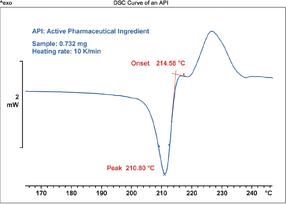 The coupling of analysis methods yields far more information than the sum of the individual methods.
This shall be described using two current examples.

1) Dynamic Differential Scanning Calorimetry (DSC) and microscopy
DSC measurement curves often show effects which cannot be immediately interpreted and understood. In these
cases it is helpful to watch what actually happens to the sample-substance during the measurement. Solid-solid phase changes, overlapping effects such as melting and degradation, as well as artefacts, resulting for instance from moving the sample, are thus identifiable. Both the measurement curve and the visible chronology of the change of the sample are documentable and can therefore be retraced.

An example for this is given in Figs. 1&2. The DSC – measurement curve (Fig. 1) of an active ingredient (API) demonstrates two effects – one endothermic with ­a maximum of 210.8 °C, and one exothermic at about 228 °C. A smaller effect at 214 °C can also be measured. Originally the endothermic effect was interpreted as a melting process. DSC-microscopy, however, provides different results. Figure B shows that the substance does not melt at 211 °C at all. This effect is caused by the evaporation of crystal water, as the TGA-MS measurements showed. The colour change of the sample allows the conclusion that the sample immediately starts to degrade after melting. The effect at 214 °C can therefore be seen as the sum of two simultaneously running processes: endothermal melting and exothermal degradation. 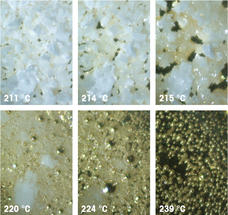 Fig. 2 Microscope images of an active ingredient at 6 temperatures

Combination of the temperature modulated DSC-technique with a long established mathematical procedure (Parametric Estimation Method, PEM), creates a new method, called TOPEM®. This offers the opportunity to demonstrate overlapping sample effects and differentiate frequency dependent effects from independent ones. This considerably eases the interpretation of the measurement results . The example given in Fig. 3 shows a onventional DSC-measurement (black) of a pharmaceutical formulation and the measurements with TOPEM®-DSC (heat capacity, red & non-reversing heat flow, blue). The total heat flow (black) shows several, overlaying endothermal effects: One broad effect between 30 and 140 °C, as well as two sharp effects at about 60 and 125 °C. An interpretation without further information is nearly impossible.
The TOPEM® – measurements shed some light: The heat capacity curve (red) shows that the effect at 60 °C results from a glass transition with overlying enthalpy relaxation, whereas the second at about 125 °C is resultant from a phase conversion. The latter can be disclosed from the frequency dependency of the peak maximum. The broad effect between 30 and 140 °C is caused by the evaporation of a liquid. Via integration of this effect, the moisture content of the sample can be additionally calculated. It is 6.5 %. 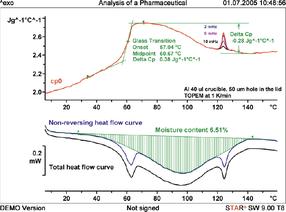 Look into the future

In the future thermal analysis methods will, through the development of improved sensors or combined techniques, continue to provide additional information about materials.

A further current trend is the miniaturisation of sensors, to heat and cool as quickly as possible. This, among other things, is important, when the user is interested in the verification of polymorph substances. Heating speeds of up to 2.4 Mio K / min and cooling speeds of up to 240,000 K /min can be reached by modern chip calorimeters with MEMS – technology (Micro-Electro-Mechanical System) and as of late by a commercially available instrument: the FlashDSC 1 (Fig. 4). 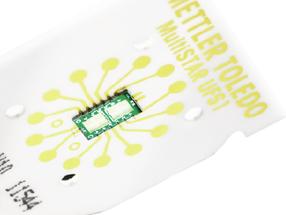 This instrument is then at the same time reactor and analyser In the first stage different aggregates of the material can be created before they are analysed by the heating procedureand it is also not necessary to change anything on the probe or the instrument.

With this structure we can expect valuable information, especially in the area of polymorphism screening or for substances, where the degradation already begins when they start to melt.