About the reading of genes in the Book of Life

From a pluripotent stem cell a muscle cell or a liver cell can form, which despite their difference in
appearance, are genetically identical. From one and the same genotype, therefore, the most diverse phenotypes can be formed – epigenetics is making it possible! It is a very exciting area of research in developmental biology as well as in pathogenesis and drug discovery.

The human genome consists of approximately 28,000 genes and is the foundation for human development.
To create a functioning organism from this basic plan, additional mechanisms are required that ensure that,
in a particular cell type, only particular genes are read at a specific time. The process behind this regulation is called epigenetics. Figuratively speaking, the human DNA can thus be seen as the book of life, while epigenetic processes are the bookmarks in this book. The epigenetic mechanisms ensure the regulation of gene transcription, which also remains intact, regardless of cell division. For example, liver cells are formed from a dividing liver cell, although it also carries the genetic material for a nerve or muscle cell.

Thus, epigenetic processes regulate gene transcription without altering the genetic code itself. This „epigenetic code“ can be inherited by daughter cells. Epigenetics thus plays an important role in the development of living organisms. A particularly striking example is the development of a worker bee or a queen from genetically identical bee larvae, depending on the nature of the food (see Fig. 1). There is also growing evidence of an epigenetic inheritance pattern in the daughter generation (children and grandchildren). Fig. 1 From genetically identical bee larvae either worker bees or a queen, are developed depending on the food (Photos A. Spürgin, Freiburg)

At the molecular level, the epigenetic marks are chemical modifications of DNA or the proteins associated with it. There are two basic processes: methylation of the DNA base cytosine and various modifications of the N-terminal ends of histones. Recent research also shows an impact of microRNAs. For DNA methylation, the attachment of a methyl group to the cytosine base results in the formation of 5-methylcytosine (see Fig. 2). This process is catalysed by DNA methyltransferases and generally leads to gene silencing. Histones are small, basic, highly conserved proteins, which play a significant role in the packaging of the DNA in the cell. They contain, in their N-terminal ends, many basic amino acids (lysine and arginine), which can be biochemically modified [1]. Methyl, acetyl and phosphate groups, and larger molecules such as ubiquitin and ADP-ribose can be attached or cleaved off from these amino acids [2]. Depending on the type of modification, ­this  can  lead to gene silencing or to gene activation. Responsible for these changes are the so-called histone-modifying enzymes. The best studied enzymes are those which are responsible for the acetylation and methylation equilibrium (histone acetyltransferases and histone deacetylases resp. histone methyltransferases and histone demethylases). Histone acetyltransferases (HATs) transfer acetyl groups to the ε-amino group in lysines using the cofactor acetyl-CoA. Acetylation generally  leads  to a loosening of the chromatin, resulting in an increased reading of the affected genes. The antagonists of the HATs are the histone deacetylases (HDACs). These cleave off acetyl groups from lysine residues and usually lead to gene silencing (see Fig. 2). However, there are also genes described where deacetylation may lead to activation [3]. Methylation of histones can occur both at the amino acid arginine and the amino acid lysine. Consequently, a distinction is made between arginine-(PRMT) and lysine-(KMT) methyltransferases. There are different degrees and patterns of acetylation and methylation possible. This increases greatly the number of possible epigenetic states leading to different patterns of gene expression of a given cell. Depending on which amino acid is present in the methylated form, this results in an active or suppressed expression of certain genes [4,5]. Enzymes releasing methyl groups are the lysine-specific demethylase 1 (LSD-1) and a group of enzymes that  carry a so-called JmjC domain [6,7]. 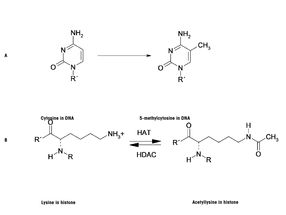 Epimutations as a cause of disease

An epigenetic dysregulation of gene transcription may contribute to the development of diseases. For some cancers, such as acute promyelocytic leukaemia, aberrant epigenetic changes could be determined as the underlying cause [8]. Other diseases, in which misregulated epigenetic processes play a role, are currently the subject of intense research. For example, the influence of epigenetics is investigated in neurodegenerative diseases such as Alzheimer‘s disease or Huntington’s, and also in various metabolic diseases such as diabetes [9,10]. In contrast to gene mutations, these so-called epimutations are reversible per se, and thus in certain cases, can also  be influenced by drug therapy (see Fig. 3).

On the way to new drugs

In the last few years several drugs which affect epigenetic mechanisms, have been approved for cancer therapy.
Two inhibitors of HDACs are currently in use in the U.S. for the treatment of advanced cutaneous T-cell lymphoma. These are Vorinostat (Zolinza®), an inhibitor with a hydroxamic acid structure and the cyclic peptide Romidepsin (IstodaxTM). About 10 HDAC inhibitors are currently in various stages of clinical testing (Overview: [11]). The most advanced here is the development of Panobinostat and Belinostat, which are both in Phase III.

Azacitidine (Vidaza®) is also the first epigenetic drug available on the European market. It is a nucleoside analogue that inhibits DNA methyltransferases in their activity. Azacitidine is approved for the treatment of myelodysplastic syndrome. In the U.S., in addition to this inhibitor, its deoxy-analogue Decitabine (DacogenTM) has also gained approval. Epigenetics represents a fascinating field of science. Already today there are signs of its fundamental
importance for human development and also in the pathogenesis of many diseases, above all in cancer; epigenetic processes seem to play an important role. In addition, our research group also investigates, for example, the selective inhibition of epigenetic enzymes from the parasite Schistosoma mansoni, to find new drugs for the treatment of the tropical disease schistosomiasis (see link: settrend.cebio.org). The future development of epigenetic research and in particular drug development can be awaited with great interest.