How it affects the human brain

Caffeine is the most widely consumed psychoactive substance worldwide. It supplies the active ingredient in beverages such as coffee, tea and energy drinks. Caffeine can focus vigilance and attention, reduce drowsiness and enhance the ability to perform cognitive functions. Its neurobiological effects are ascribed to the antagonisation of cerebral adenosine receptors. Only very recently have molecular imaging techniques now made it possible to investigate caffeine’s sites of action directly in the living human brain.

For the primary producer of caffeine – the coffee plant – it is a poison that protects against insects. According to legend, the fact that caffeine has a more gratifying effect on other organisms was first noticed by goatherds in the Kingdom of Kaffa, located in modern-day Ethiopia. After grazing on the red fruits of the coffee bush, their animals became so frisky that the herders tried the fruits themselves and so found they could turn the night into day. In the 17th century, the coffee bean – roasted, ground and turned into a highly palatable beverage – began its triumphant advance into Europe and the four corners of the known world. Today, caffeine is the world’s most widely consumed psychoactive substance. Despite this fact, its stimulating effect – and the site of its action in the brain – remains only partly understood. The use of modern molecular imaging techniques enables us to come closer to answering these questions. 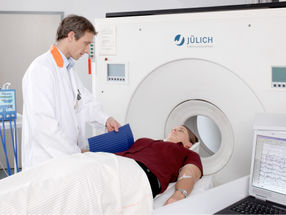 Descriptions of caffeine’s method of action usually focus primarily on its acute stimulating effects. Caffeine binds to cerebral adenosine receptors as a non-selective antagonist. One function of adenosine’s G-protein-coupled receptors (A1, A2A, A2B, A3) is to modulate the receptor efficiency of a wide range of neurotransmitters – e.g. by altering conductivity for K+- and Ca2+ channels – as well as cell metabolism, where they influence the activity of adenylate cyclase and phospholipase C. Adenosine is therefore properly classified not as a neurotransmitter but as a neuromodulator, whose concentration changes depending on the energy states in cells. The higher the level of energy consumption, the faster the concentration of adenosine rises; it is also a degradation product of ATP (adenosine triphosphate), a key supplier of energy to nerve cells and glial cells.

Another of adenosine’s functions is also possibly linked to this feedback mechanism: if the body experiences unusually long periods of wakefulness, adenosine levels in the brain gradually rise until finally brought back down by restful sleep. This observation has led to the hypothesis that adenosine could be a key substance that drives the need to sleep. On this view, its sleep-inducing effect is primarily transmitted by the adenosine receptor A1 subtype, which is expressed ubiquitously – but not homogeneously – in the brain. As an effective blocker of this mechanism, caffeine can thus temporarily lessen the urge to sleep. This not only correlates with the personal experience of many coffee drinkers, but can also be proven using electroencephalography, where the EEG shows characteristic changes to brainwaves.

One population of cholinergic neurons in the basal forebrain is ascribed a key role in regulating the process of falling asleep. These cells project into broad regions of the neocortex, where they also control the input sensitivity of the cortical neurons. The cholinergic projection neurons feature A1-type adenosine receptors, which are significantly upregulated after prolonged periods of wakefulness or sleep deprivation. Using molecular imaging techniques, we have confirmed that these results from animal experimentation studies also apply to humans. Interestingly, however, the A1 adenosine receptors in humans also showed pronounced upregulation following sleep deprivation in other parts of the brain – especially those of the neocortex. Accordingly, adenosine appears to play a substantial role in the regulation of homeostatic sleep regulation, i.e. with interdependence on neuronal activity and energy metabolism. As a result, caffeine exerts an influence on the sleep-relevant A1 receptors in both the basal forebrain and the neocortex, thus delaying the “go to sleep” signal.

Fig. 2 (left) Magnetic resonance tomography (MRT) of the lateral view of a test subject’s head. (centre) Adenosine receptors (bright orange), the binding sites for caffeine, occur throughout the brain and are especially proliferous in the cerebrum; made visible here by PET and the targeted tagging substance [18F]CPFPX. (right) After injection of caffeine (here: 4.1 mg per kg body weight), the adenosine receptors are no longer visible on the PET scan, since caffeine has displaced the tagging substance at the receptors. VT is a metric for the tagging substance.

An anatomy of caffeine binding

By deploying position emission tomography (PET), it now also proved possible to determine the exact site for the binding and action of caffeine in the human brain directly in the human brain (info box and fig. 1). Test subjects received a marker substance ([18F]CPFPX) by injection; this ligand binds to the A1 adenosine receptor subtype and enables the distribution of these receptors to be detected in the living brain. If we combine the PET experiments with another imaging technique, magnetic resonance tomography (MRT), this enables the precise anatomic localisation of the brain regions in which caffeine displaces the tagging molecules from their receptor binding sites (fig. 2). These regions include the thalamus. Also termed the “gateway to the cerebral cortex”, the thalamus influences the brain’s readiness to absorb information. Another is the hippocampus: this plays a key role in the transfer of learned behaviour from short-term to long-term memory. And, finally, the cerebral cortex (neocortex), whereby high levels of receptor density are exhibited in particular by regions known as “associ­ation areas”: one of their functions is to collate content from separate regions of the brain, so as to e.g. integrate new sensory perceptions with pre-existing, stored memories. One may therefore surmise that it is specifically these neocortical brain regions in which caffeine boosts both alertness and the ability to perform cognitive functions.

It’s all in the dose

In the experiment, study participants received different dosage levels of caffeine intravenously. These levels equated to the quantities of caffeine typically found in two to four cups of coffee. To ensure better controllability for the experiment, the caffeine was not administered orally (drunk) but intravenously: this also permitted calibration against the test subjects’ weight and the precise setting of blood caffeine levels.

The PET experiments showed that caffeine entered the brain without any time lag: once there, it displaced the radioactive tagging molecule from the adenosine receptors – and with astonishing success. Even a quantity of caffeine no greater than average daily consumption levels (four to five cups) is sufficient to block about 50 % of the adenosine receptors (fig. 3). One may therefore surmise that larger quantities of coffee primarily act to trigger or intensify side effects such as an accelerated heart rate, a rise in blood pressure or shivering, but are
in fact unable to further improve cognitive performance.

The above applies only to an acute rise in caffeine levels, however, since there is a habituation effect: anyone who regularly drinks a lot of coffee alters the binding capacity of the receptors and thus requires a higher dose of caffeine to retain the stimulating effects over the long term. 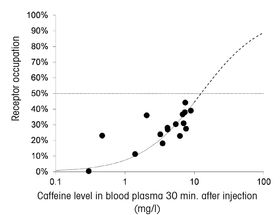 Fig. 3 Correlation between the level of caffeine in the blood and the occupation of A1 adenosine receptors in the brain. The caffeine present in just four cups of coffee can be sufficient to block half of all the brain’s binding sites.

This weakening of caffeine’s effects is further worsened by the fact that the number of adenosine receptors decreases as a person ages. We investigated the concentration of adenosine receptors in various regions of the brain in a study involving a group of 36 test subjects with ages ranging from 22 to 74. In many regions of the brain, study data revealed areas with a significant reduction (of up to 34 %) of identifiable receptors. The average receptor loss was 23 %, corresponding to 5 % per decade as a person ages (fig. 4). Both phenomena – i.e. decreased sensitivity and a reduction in adenosine receptor concentrations – contribute to a change in the effects of caffeine experienced by many people during their lives: its stimulating, sleep-delaying quality is diminished and sometimes even the opposite effect is experienced. 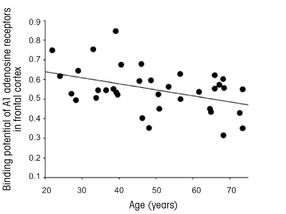 Fig. 4 Caffeine binds to adenosine receptors in the brain, and preferably the most numerous A1 subtype. As a person ages, receptor concentrations fall by approx. 5% per decade, weakening the effects of caffeine.

While we usually want the stimulating – and in high doses, even exhilarating – effects caffeine offers, excessive consumption can lead to health problems. One of the commonest is insomnia, which results from disruption to regulation of the sleep-wake cycle. With some people, the chronic consumption of coffee leads to a dependency that can even produce withdrawal symptoms when the person stops taking the “drug”. One may conclude that these effects stem primarily from the A2A subtype, which has a direct physical relationship with the brain’s dopaminergic reward system. Yet although caffeine’s effects are positive and directly inducible – qualities that should actually rather favour the development of addiction – its addictive potential is in fact surprisingly weak. Clarification of the mechanisms underlying this idiosyncratically “benign” nature of coffee dependency could make a major contribution to addiction research.

The association cortex, caffeine’s primary site of action, is also part of the cerebrum, which is also the location where a dreaded process of cerebral decay makes itself particularly prominent: Alzheimer’s disease. More recent epidemiological studies indicate that long-term, regular consumption of coffee may offer protection against neurodegenerative diseases. Caffeine’s potentially neuroprotective effect does not necessarily have to involve neuronal receptors, however: Brain vessels also possess adenosine receptors that can – e.g. under ischaemic conditions – lower neuronal activity levels while simultaneously improving blood supply to the affected tissue.  Discussions have posited a vascular component to the genesis of Alzheimer’s disease for some time now. And so we seem to be starting a new chapter in the millennia-old story of caffeine.